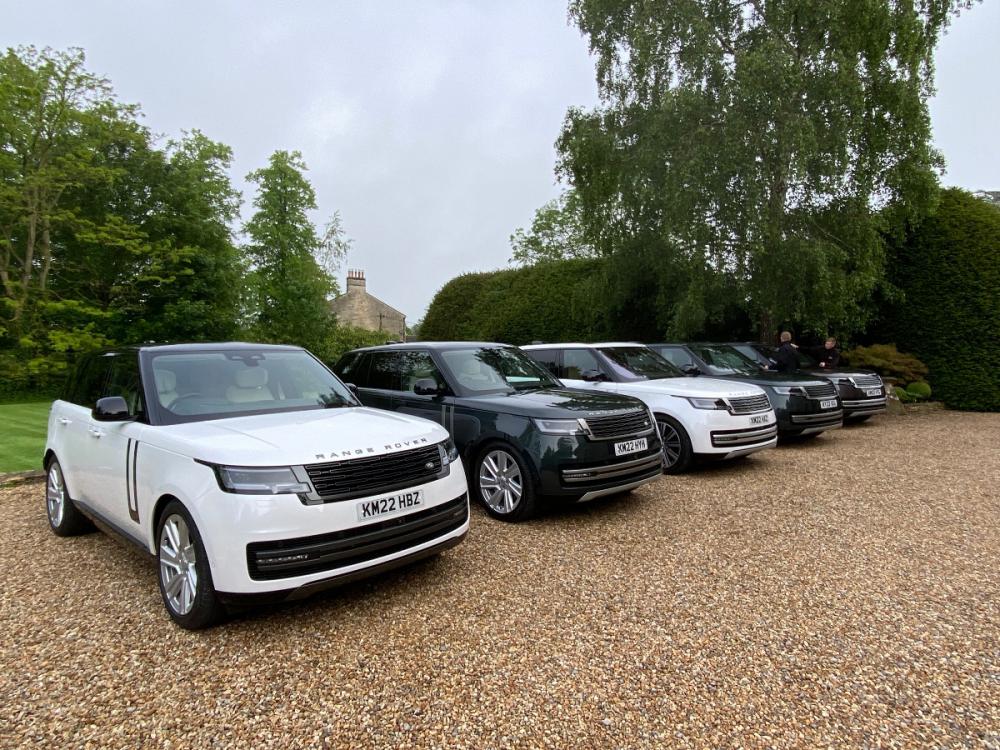 On 17th June 1970, we witnessed the arrival of the Range Rover. The story however begins in the mid-1960s when Rover’s new projects engineering chief, Charles Spencer ‘Spen’ King hatched a plan to combine the comfort and on-road ability of a Rover saloon with the off-road ability of a Land Rover.

Development began during the late 1960s with the first model drawing critical acclaim from the world’s media. Here was a car with unparalleled off-road ability, but one that would be equally at home outside a top hotel once the mud had been washed off.

Some fifty years later, the fifth iteration of the luxury 4x4 has just been launched and an invite to the UK Media Launch saw me once again Cotswolds bound. The event promised plenty of time both on and off road. 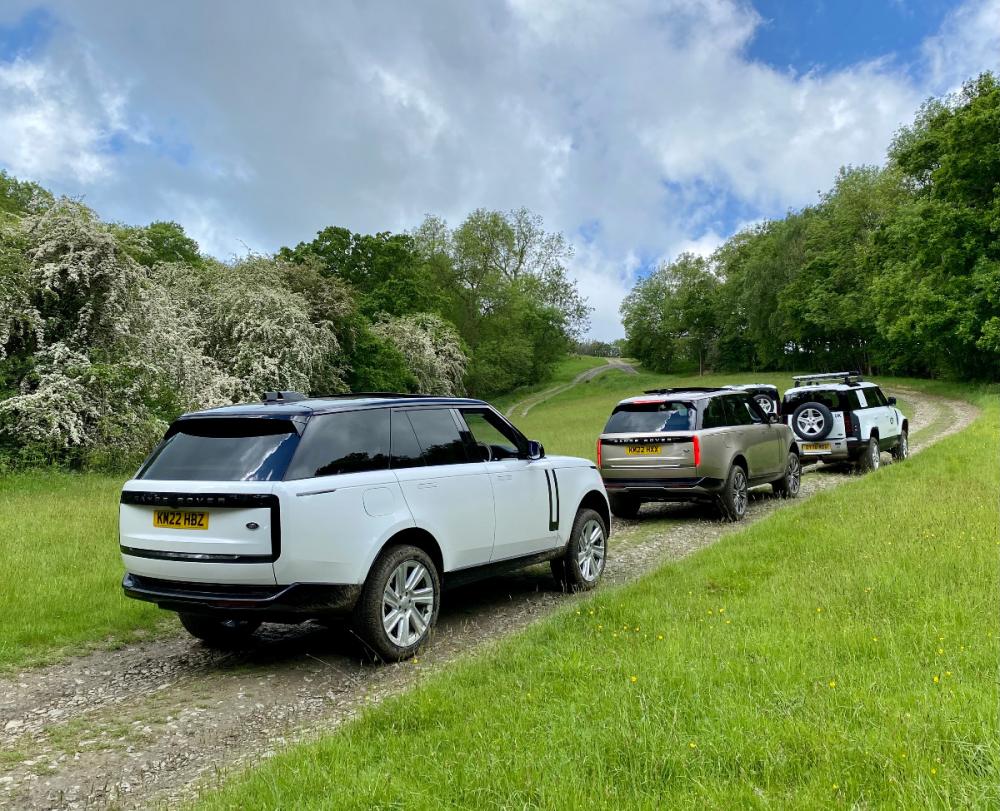 How do you reinvent an icon must surely have been the question asked by the designers, the task being to update and improve without alienating existing customers? Therefore, at first glance at least, the design appears to be evolutionary. However, with recent experience of the outgoing model, it is easy how things have evolved.

Simplicity is the order of the day, with many of the old car’s fussy details removed. In their place, less creases on the doors, flush door handles, more subtle side vents and slimmer headlights to the front. The flush-fitting side glass may not be immediately obvious and a quick stroll around the back shows the new slim, vertical LED lights which are cunningly hidden until lit.

Climbing aboard, all seems quite familiar with high quality materials in abundance. However, compared with the fourth-generation model, less is more has been the philosophy once again, with much of the car’s controls taken care of by the 13.1-inch infotainment screen. I was pleased to note that the heating and ventilation controls have been kept separate. 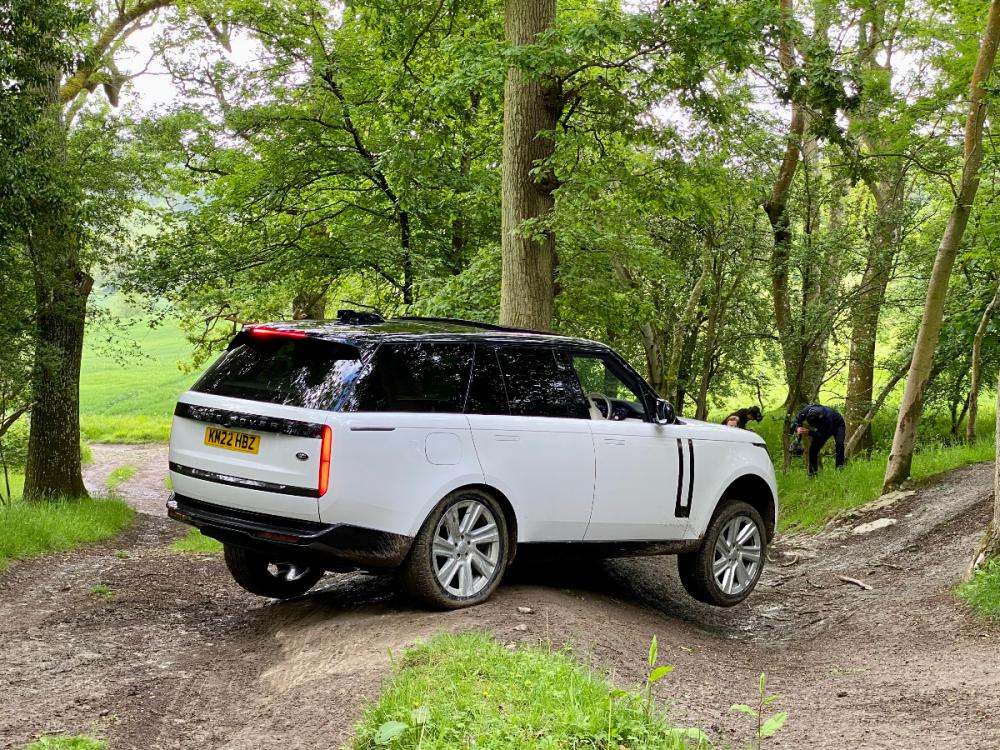 Screen controls offer a haptic function, with a reassuring click registering each push, though this can be switched off if so desired.

A new gear selector sprouts from the centre console. Gone is the rotary dial, which I rather liked, and in its place is a more conventional lever for the automatic transmission. A button at the back must be pressed to select a gear, a little awkward in my opinion.

The familiar Land Rover Terrain Response system is activated by a round knob which pops up when pressed. Auto mode will be fine most of the time, though a quick turn to the left selects ‘Dynamic’ mode, highly recommended if you like to get a shift on. 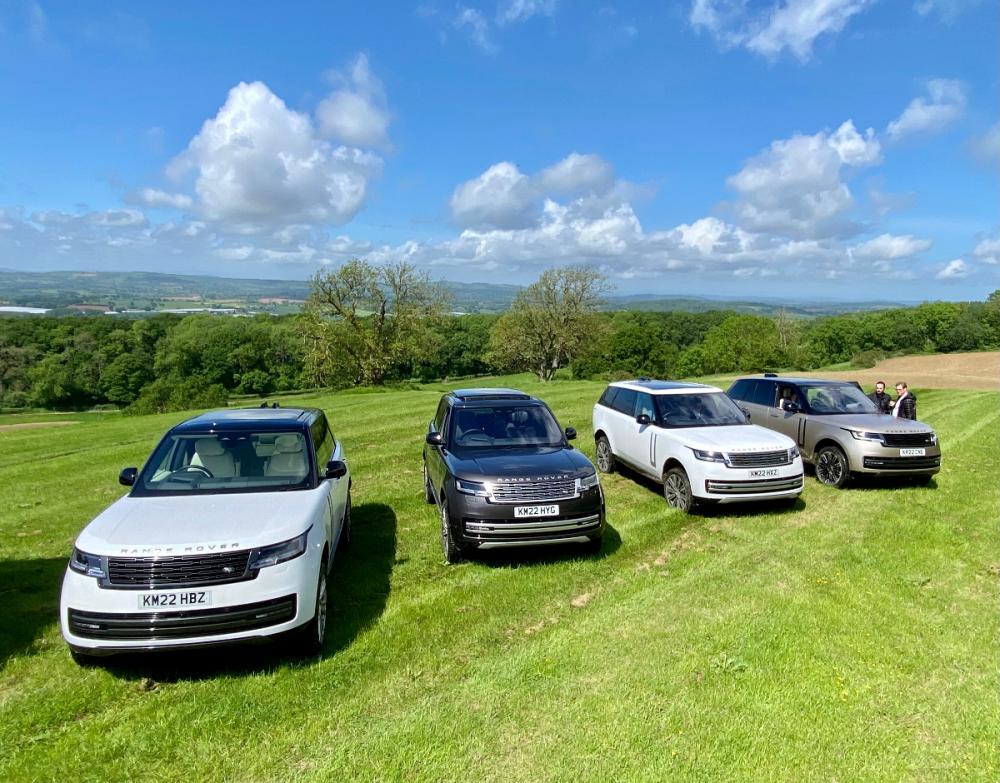 The driving position is suitably commanding, higher than most competitor SUVs which makes placing the car relatively easy, even on narrow country lanes. All extremities are easy to see, though the various cameras and sensors will help guide you when manoeuvring in tight spots. In addition, the Range Rover is now fitted with rear-wheel steering which not only improves high speed stability, but also dramatically reduces the car’s turning circle. It certainly impressed.

Seats front and rear are likely to be more comfortable and supportive than your favourite armchair and the quality of the leather most certainly higher. For those who regularly carry adults in the rear, a long wheelbase version can be had, though legroom in the standard version is generous. There is headroom to spare whichever version you choose.

In another Range Rover first, there is the option to specify a third row of seats. Having clambered in with relative ease, thanks to the electric folding mechanism of the second row, there is space for reasonable sized adults to relax in comfort too. Children especially will love it, being far enough away from their parents to get up to mischief. 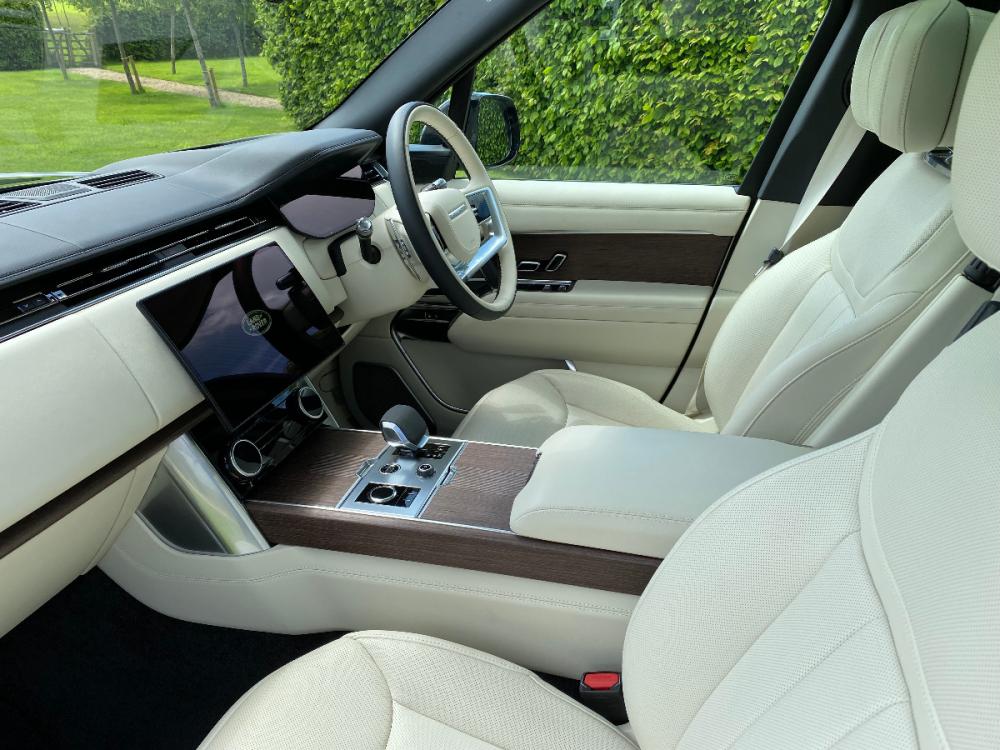 A range of engines are offered. Diesel still figures highly, though there are two powerful petrol motors too. Of considerable interest are the two plug-in hybrid models which should have an electric only range of around 70 miles. Ideal for those with home charging I would suggest. A fully electric version is due in 2024.

My test car on the launch event was diesel-powered and dare I say it, all the better for it. The 3.0-litre twin turbocharged motor is a cracker, with a huge 650Nm of torque which ensures that there is power aplenty whatever the situation.

The 0-60mph times sprint time of just 6.5 seconds feels readily achievable and overtaking manoeuvres can be accomplished swiftly and safely. With excellent sound deadening, the engine is rarely heard, as exploring the upper reaches of the rev range is completely unnecessary. 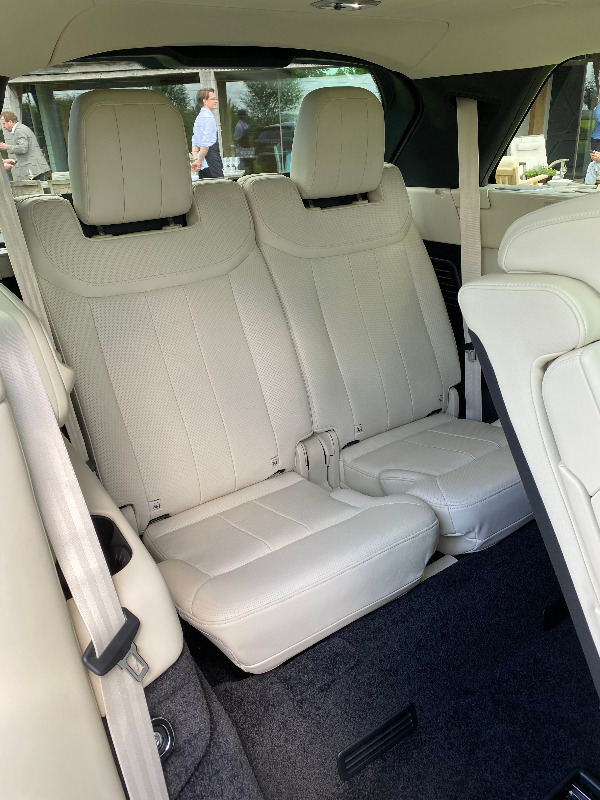 Another advantage of diesel power is the WLTP stated fuel economy of 35.8mpg and this combined with a generous sized fuel tank means six or seven hundred miles can be travelled without stopping to refuel.
Aiding smooth progress is a ZF eight-speed automatic gearbox which goes about its business smoothly. It is one of the best and suits the refined Range Rover just perfectly.

Our test route encompassed most driving conditions, with high-speed motorway cruising a peaceful affair. A little wind flutter from around the door mirrors perhaps, only noticeable due to the absence of any other sound.
Fast A-roads are a Range Rover forte, with slower cars dispatched with a mere prod of the right foot. How dare they get in the way! On twistier sections, selecting ‘Dynamic’ mode sharpened things up a tad, with less body roll to upset the calm of the cabin.

The electronic air suspension has improved the Range Rover’s ride, which admittedly was none too shabby before. Most noticeable at low speeds, where improved cushioning ensures that even deep potholes pass almost unnoticed, impressive given the 22-inch alloy wheels on the test car. 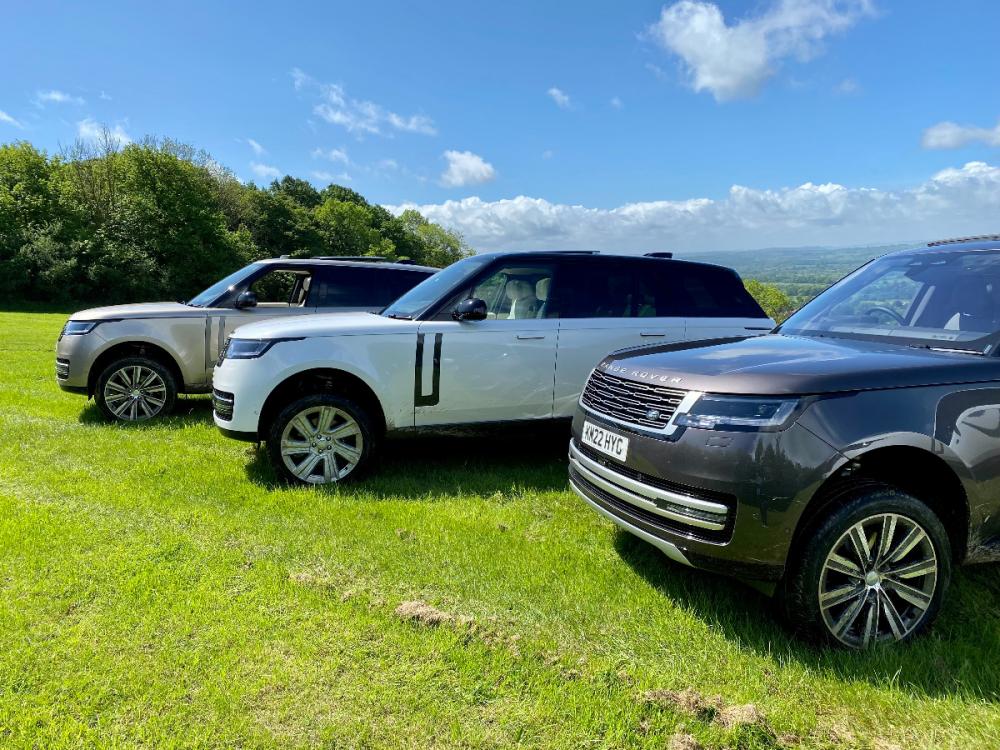 Our destination was of course Land Rover’s Eastnor Castle, a delightful setting but home to acres of challenging off road tracks. Some overnight rain had nicely watered the ground, though the estate was bathed in glorious sunshine, all the better to enjoy one of the many highlights of the launch event.

The cars were set up for us, with low range selected and the Terrain Response put into a suitably muddy setting. With all that ample torque, the Range Rover romped round at barely more than tickover. Slippery ascents, soggy descents and some cross-axle wheel off the ground shenanigans were all accomplished with ease.

Almost too easy as I do like a bit of a challenge when driving off road. In reality I just had to steer a central course along the lanes, with the car’s electronic trickery taking care of everything else. To get a Range Rover stuck, you would have to do something very silly indeed.

I expected no less of Land Rover’s range-topper, and all was accomplished without the need for specialist off-road tyres.

In keeping with the luxury lifestyle likely to be enjoyed by Range Rover owners, an excellent lunch cooked by well-known chef Simon Stallard provided fortification for the drive back to our Cotswold base. 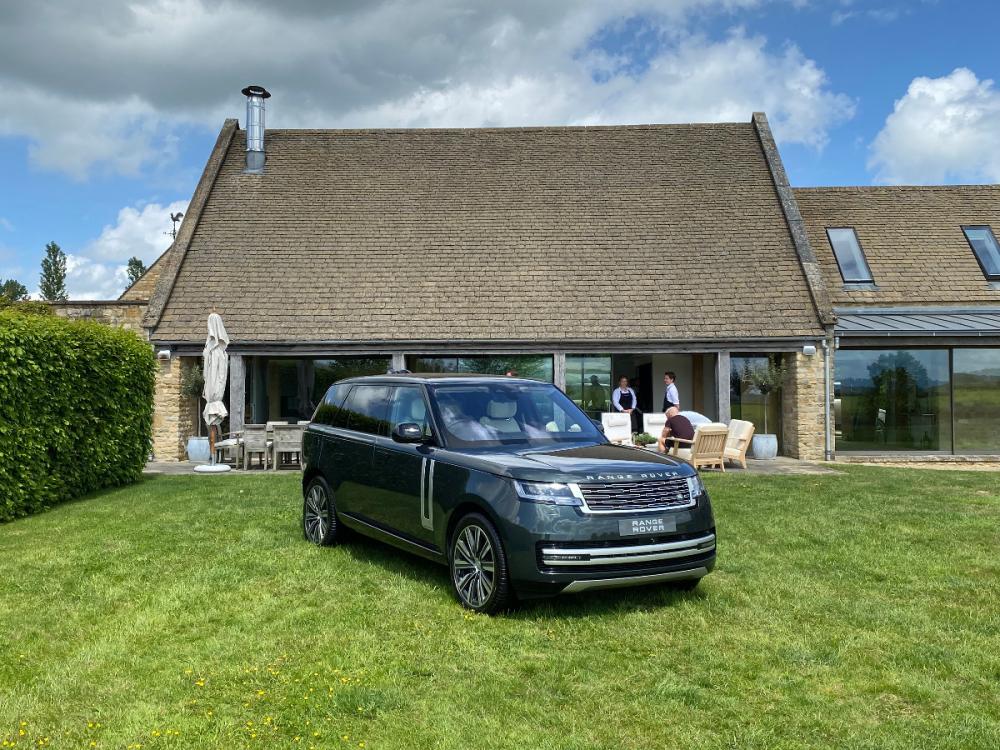 Prices now start at a smidgen under £100,000 and I gather that the order books are bulging. So, if a luxurious, family-friendly 4x4 is your heart’s desire, the new Range Rover will deliver in spades. Elegant, refined, well equipped and lovely to drive, the car will look equally at home in a muddy field or parked outside a top London hotel.

And that dear reader, is at the heart of Range Rover ownership. A jack of all trades, and a master of them all. If you have the wherewithal, place your order without delay.