From the town centre car park, walk south on Brook Street, crossing over the street outside HSBC. Continue along Wells Road. At the junction of Crossbeck Road, leave the tarmac to join the waymarked footpath through the gate on the left, then keep right as the path splits to ascend to The Tarn. Popular for ice skating during the Victorian Era, this idyllic body of water nestled on the moorland edge would be an ideal place to while away a long, summer afternoon. 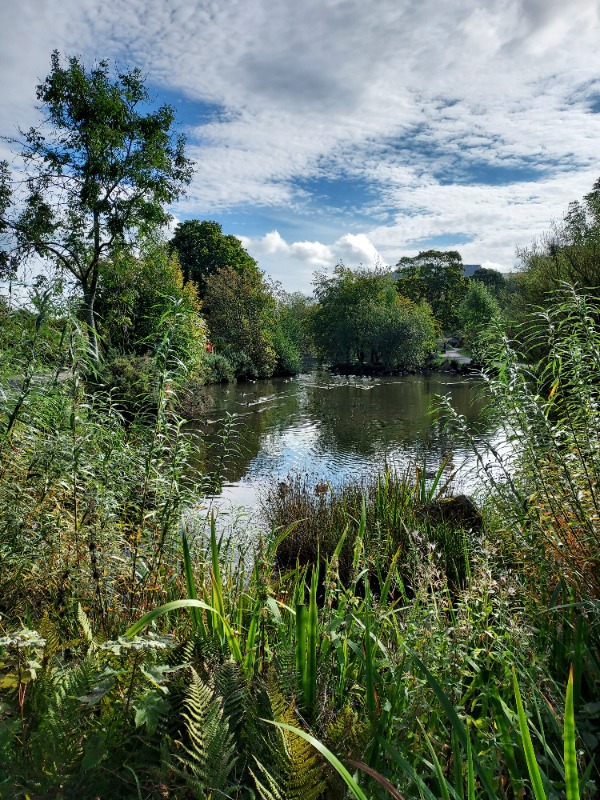 The Tarn Ilkley
Take a loop of the Tarn, before progressing upwards along a path that leads to White Wells. Here, originally, two baths were built in 1791, with an advertisement placed in the Leeds Intelligencer purporting to the medicinal benefits of the spa bath. Today, inside the building, a single plunge pool remains, and can be used by the public. New Year’s Day is apparently a popular occasion for a plunge, perhaps with revellers welcoming the cold-water stimulation to their blood circulation, which may be somewhat sluggish after festive over-indulgences!

From White Wells, continue southwards, ascending the Dales Way Link. A clear, easy to navigate pathway, initially with steps, that flattens as it reaches the moorland plateau. The path becomes a flagged, which you follow until a boundary stone on your right. Leave the flagged path, continuing on the Dales High Way to come to the spectacular Twelve Apostles Stone Circle which dates to the Bronze Age. Considered one of the most damaged prehistoric sites in West Yorkshire, it remains a majestic and awe-inspiring spot.

You can return to the boundary stone to re-join the flagged path where you then need to head in a westerly direction, continuing on stone flags. Crossing White Crag Moss, you’ll reach a trig point. Pursuing the pathway, you will then come to the Thimble Stones, however before then (although can be easily missed) you will also pass one of Simon Armitage’s Stanza Stones. 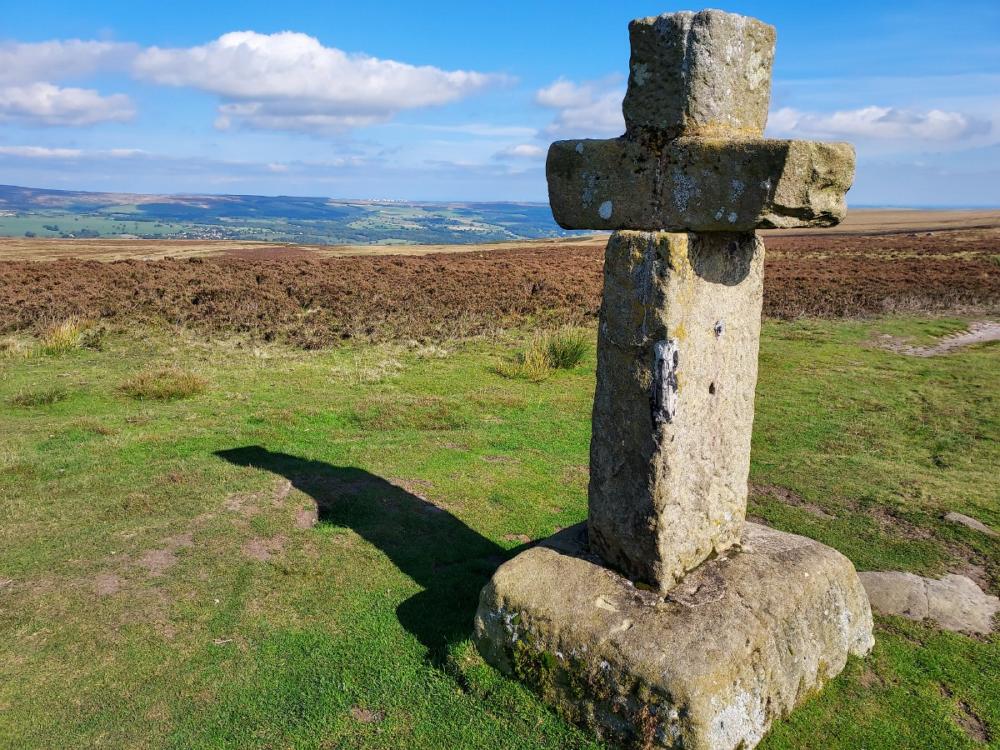 Cowper's Cross
Reaching the end of the pathway, close to TV masts and where a country road abruptly ends with a gate, turn right for a short distance to reach Cowper’s Cross. It was likely erected originally to try to stop local gatherings at the nearby cup and ring marked Badger Stone, which would have been a site for markets particularly at the time of the Spring Equinox.

Follow the path bearing west behind the cross which approaches another collection of large gritstone boulders: East Buck Stones and West Buck Stones. Just beyond these, you reach a distinctive corner, at the edge of the fenced plantation. Follow the path leaving to the right, alongside the plantation edge. When the path splits, keep right and you will curve north. At times, the path is unclear, a faint path leaves to the left after a boundary stone, follow this, passing a wall stile, to meet the Dales High Way and Millenium Way.

As with most moorland, the paths marked on the OS map don’t always correlate to what you’ll see before you; the open access land has numerous pathways trodden; and here a GPS tracker would come handy. For those like me who prefer a paper map, the broad objective is to head north/north-west and in time you will indeed reach the clearer Dales High Way/Millenium Way.

From here, you can bear left a short distance to reach Noon Stone, above Addingham Crag, before retracing your steps along the Dales High Way. You’ll come to the Swastika Stone, a carved gritstone outcrop overlooking Woodhouse Crag.

Continue ahead for approx. 400m, passing through a gate. Shortly afterwards, turn left along a path that isn’t immediately obvious. This comes to the top of Herber’s Ghyll: a fabulous woodland decent along a curving pathway, which crosses several footbridges over the Black Beck. This short section is a glorious contrast to the expanse of moorland above.

At the bottom, simply follow the residential streets back to the town centre. It’s worth leaving the moorland early to experience Herber’s Ghyll, however you can stay on the moorland and Dales High Way to bring you closer back to where you began, if you’d rather not walk the last stretch by road.
Also by Caroline Spalding...
Review: A Calling For Charlie Barnes – Joshua FerrisReview: Test Signal Edited By Nathan ConnollyReview: Burnt Sugar By Avni DoshiReview: Diamond Hill By Kit FanReview: Mermaid Singing By Charmian Clift
More in this series...
Northern Walks: Along The Black Brook From Stainland, CalderdaleNorland Moor, Barkisland And The Ryburn ValleyThe Border Moorland - North Of Denshaw From BuckstonesNorthern Walks: Discover Derbyshire’s Dark Peak – To Bleaklow HeadCats, Dogs & Robin Hood’s Bed Upon Rishworth MoorNorthern Walks: Mossley, Uppermill & Hartshead PikeNorthern Walks: Crows & Rhododendrons from Cragg Vale, CalderdaleBarley, Newchurch-In-Pendle And Pendle HillWest Nab & Wessenden Valley From Meltham, HuddersfieldWalk 11 - Bingley, St Ives Estate, Goitstock Wood, Hewenden Viaduct And CullingworthRipponden, Mill Bank And Cotton Stones - The Hidden Gems Of Calderdale To The Curious WalkerNorthern Walks: The Parish Of BradfieldNorthern Walks: Stoodley Pike And Crag ValeNorthern Walks: A Circuit Of Castle Hill