Now We Are Ten: Settle's Gallery On The Green Marks Its First Decade 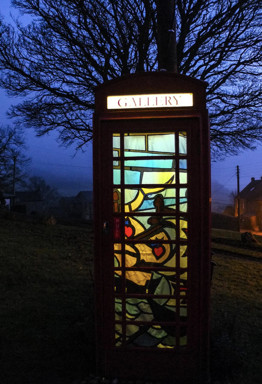 To mark the occasion the town’s Folly museum is staging a special exhibition telling the story of how a group of local art enthusiasts took over a former BT telephone box and turned it into what is claimed to be ‘probably the world’s smallest art gallery’.

The establishment of the gallery in the summer of 2009 hit the headlines and generated broadcast coverage both in this country and around the world. Surprisingly, the claim to be ‘probably the world’s smallest art gallery’ has never been challenged.

But what is also remarkable (and this is the subject of the Folly exhibition) is that the gallery has sustained for ten years. During that time it has attracted an eclectic mix of star names who have exhibited in prestigious galleries around the world, and has also offered an opportunity for local school students to display their work.

But whether they have previously exhibited in national galleries, or school art rooms, the challenge facing every artist has been the same: how to scale down their work to fit into the confines of a former telephone box. 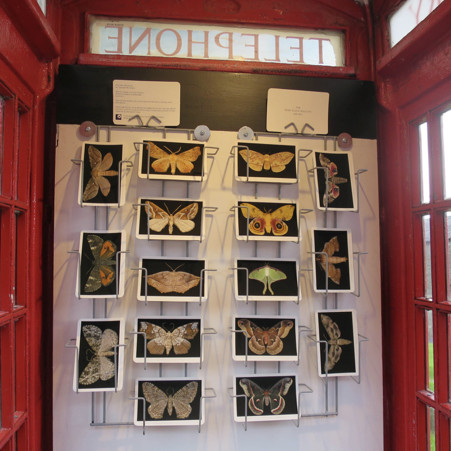 Jim des Rivières’ ‘Moths’
Photographers like Eamonn McCabe, Martin Parrand and Canadian moth photographer Jim des Rivières have perhaps found it easiest to reduce their work to postcard size. But others have adopted a more ingenious approach. In 2017, abstract artist Tom Palin created a ‘white cube’ around the inside of the booth, whilst a local knitting group crafted a pear tree to hold their all-knitted ‘12 days of Christmas’.

The tenth anniversary exhibition includes comments from many of the artists who have shown their work in the gallery. Multi-award-winning and world renowned photographer Eamonn McCabe, who was one of the first exhibitors, said “It was great fun being one of the first photographers to exhibit in the unique phone box gallery in Settle with my Writers' Room Series”.

Tessa Bunney, Pink Lady Food Photographer of the Year in 2014, loved the Gallery too: “When I was asked to exhibit my work from the Home Work series in the Gallery On The Green, I jumped at the chance as the ex-phone box gallery appealed to my love of the quirky and I also loved the idea of the public getting up close to the small images, being able to pick them up and look closely!”, she said. 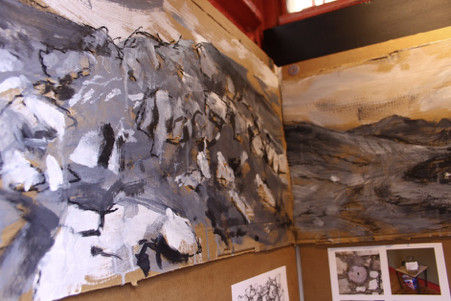 Phil Moody – ‘Interventions with Stone’
Deborah Boswell, who exhibited a locally themed exhibition in 2018, ‘Stories of Stone’, featuring social history around Ingleborough, commented “The Gallery on the Green was a perfect venue to show our mini collection of portraits depicting characters from the Ingleborough area. The size of this space provided a one-glance view of ‘A big hill in a small box’. This free local gallery, with its ever-changing exhibitions, delivers art to people’s doorsteps”.

Award-winning documentary photographer, Martin Parr, summed up the appeal of the Gallery: “I was delighted to show my mobile phone images in the phone box gallery. I am a great believer in photography's ability to go anywhere and to be both high and low at the same time”, he said.

Former Queen guitarist Brian May, who has exhibited his historic stereoscopic photography twice, much to the enjoyment of his many fans, has attracted attention as our most famous exhibitor. As well as exhibiting, he gave public lectures in Settle’s Victoria Hall – and one of the funniest interviews of all time to Bay Radio, from inside the phone box !

The tenth anniversary Gallery on the Green exhibitor is photographic artist Mary Woolf, who lives just yards from the gallery, and has recently been chosen to design the road side signs that welcome visitors to Craven District.

The Folly exhibition opens on July 11 and runs until September 6.

Mary Woolf’s exhibition at Gallery on the Green runs from 6 July to 6 September. For information on her work please visit https://www.marymwoolf.com/