On The Ridge In Good Company: October Beer Of The Month

Stephen Clements well remembers a life-changing moment one sunny Sunday afternoon in 2017. He was sitting in his garden in the Sefton Park area of Liverpool, sampling a consignment of beers. Out came Thicket, a Bramble Sour, which this passionate beer drinker immediately pronounced one of the best he had ever tasted. Immediately he had a fancy to work for the firm that produced it and three years later fulfilled that ambition when becoming Sales Operation Manager for the Leeds-based Ridgeside Brewery. 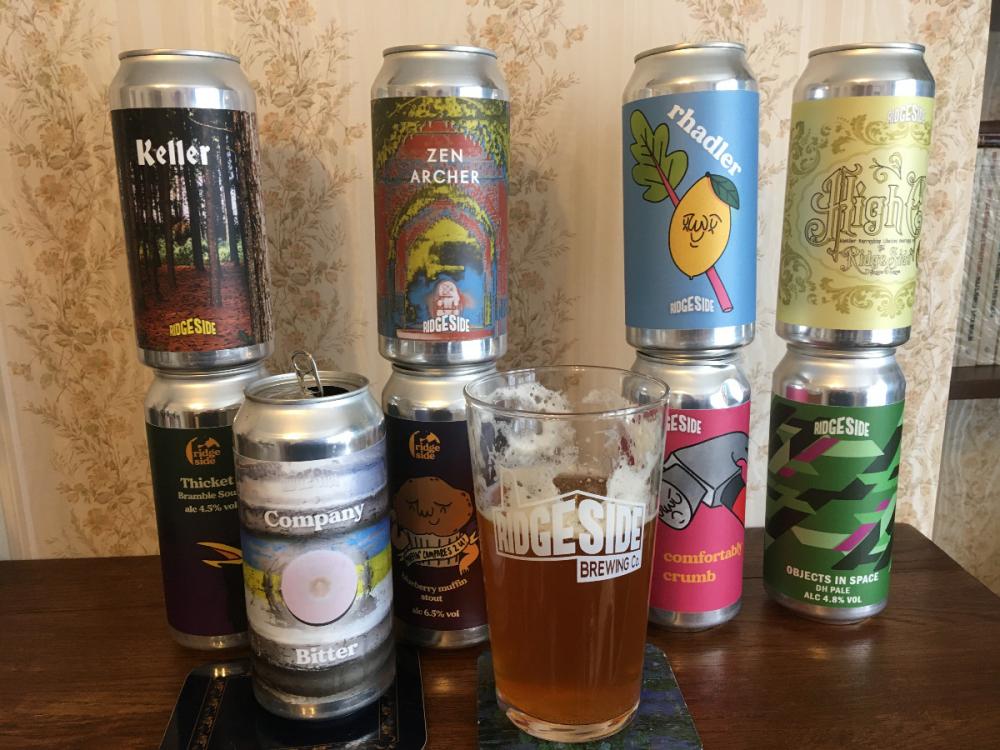 He had not been in post for very long before the Covid epidemic struck and he believes his background in Chemistry and Disease helped to give him perspective when overnight the firm had to shut down and temporarily lost a quantity of orders at home and abroad. ‘As a firm we are now more agile than before,’ he reflects, looking on the positive side, ‘after introducing a major canning scheme. The new canning machine produces small marginal gains, eliminating 2 or 3 per cent beer loss, producing better beer with less exposure to oxygen.’

Recently the firm has rebranded itself launching a new image, ‘respecting our heritage whilst embracing modern ideas’, to designs by local artists, Tom Connolly and Stephen Lovat.

‘We are never afraid to experiment or to introduce new styles of beers. We were the first brewery in the UK to introduce a Brut IPA, a Champagne-style beer, back in 2018.’ They have a core range of exciting beers which Stephen refers to as ‘fun, edgy and exciting whilst appealing to a wide variety of ages and tastes’. They include Objects in Space (4.8 ABV); a Dry-Hopped Pale; Hold Fast (4.0), a Session IPA; Equator (5.6), a Pineapple & Mango IPA; Company Bitter (4), a Yorkshire Bitter, and Nothing But the Rain (0.5), a Low-Alcohol Pale.

They have just added a rather special lager, Keller (5.1), a development by head brewer, Matt Lovatt, of a brew introduced in 2016 fermented with kveik yeast at over 35C., then lagered. It has a clean, subtly fruity blend of herbal noble hops perfectly balanced with layers of honeyed malt. ‘Matt is the brewing genius,’ says Stephen, ‘but several of us throw ideas into the mix.’


Also by Andrew Liddle...
Big Day Reality Captured In ScarboroughCurfew Threatens Pub ClosuresA Portrait Of Place – A Study In Glass By Gillies JonesAdele Howitt’s Hinterwater ProjectAn Oktoberfest In Name Only
Objects in Space is undoubtedly their most popular beer, described by their website as ‘Hazy, soft and saturated using a high dose of oats, wheat and chit malt with US and European hops such as Mosaic, Chinook, Ekuanot and Mandarina Bavaria to produce heady, stone fruit and berry aromas alongside tropical fruit pulp flavours all finished with a restrained bitterness’.

The brewery, an 8-barrel plant, is situated in Meanwood, Leeds, and takes its name from the historic Woodhouse Ridge, a protected area, a strip of mature woodland on hillside known locally as 'The Ridge'. There is an on-site webshop and a taproom which is currently closed because of the restrictions. Their beers are available in some fine local pubs, including three of the best, the Belgrave Music Hall and Canteen in the vibrant Northern Quarter, The Head of Steam on Park Row and Wapentake on Kirkgate. They export to France, Denmark, Holland and soon to South East Asia and America.

It was originally founded by Simon Bolderson, a legendary figure in local brewing circles, who sadly passed away in 2014. Once a well-known figure in the East of Arcadia at Meanwood or Seven Arts in Chapel Allerton, he had a passion for brewing and in his lifetime and beyond Ridgside beers have won countless CAMRA awards. Most recently, they picked up a silver award for their Core Stout, Milky Joe, at York CAMRA Beer & Cider Festival.

Today, they pick up another award. Their eminently smooth and inviting Company Bitter is the Yorkshire Times’ Beer of the Month of October.