Optimism: A Useful Trait: A Man Of Honour By Barbara Taylor Bradford

Like every good girl in the (very) late 70s, I read A Woman of Substance (first published in 1979), followed by the rest of the Emma Harte saga, as each novel came along. Books became dog-eared as they were passed around an eager reading circle. Unlike many of my friends, however, I did not watch the televised drama when it was first aired and, although my finger hovers over the button on the remote as I peruse the TV listings and see the reruns, I have not yet succumbed. I was delighted, however, to learn that a prequel to the original novel had been published and have been quick to read it.

This new novel by the most prolific of authors recounts how Blackie O’Neill, orphaned and alone, comes from Ireland to that great "metropolis", Leeds, to live with his aunt and uncle. At thirteen, handsome, well built and looking older than his years, he comes to work and learn, as an apprentice to his uncle, a builder. Blackie is kind and well-liked as well as ambitious, and has a thirst for knowledge of all sorts. His bright-eyed fervour is evident. He intends to build houses and is determined that one day he will be rich and throw off "the impotence of poverty".

He develops several friendships, one of which is with Emma Hart, a kitchen maid whom he meets by chance when he is lost one day on the Yorkshire Moors. They become lifelong friends. We learn more of Emma’s humble beginnings, too, and witness a little of the hardship and maltreatment of the working class at the hands of some of those who should have known better. We also witness her daring rescue of an elderly Jewish man being attacked on the streets of Leeds, which becomes a life-changing event for her. Both Emma and Blackie are equally driven, and as they embark on their life journeys, both are determined to move up in the world, to make something of themselves. Both are fiercely strong and independent characters, and both maintain an admirably positive attitude, no matter the obstacles put before them. They are destined for success since both are also well endowed with charm, and as Emma notes, "charm does it all the time". 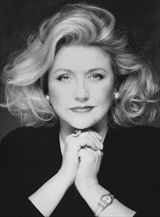 Barbara Taylor Bradford
The Irish lilt is clear in the writing; so, too, the Yorkshire tones, although the dialogue is at times a little stilted and repetitive. There is a clear sense of place, too, although some of the descriptions, of Leeds especially, could have been better fused into the narrative. The contrast between the wealthy upper classes and the impoverished workers is stark and fuels the ambitions shared by Blackie and Emma. Both meet kindness, however, and are helped on their way by appreciative and sympathetic people who recognise talent and an unmistakeable work ethic.

Food is important when you have known real hunger and wondered where your next meal will come from, and the homely cooking of Aunt Eileen, among others, is certainly appealing. Bradford brings to life both 1900s Ireland and England with her descriptions of fashion, interior design, meal preparation and the rest. The streets of Leeds are not paved with gold, but opportunity exists for those who are prepared to work for it – a good lesson for any contemporary reader.

The novel is character-driven; there is little real drama and the pace is somewhat pedestrian at times, but there is plenty of emotion, some romance and a few loose ends left, which perhaps Bradford intends to tie up in later novels about Blackie O’Neill. There were elements which could have been further embroidered, not least surrounding the Fairleys, and Blackie’s aunt and uncle seem to fade into obscurity as the young lad grows up. Lord Lassiter provides a link between England and Ireland, and is perhaps a standard against which to measure Blackie, himself.


Also by Artis-Ann ...
WHO Knew? - The Murder Mile By Lesley McEvoyChoices, We All Have Choices: Both Of You By Adele Parks‘From Small Things, Greatness’: A Single Thread By Tracy Chevalier"Coincidences Are As Rare As Unicorns" : A Song For The Dark Times By Ian Rankin‘The Heart Of Most Murders is …’ : The Heron’s Cry By Ann Cleeves
Although a prequel to A Woman of Substance, this novel may be read as standalone. It could never live up to the original Woman of Substance (or at least my memories of it) but it is certainly an enjoyable read, which kept me entertained to the end.


A Man of Honour is published by Harper Collins