Painting Over The Cracks: Trio By William Boyd 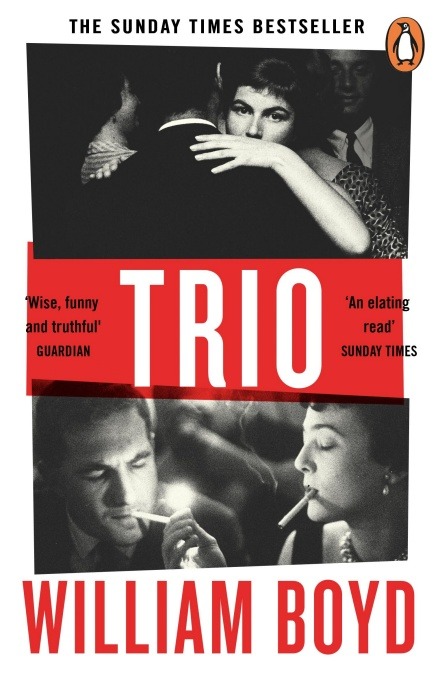 More forays to the book shops are required as the last of the Christmas reading is now finished! In this case, Trio by William Boyd. Very different from my normal choice of literature, it is hard to categorise, although one critic described it as “a perfect mix of frolicsome and melancholy”.

Trio follows the lives of three protagonists, through the summer of 1968. A thoughtful choice of year, given, some might say, that it was a watershed: riots in Paris, war in Vietnam, the assassination of Martin Luther King in Memphis and Robert F. Kennedy in Los Angeles - and the three characters to whom we are introduced are brought together on, of all places, a film set in Brighton.

Elfrida Wing is an alcoholic who gives new meaning to the phrase ‘adding Sarsons to orange juice’. She is a novelist, once termed the ‘new Virginia Woolf’, but she is plagued with writer’s block and has not put pen to paper for ten years. She has ideas but cannot follow through until at last, her publisher pulls the plug. Elfrida admits her marriage is a sham, knowing her husband, the philandering film director, is enjoying the charms of yet another woman. She believes that her existence as a functioning alcoholic is known only to herself - but she needs rescuing.

Anny Viklund is a young Swedish-American actress, in the starring role of Ladder to the Moon. Her older boyfriend, Jacques, a philosopher, is in France; her lover, Troy Blaze, (aka Nigel, whose parents live in Swindon) is with her on set and her terrorist ex-husband, Cornell, is not where she thinks he is. Plagued with insecurities, her lifeline – or not – lies in her tablets.

Talbot Kydd is the film’s producer. Challenged with numerous issues connected with the film, including a treacherous business partner, he also has his own secrets, not least, unbeknown to his wife, Naomi, a flat under the name of Eastman, with a gallery of beautiful photographs. Despite being married with two grown-up children, he is also coming to terms with his predilection for men -of which his wife might, or might not, be aware.


Also by Artis-Ann ...
Senoy, Sansenoy And Semangelof: When I Close My Eyes By Jemma WaynePerhaps, Perhaps, Perhaps: The Christie Affair By Nina De GramontKeep Digging: The Night She Disappeared by Lisa JewellScarred, Possibly Scared: Prague Spring By Simon MawerSaying One Thing, Thinking Another: The Undiscovered Deaths Of Grace McGill By C. S. Robertson
All three central characters feel their lives are unravelling, their demons and issues with identity, taking their toll. Where does the future lie? As the film production makes slow progress, the narrative focusses on each in turn, alternating between chapters, and the reader goes along for the ride, accompanying the characters on their journeys, meeting the colourful crowd with whom they mix. It is only at the end, however, when there is time to reflect, that you realise just how much of their lives you have shared. At times, there is humour, often wry - there are few belly-laughs – often sad, and certainly, thought-provoking. It is reserved, sophisticated wit.

It might be said that this is a book about the absurd business of film-making, the desperate business of writing a novel and the ludicrous business of acting. It is wise, funny and truthful on all three subjects, but more importantly, it is a character-led and character-rich novel. Boyd’s detailed sketches help the reader to quickly engage and sympathise with the combatants as they battle to discover – and reveal - their true identities. If I was a little unsure about this book at first, that was my fault. It is well written and multi-layered and I was a long way into it before I realised I was wholly engrossed and didn’t want to put it down. It is with good reason that Trio is a Sunday Times bestseller.


Trio is published by Penguin