Poem Of The Week: 'The Lion And Albert' By Marriott Edgar

The Lion and Albert

There's a famous seaside place called Blackpool,
That's noted for fresh air and fun,
And Mr and Mrs Ramsbottom
Went there with young Albert, their son.

A grand little lad was young Albert,
All dressed in his best; quite a swell
With a stick with an 'orse's 'ead 'andle,
The finest that Woolworth's could sell.

They didn't think much to the Ocean:
The waves, they was fiddlin' and small,
There was no wrecks and nobody drownded,
Fact, nothing to laugh at at all.

So, seeking for further amusement,
They paid and went into the Zoo,
Where they'd Lions and Tigers and Camels,
And old ale and sandwiches too.

There were one great big Lion called Wallace;
His nose were all covered with scars —
He lay in a somnolent posture,
With the side of his face on the bars.

Now Albert had heard about Lions,
How they was ferocious and wild —
To see Wallace lying so peaceful,
Well, it didn't seem right to the child.

So straightway the brave little feller,
Not showing a morsel of fear,
Took his stick with its 'orse's 'ead 'andle
And pushed it in Wallace's ear.

You could see that the Lion didn't like it,
For giving a kind of a roll,
He pulled Albert inside the cage with 'im,
And swallowed the little lad 'ole.

Then Pa, who had seen the occurrence,
And didn't know what to do next,
Said 'Mother! Yon Lion's 'et Albert',
And Mother said 'Well, I am vexed!'

Then Mr and Mrs Ramsbottom —
Quite rightly, when all's said and done —
Complained to the Animal Keeper,
That the Lion had eaten their son.

The keeper was quite nice about it;
He said 'What a nasty mishap.
Are you sure that it's your boy he's eaten?'
Pa said "Am I sure? There's his cap!'

The manager had to be sent for.
He came and he said 'What's to do?'
Pa said 'Yon Lion's 'et Albert,
'And 'im in his Sunday clothes, too.'

Then Mother said, 'Right's right, young feller;
I think it's a shame and a sin,
For a lion to go and eat Albert,
And after we've paid to come in.'

The manager wanted no trouble,
He took out his purse right away,
Saying 'How much to settle the matter?'
And Pa said "What do you usually pay?'

But Mother had turned a bit awkward
When she thought where her Albert had gone.
She said 'No! someone's got to be summonsed' —
So that was decided upon.

Then off they went to the P'lice Station,
In front of the Magistrate chap;
They told 'im what happened to Albert,
And proved it by showing his cap.

The Magistrate gave his opinion
That no one was really to blame
And he said that he hoped the Ramsbottoms
Would have further sons to their name.

At that Mother got proper blazing,
'And thank you, sir, kindly,' said she.
'What waste all our lives raising children
To feed ruddy Lions? Not me!' 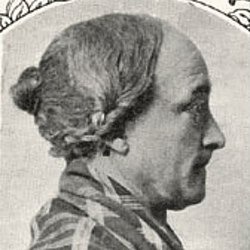 Marriott Edgar in Pantomime Dame costume
Please excuse this week’s unashamed elegy for a bygone age. Our Poem of the Week is a comic reminder of the working classes on holiday in a nineteen thirties of the imagination. The Blackpool to which millions flocked in northern Wakes’ Weeks, for sun, entertainments both on and beneath the pier, guest houses serving cabbage boiled to destruction, and lights out at 10.30, is the location for a comic masterpiece every bit as sardonically seductive as the laughing, rictus-faced mannequin in a glass case at the Pleasure Beach.

Kirkudbright-born Marriott Edgar’s jolly ballad was made famous by the actor Stanley Holloway in a brilliantly nuanced monologue, still recognised by many who weren’t born until long after its rendering. And it is hard to separate the two in a poem which was tailor-made for performance. Holloway’s astute elongation of vowels and drawing out of polysyllables to the point of parody is a joy to behold – listen to his enunciation of ‘somnolent posture’ and ‘The Magistrate gave his opinion’ and you will be reminded of a tradition of pastiche which began in the Music Hall and continued in more recent times in the work of Les Dawson and many others. Imitation of one’s social ‘betters’ – ‘Beaks’ of the bench, doctors, vicars – is realised in a kind of eloquent class-inversion, an echo, in turn, of the antic reversals of the ancient festivals of Saturnalia, of Dan Leno and of Falstaff. Put simply, it was the working class taking the piss out of those who obliged them into penury for the remaining fifty one weeks of the year.

Needing little elaboration, and saying a great deal more about the context in which it was conceived, the simple structure of Edgar’s narrative is secondary to that which it reveals about the working class at play, and about prevailing contemporary cultural mores. The ‘fun’ to which the teeming holidaymakers aspired was everywhere tinged with the macabre. The papers spread out over ruddy faces on the beach were, as George Orwell observed, filled with gruesome murder and mayhem, and titillation was the means of allure. The trapdoor through which the convict dropped in the pier head machine was activated by the pennies of kids greedy for a rehearsal, in the tiny, eerily backlit automaton, of the state’s mechanism of (in)justice. Under the seawall, an apoplectic Punch slugged the hell out of Judy as the dog hopped it with the sausages. And as late as 1969, the Chamber of Horrors in Madame Tussaud’s on the Golden Mile featured a horrific car crash as its central tableau. I could only bear to look through half-shut eyes. Fun…

Fitting, then, that Mr and Mrs Ramsbottom’s own desire for ‘fun’ might, in other circumstances, have consisted in shipwrecks and the flotsam of the ‘drownded’. They are the embodiment of Schadenfreude, and their realisation in jaunty rhyming quatrains is the essence of fun. The near psychopathy which accompanies the poem’s denouement is of a piece with Edgar’s brutal hilarity. That the Ramsbottoms are prepared to barter for compensation for their recently eaten son is a measure both of the poet’s instinct for comedy, and of the darker side of a Blackpool which was once the home of one Louisa May Merrifield. The exquisitely-named, thrice-married Mrs. Merrifield had a penchant for inebriation and poisoning, and in the end fell through her own trapdoor, operated by another Albert – this time Pierrepoint - at Strangeways on the 18th September, 1953.

The regurgitation of Albert by a dyspeptic Wallace in the next instalment of Marriott Edgar’s poem must greatly have ‘vexed’ his parents.