Queensbury Tunnel Could Become ‘Greenway’ Thanks To New Development Funding

£1 million announced to develop a business case for Queensbury Tunnel ‘greenway’ scheme.
Funding reaffirms commitments by Government to look for opportunities to level up connections between communities while boosting active travel
West Yorkshire Combined Authority will now work on presenting options for using the tunnel as a transport link 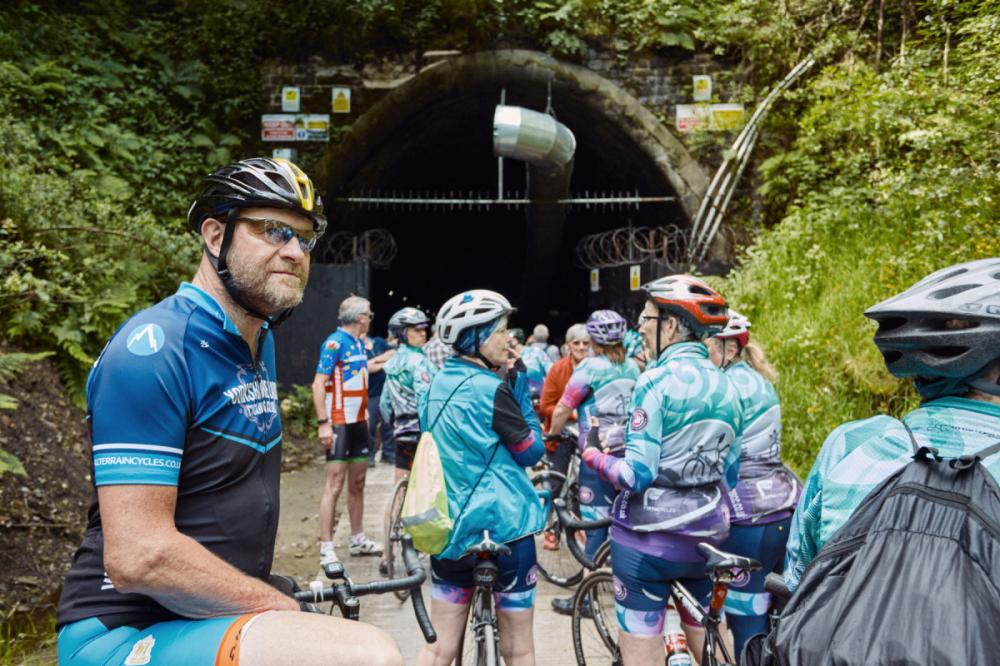 Cyclists at North Portal - credit Tom Woollard
The Queensbury Tunnel could soon form part of a new ‘greenway’ transport link connecting Halifax and Bradford, after the DfT today (Tuesday 14 July) announced funding for a business case on its redevelopment.

West Yorkshire Combined Authority will use £500,000 of the £1m pledged to develop options for how the tunnel could be part of a new green transport link between the historic Northern hubs of Bradford and Halifax, in a bid to boost connectivity while delivering economic and leisure benefits.

The funding is the latest example of Northern Powerhouse Minister Grant Shapps’ commitment to the Government’s twin aims of levelling up connections for areas of the country, particularly the North, who have felt left behind in recent decades, while also getting more people walking and cycling.

Northern Powerhouse Minister Grant Shapps said:
“The Queensbury Tunnel is part of our great railway heritage. Opened in 1878, it was closed in 1956 and has fallen into disrepair. So much so that last year the Victorian Society declared it one of its top ten most endangered structures. What a shame it would be to see it consigned to history when it could be reborn as part of a green transport route linking Bradford with Halifax, helping to improve connectivity in an environmentally friendly way while being a source of pleasure for generations of cyclists and walkers to come.

“Reviving transport infrastructure in the North is not just about flagship projects like HS2. It’s also about making improvements on a local scale that make a real difference to people’s lives . That’s why I’m so happy to confirm this funding which will enable us to see just how the Queensbury Tunnel - an iconic element of the region’s landscape - could be redeveloped as a green transport link.”

Highways England will receive the remaining £500,000 of the funding to look further at the engineering requirements and costs associated with making sure the tunnel is safe for any future construction.

The announcement follows the department’s recent £2bn pledge to boost active travel and get more people walking and cycling for shorter and more everyday journeys, such as to the shops or work.

In response to this afternoon’s press release from the Department for Transport, Norah McWilliam, leader of the Queensbury Tunnel Society, said:
“We’re obviously delighted that the Minister has once again recognised the considerable potential of Queensbury Tunnel as part of an active travel link between Bradford and Calderdale, and committed funding to demonstrate the viability of delivering it.

“It’s another important step towards a positive outcome for this historic piece of the region’s industrial heritage.

“The appetite for walking and cycling has been clearly shown by the thousands of people who’ve taken it up during lockdown. We have to build on that foundation by encouraging others to follow in their footsteps and tyre tracks. But that’s only going to happen if we provide safe, segregated, high-quality infrastructure for them to use.

“It’s time to move away from our engrained carbon-centric culture. Active travel must become the default choice for short journeys and we have to invest to make that happen.

“Queensbury Tunnel is a valuable future transport asset, not a relic of our past. It’s great to see the Government waking up to that reality.”