Saying One Thing, Thinking Another: The Undiscovered Deaths Of Grace McGill By C. S. Robertson 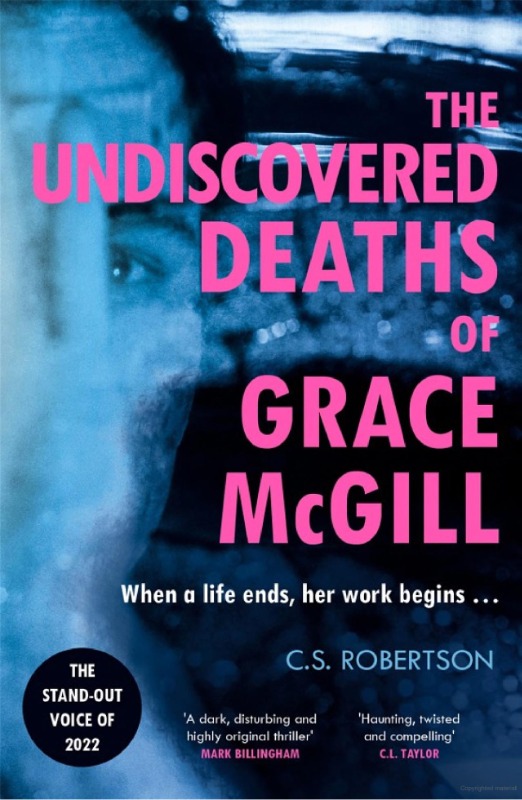 Do such jobs really exist? Bioremediation? I’ve never really thought about who cleans up when someone dies alone and undiscovered for days, weeks, even months, nor what the place might look like. In this novel, it is Grace McGill who has the thankless task, and brief but detailed descriptions of ‘the remains’ make clear the necessity of a job done well. The gases and fluids which collect will not be dispersed by opening a couple of windows, spraying a bit of furniture polish and flicking a duster.

Grace McGill runs the Last Wish Cleaning Company and for the last eight years has undertaken a task from which most people would surely shrink. She feels deeply about those poor lonely souls whom society seems to have forgotten, who lie in their bed or sit in their chair, long after they have shuffled off this mortal coil, because no one has seen fit to call – or care. The longest was a woman who was left for five years. Grace cares and thinks it is wrong, a crime even, that people should be forgotten in this way.

She is thorough and pays attention to detail as she cleans up, but she also sees beyond the clutter and sadness of a lonely death at the end of a lonely life, and looks for the story, often hidden in the dark secrets which await detection. The novel begins when she cleans the room of Thomas Agnew. She finds a tiny daisy, not the first she has come across but the police, who have little time or respect for her, are not interested in the similarity between two death beds – not at first, anyway.

Tommy Agnew plays on her mind; the stacks of newspapers she finds in his flat, the photograph of five young men on the mantlepiece; she is intrigued by the story they seem to be telling. She attends his funeral and is struck by the three mourners who are there. She carries out her own detective work and soon links Tommy and his friends to the disappearance of Valerie Moodie, decades earlier, in 1964. Grace is dogged in her pursuit of truth and justice but don’t be fooled into thinking this is just another amateur sleuth at work. This novel is dark and compelling with plenty of twists and turns, most of which are not predictable.


Also by Artis-Ann ...
Senoy, Sansenoy And Semangelof: When I Close My Eyes By Jemma WaynePerhaps, Perhaps, Perhaps: The Christie Affair By Nina De GramontKeep Digging: The Night She Disappeared by Lisa JewellScarred, Possibly Scared: Prague Spring By Simon MawerPainting Over The Cracks: Trio By William Boyd
Narrated by Grace herself, we are treated to the workings of an almost sinister mind, obsessed with truth. Her voice is naturalistic, the vocabulary not always that which is acceptable in polite society; her black humour and almost matter of fact commentary are in close juxtaposition. Robertson plays with the reader, giving us an insight into Grace’s mind, repeating the pattern of ‘I think’ followed closely by ‘I say’ – how many of us could lay claim to the same trait?

Grace is a loner, except for George, a stray cat she adopted – or who adopted her. In her mind, he is handsome so she named him after Clooney. Grace is awkward in company and admits to her OCD. Characterisation is strong in this novel. Grace’s appalling father leaps off the page, as you see him for the aggressive, selfish lowlife he is. There’s certainly no sympathy for him and even less as details of Grace’s past emerge. Some of the other characters she meets are equally menacing figures as they try to save themselves from a distinctly murky past. Grace, however, proves to be more than a match for them.

This novel is something a bit different: off-beat, slightly macabre, and not the usual psychological crime drama. A dark character-driven narrative, set in Glasgow and on the Isle of Bute. You don’t always anticipate the direction it takes as it veers this way and that, even exploring briefly the dark web, but the ending, if not predictable, is, on reflection, definitely fitting.