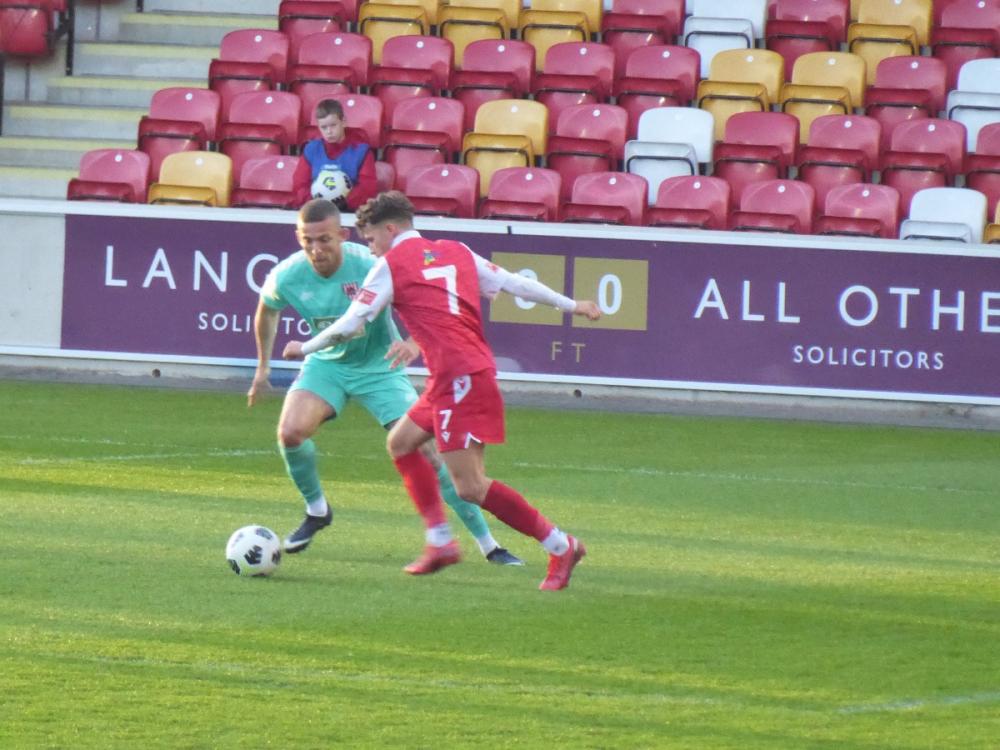 Top performer Brad Plant gave Scarborough the lead eight minutes into the second half, after getting onto the end of a rebound and slotting home.

Pacy winger Will Jarvis then doubled the advantage with 70 minutes on the clock, with a lovely finish into the top corner, before the title was confirmed in the 91st minute, when Ryan Watson struck a perfect first time driven shot past the 'keeper.


Scarborough began the better of the finalists, as Brad Plant acted as the driving force, showing off some fantastic skills on the wing in the opening five minutes, before creating the first chance of the game - Plant played in a pacy Luca Colville who did get himself in on goal, but failed to get the better of Guisborough’s Robert Dean, the ‘keeper smothering it and clearing up the danger.

It was a short while before The Seadogs almost broke the deadlock again, with a red shirt striking just wide of goal, before captain Will Thornton called the ‘keeper into action with a dodgy header.

Guisborough had their first opportunity 26 minutes in, when Ben Jackson broke down the left and tried a shot from an acute angle, but had it deflected out for a corner.

Plant was back on the scene again for Boro as he tested Dean from a dangerous position, but the ‘keeper managed to palm it back out, then the ball was down the other end, The Priorymen's Jackson cut inside and saw his shot also deflected over the crossbar.

The best chance of the first half came just after the half hour mark, and former-York man Will Jarvis tried a powerful driven effort, which everyone thought was going in, but instead came back out off the post.

Moments later, Joe Bartliff was denied by ‘keeper Ryan Whitley, the Guisborough man only just prodding it straight at his opposing ‘keeper, but not able to open the scoring.

Eight minutes into the second half, Scarborough defender Ashley Jackson sent in a cross-shot which almost troubled the ‘keeper as he managed to keep it out, but his acrobatic save only fell as far as Brad Plant, who slotted home to an almighty roar from the travelling Seadogs fans.

Following what must have been an inspirational half time team talk from Jono Greening, his Boro side retained most of the possession throughout the second half and Plant almost doubled the lead, and his tally on 66 minutes, after doing excellently to keep the ball in play before cutting back inside and curling a hopeful shot over the bar from close range.

However, it wasn’t long before Scarborough did get their second; and it was Will Jarvis who did so. Kieran Glynn found himself just about through on goal with 20 minutes to play, and unselfishly squared it to Jarvis, who worked his magic, taking it past two defenders then putting it into the top right corner.

The Seadogs winger could have had his second just seconds after the restart - he cleverly burst away from his man, and darted down the wing, before advancing into the box, where the end product was all that was missing, Jarvis’ tame shot being palmed away by the ‘keeper.

The North Riding Senior Cup title was set to be heading to Scarborough in the first minute of injury time, when the final was sealed. A tackle from a Guisborough defender fell kindly to Ryan Watson who struck it first time past the ‘keeper for a neat finish, putting the ‘visitors’ 3-0 up.

Then it was confirmed, with the referee blowing for full time and confirming Scarborough's emphatic victory, before the all-important trophy lift.