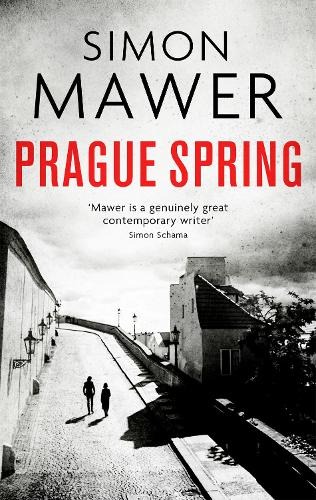 The irony is not lost on me that this book came to the top of the lingering bedside pile this week, given the current political climate. Set in Prague in 1968, the politics in that area of Europe both then and now is not for the faint hearted.

I have read a couple of Simon Mawer’s books previously and like his style; not prone to exaggeration or hyperbole, he incorporates historical accuracy and political insight, yet is also touching and emotive.

Prague Spring follows the journeys of two couples. James and Ellie are students at Oxford University who set off hitchhiking together for the summer. They don’t know each other particularly well but were thrown together when their original plans for the long vacation went awry. As their adventure takes them further from English soil, they decide to choose their route by the toss of a coin and find themselves en route to Prague to hear the famous cellist Birgit Eckstein, rather than to the safe, summer sunshine of Italy or Greece. Ellie at least is convinced that “Dubček's ‘socialism with a human face’ is smiling on the world”.

Sam is First Secretary at the British Embassy in Prague. His sometime girlfriend, Steffie, has been posted elsewhere and since theirs was not a committed relationship anyway, Sam finds himself enjoying the allure of a young student, Lenka, a Czech dissident. It is an unusual partnership especially when, on one occasion, Lenka proves herself capable of being "most undiplomatic".

Mawer creates a believable and diverse cast of characters in whom the reader invests. The two developing relationships are hesitant at first, as each tries to learn more about the other and in doing so, learns something more of him or herself. As for the other minor players, Eckstein is a gentle woman, a musician who perhaps has a greater understanding and insight than she expresses openly. The reader has sympathy for Egorkin at first but his whining and complaining begin to irk, while sympathy for his young partner grows. The Americans are loud and confident and the British Embassy officials also adhere to the stereotype with their stiff upper lips. Although minor characters in the scheme of things, they are credible, and are necessary to move the narrative forward.

Sam takes Lenka to Munich for a night. He is on diplomatic business and they are barely stopped at the border as they cross to and fro. Lenka feels tension which Sam can waive away without concern. He takes her shopping and the scene begs the question of fairness: why should one country have so much when their neighbour has so little? And, more philosophically perhaps, whose is the richer life? The West worships ‘things’ while the East values those things you cannot buy. Is it a moot point anyway, since there is nothing in the shops on the Eastern side of the Iron Curtain, to wonder at and yearn for?


Also by Artis-Ann ...
Senoy, Sansenoy And Semangelof: When I Close My Eyes By Jemma WaynePerhaps, Perhaps, Perhaps: The Christie Affair By Nina De GramontKeep Digging: The Night She Disappeared by Lisa JewellSaying One Thing, Thinking Another: The Undiscovered Deaths Of Grace McGill By C. S. RobertsonPainting Over The Cracks: Trio By William Boyd
Mawer explores the political divide. Having set the novel in a turbulent 1968, how could he not? The Soviet leader, Brezhnev, is making demands of Dubček, and wants to suppress his reforms; the Red Army is amassed on the borders, poised for invasion. There are four fragile lives caught up in the looming disaster as the political war machine rumbles forward and the Czechoslovak leadership (and the people) find themselves “walking a knife edge” on a “borderline between the living and the dead”.

The novel meanders along, alternating easily between the two couples. There are cameos not to be missed, not least the sensual description of Eckstein’s cello recital where truly “it is the totality that matters, not the fragments”. The contrast between that evening and the previous, spent at an Ides of March concert is marked. Eventually, the two couples coincide. It is then that the drama increases a notch or two and the tension rises. Fear and flight, political ideals and pragmatism take centre stage.

Mawer uses his historical knowledge to create a tense and touching novel, occasionally breaking off to give the reader a little useful context. He seamlessly mixes real and fictional characters and events to maintain the integrity of the novel, creating a convincing scenario in the process. There is no finality to this novel, no destination reached. There are questions left unanswered but that may simply be a metaphor for life – especially in politics. The King is dead, long live the King.


Prague Spring is published by Abacus