Separate Paths Sometimes Coincide: Someone I used to Know By Paige Toon 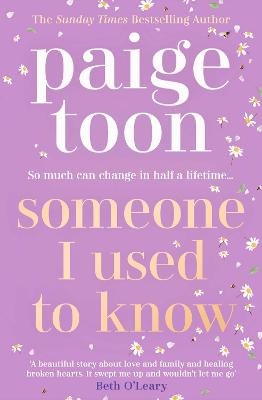 Long Lost Families eat your heart out. I love the programme and will happily admit to nursing the box of tissues when I settle down to watch it. Well, this novel is thought-provoking, heartwarming and heartfelt. It explores the ties which bind people and the miscommunication which can rip them apart. It also offers a view of people who most need our understanding but are sometimes ignored or worse, face prejudice, for something that is not their fault. The value of walking in someone else’s shoes cannot be underplayed.

The Prologue is ‘neither then nor now… but sometime in between’. It’s Christmas and Carrie and Ivan are celebrating their joint birthdays and retirement. Daughter Leah has come to join them with her baby daughter, Emilie, and husband, Theo. So, too, have many others with good reason to be grateful to Carrie and Ivan: along with friends and neighbours, there are many of the ‘children’ they have fostered over the years. A family Leah has got used to even if, during her teenage years, she sometimes experienced a hefty dose of resentment. The tragic events of 'that night', however, are not explained until much later in the novel when an unexpected twist is introduced and assumptions are overturned. I did not see it coming! 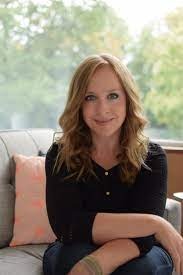 Paige Toon
The chapters alternate between ‘Then’ and ‘Now’ as the dramas play out between the principal characters. At fifteen, Leah’s life is closely intertwined with George, a troubled boy, forced into separation from his younger sister, Sophie, when he is fostered by Carrie and Ivan, and Theo, the local ‘rich kid’ whose life is far from rosy. Their lives collide one summer but events are brought to an abrupt end with the departure of both boys on the same day. Where these three were and where they are now is what drives the plot. Broken hearts can be mended but this is not just some sugary tale of boy meets girl dancing off into the sunset. It is touching and compassionate.

Jamie ‘hurtled’ into their family life at thirteen and never left. He provides something of a stabilising effect in the narrative and plenty of other secondary characters are introduced and given roles which help to fabricate a reality – if you’ll excuse the oxymoron.

Alongside the main narrative, there is a thoughtful exploration into the valuable role played by foster parents. There is no meaningful financial incentive (despite the caustic comments from some of the more cynical neighbours), but Carrie, especially, speaks passionately and eloquently about her role and it is clear that the gains are far greater than any pecuniary reward. Toon is clear that the job is not always plain sailing, that there are highs and lows, but with commitment, love and understanding, almost all obstacles can be overcome.


Also by Artis-Ann ...
Review: The Temptation Of Gracie By Santa Montefiore‘The Oak Tree Lives Inside the Acorn’: The Invention of Wings By Sue Monk KiddReview: Fatal Solution By Leslie Scase‘The Grit In All Of Us. Every Writer’s Ideal Material’: Red Sky At Noon By Simon Sebag MontefioreReview: Not For All The Tea In China By Chris Burrows
The fact that the story is based on an alpaca farm in Yorkshire adds an unusual twist which Toon uses to good effect to create a peaceful and stable environment for troubled children. So too, the references to the immediate area in which it is set: Harrogate, Killinghall, Brimham Rocks and the market at Masham are all real and root the plot somehow, in reality.

Toon is an accomplished author who can merge pathos with comedy, frustration and outrage with tender romance. She is the Sunday Times bestselling author of fifteen novels. This is the first I have read and I will be happy if it is not the last.

Someone I used to Know is published by Simon and Schuster