St Hilda, Pilot Of The Pier

Have you ever been on the pier at Whitby and watched in fascination the pilot boat busily plying in and out? She’s one of the great sights around the harbour, much loved and photographed. 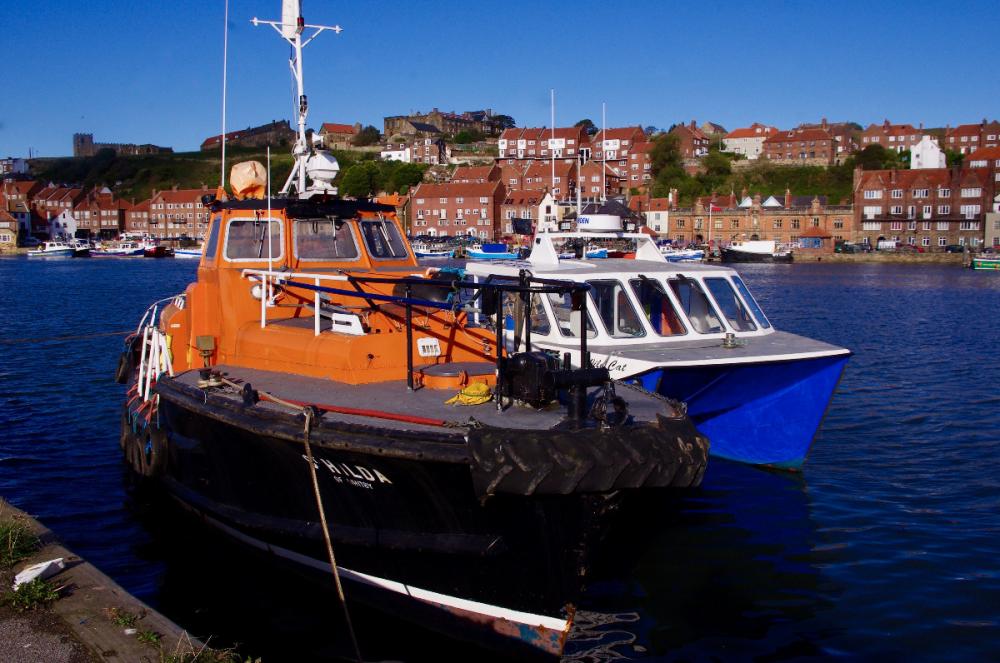 Pilot Boat "St Hilda of Whitby". Photo by David Merrett on Flickr
She’s called St. Hilda and she’s a former lifeboat. You can’t fail to have noticed her because her predominant colour is a bright orange and she makes her brief journey many times a day, chiefly in a window two hours on either side of high water when the swing bridge can be opened to admit vessels to the harbour. Only in exceptional circumstances is it opened at other times.

The Waveney Class vessel, based at the local council’s mooring on the Trident Pontoon, belongs to the first class of lifeboats operated by the RNLI capable of operating at speeds in excess of 10 knots (12 mph). There were originally 22 in operational service between 1964 and 1999 around the coast of the United Kingdom and Ireland. Faster boats came into service in the 1990s and many, of the Waverley class, like St Hilda, were sold for other use. Lifeboat services abroad, notably in Australia and New Zealand, took many of them.

Now, St Hilda’s trips are generally no more than two miles out, which is the limit of Whitby’s responsibility, dating back to an ancient Harbours’ Act. On occasions she will sail down to Scarborough or Filey, both of which come under the same maritime authority.

So what precisely is her job? Any vessels, among the fishing fleets, leisure craft and survey ships, longer than 37 metres have to be escorted into port. With so much coastal trade having transferred to lorries, she’s a little less busy than formerly and for a time this year she was seen less frequently because of Covid. During the early stages of the lockdown the leisure crafts ceased to sail and for a while little fishing went on. After four or five weeks, however, most of the forty-strong local fishing fleet went back to sea once it was clear their catch could be sold directly to the public in the harbour in the absence of lorries to take it to inland markets.

Absent too have been the colourful ‘nomadic’ fleets, those whose home ports are elsewhere, often in Scotland, and who follow the shoals of fish which move as the sea’s temperatures change. For a time, it was eerily quiet in the harbour and there was, remarkably, a complete absence of litter. However, it’s been a tourist boom time since lockdown was lifted and the crowds are still coming even in the middle of September.

Things promise to get even busier in a few years’ time when work begins on Europe’s largest wind farm at Dogger Bank, forty miles to the north-east. Whitby is the closest port to it and it seems highly likely all the crew changes will come through here and Scarborough as will the stores and equipment.

It looks like the former lifeboat is going to be even more briskly and efficiently about her escort duties, presiding over the harbour above which stands guard the monastery that the original St Hilda founded.