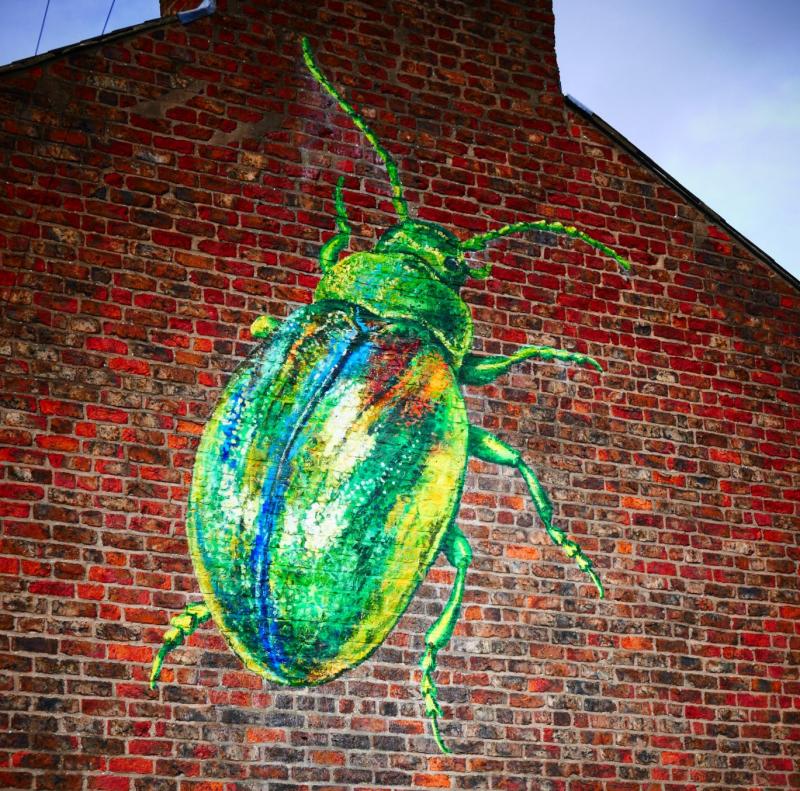 A Tansy Beetle painted on a York house by ATM
Street artist ATM is responsible for some of the most gorgeous and meaningful street art in the UK, creating large-scale images of species in decline. His newest piece is a massive mural on York’s Queen’s Street depicting a tansy beetle, an iridescent beetle almost exclusively found in York. It has been commissioned by New Networks for Nature, an interdisciplinary alliance supporting conservation, in advance of their three-day symposium in York in late October. I sat down with him to talk about snipes, street art, and saving nature.

I first meet him finishing off a ghostly white outline of the tansy beetle on Queen’s Street, a far cry from the luminous finished piece. There is a reason why some people call tansy beetles ‘the Jewel of York’: these little beetles are a gorgeous shining green, with iridescent tinges of blue and orange. In the UK, they are found almost exclusively along the banks of the River Ouse, in an area of only 30 kilometres; they live amongst the bright yellow petals of tansy plants, a home at risk from invasive Himalayan Balsam and habitat loss. Both ATM and New Networks are keen on its potential as a symbol of York, particularly as the city has so little street art (aside from the massive, and massively famous, Bile Beans mural). As a street artist, the rare negative comments ATM gets are mostly from older people: an ‘anti-youth’ sentiment, as he puts it. In contrast, other young street artists are remarkably respectful: “There was a chaffinch I painted in Brixton- it’s got tags all around it, but none on the bird itself”. 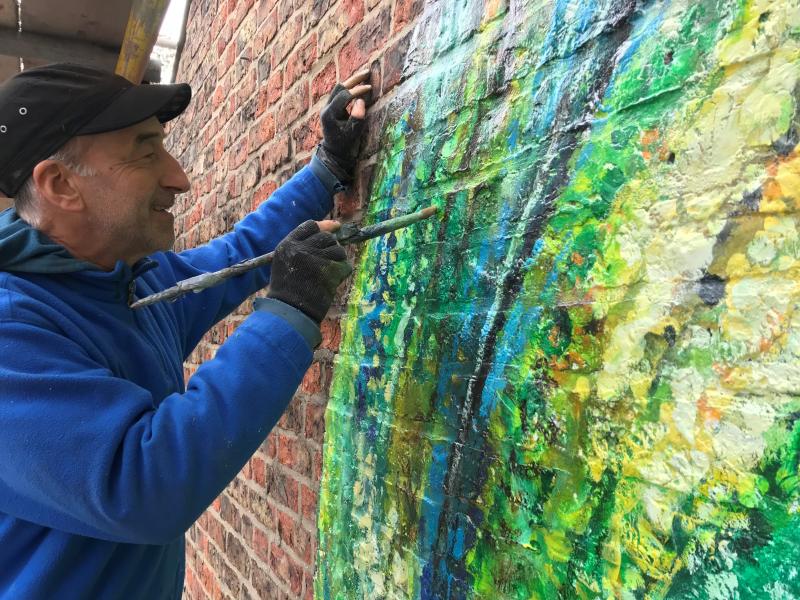 ATM painting the beetle
In his wildlife-based street art, ATM started by painting the mostly lost wildlife of Acton, his home; his first mural was a snipe in South Acton Estate, which would have once thrived in the area. There is a sense of the layers of time: a bird appearing on the very bricks that were paved over the grasslands which it would have once called home. He talks about the “ghost rivers” of London, rivers built over with stone, once flocked with snipe and other waterfowl, but still flowing, secretly; like Bollo Brook, which flows under Bollo Bridge into Acton. ATM’s art intends to bring such creatures back above ground.

Yet, in the case of the tansy beetle, as with a green-eyed flower bee mural in Hastings, it isn’t always about looking below, but looking closer. In other cases, it’s about taking a fresh look at the nature we tend to view as mundane: the common pigeon’s shimmering purple neck, the trilling melody of the blackbird. “We need to see things without having their rarity in mind” he says, describing the noise of sparrows as “little pockets of comfort”.

Above all else, he wants people to appreciate wildlife for what it is: there are no labels on his murals, just as there are no name-tags in nature. “It’s not about being utilitarian” he says, decrying trends in conservation that encourage thinking about animals only in terms of how useful they are to humans. Instead, his work encourages us to wonder wordlessly at the surprising presence of a massive chaffinch or kingfisher tucked in amongst concrete and brick. It tells us that we should just stop and look: at a blue jay, or a barn owl -- even a tiny beetle tucked under a tansy leaf.

This article was written by Gabriela Mancey-Jones.