The Cutlers’ For Chantry

The Cutlers’ Arms in Rotherham dates originally from 1825, but was rebuilt, with a magnificent glazed ceramic facade for Stones Brewery of Sheffield, in 1907, as part of a general rebuilding in Westgate.

Scandalously, it was faced with demolition in the early 2000s but was saved following statutory Grade 2 listing in 2004. After a period of closure, it was newly restored to its original Edwardian splendour by Chantry Brewery, in February 2014. It is one of the brewery’s stable of pubs of real character and history. Where better to try out their excellent beers brewed a stone’s throw away and which local councillor Michael Sylvester described as ‘tasting like angels dancing on your tongue.’

A gem of a place, it retains art nouveau windows, tiling and an original curved bar with original fittings and an elegant dividing screen. Local craftsmen were employed on the restoration. Not for nothing does it feature in CAMRA's National Inventory of Historic Pub Interiors. The exterior is equally impressive, so finely representative of the Edwardian Baroque style of pubs, simplified and uncluttered from earlier Victorian designs, and deserves describing lovingly and in detail. 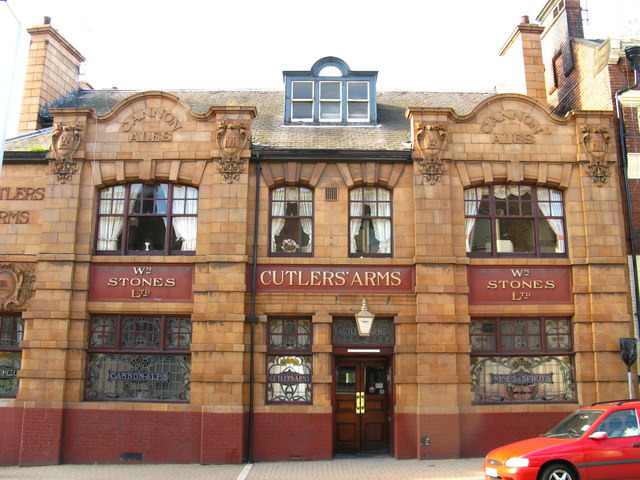 The facade view of The Cutlers' Arms on Westgate. Photo © Copyright Bobby Clegg
Its finest feature, perhaps, consists of two elegant bays decorated with red tile panels that match in colour the building’s brick skirting. The name Wm Stones Ltd, once one of Sheffield’s big four breweries, including Ward’s Sheaf Brewery and the Whitbread and Hope breweries, is picked out in gold lettering. Between the bays over the door is the name of the pub, in the same style of lettering. There are four projecting pilasters, which form pairs round the bays, each topped with relief armorial carvings including a Cannon motif and the date 1907.

At the top of the building embossed on rounded mock gables, above each the bay, we read CANNON ALES in raised lettering, again identifying the name of Stones’ brewery and the building’s date. The upstairs windows are nicely rounded in harmony with the ‘gables’, with nicely tapered wedge-shaped keystones standing proud. All the stained glass is green foliage and yellow flowers in Art Nouveau style, with central panels reminding us of Cannon Ales, the brewer’s name and Wines & Spirits, in white on red.


Also by Andrew Liddle...
The Lonely Chapatti’s Food For ThoughtThe Nomadic Life At ChristmasTerriers Get The Magic Rock For ChristmasLaughter In The Dark In Leeds - From The Devil’s JukeboxFalsgrave Park, The Town Crier And An Upturned Santa
There’s nowhere better to get the full range of Chantry beers on tap, their Diamond Black Stout, the Iron and Steel Bitter, New York Pale, Special Reserve and Steelos. They usually also have on a couple of guest ales and two real ciders. I can’t remember finding Leffe Blonde on draught anywhere outside of Belgium before.

Adelle, wife of the brewer’s owner, Mick Warburton, speaks of the passion she shares with her husband for real ale pubs. ‘We love proper pubs with history where anybody can come in to drink beer and feel part of a community.’ Because she handles the social media events for all the brewery’s pub, she has her finger on the pulse of what drinkers want. ‘In Cutlers’ we have a very wide range of customers of different age groups,’ she explains. ‘We have three main audiences: those who like our live Friday and Saturday music events, the football crowd on match days and, all the week round, the real ale drinkers. They all get on great together and are part of our really warm and friendly atmosphere.’

I know of another Chantry pub in Westgate, The New York Tavern, built in 1856, until fairly recently called Prince of Wales Feathers. I used to go in it incognito on match days when my team, Bradford City, was playing Rotherham at Millmoor. Mick tells me with some pride about a recent addition. ‘The Chantry Inn, in Handsworth, Sheffield is a stunning pub we bought last February and opened in May after a renovation. It is supposed to be one of only 3 in a graveyard and, in fact, the only one fully in a graveyard. The church was built in 1150 and our pub was originally the Chantry House built in 1250. It was sold in 1799 and then shortly after turned pub from called Cross Keys. We have the original deeds also to this sale. It has 2 real fires and 3 separate rooms. One of the rooms still has the service bells at the back of the seats - not often seen in any pubs today.’

As a footnote, you might think Cutlers’ Arms is a close cousin of the glorious Elephant and Castle, another grade 2 listed building in another Westgate - Wakefield - built at a similar time and still bearing the name of Warwick & Co’s Anchor Brewery, of Boroughbridge, which in 1925 was acquired by John Smith’s along with its 42 public houses.

A review of Chantry’s outstanding ales will feature in this column soon.