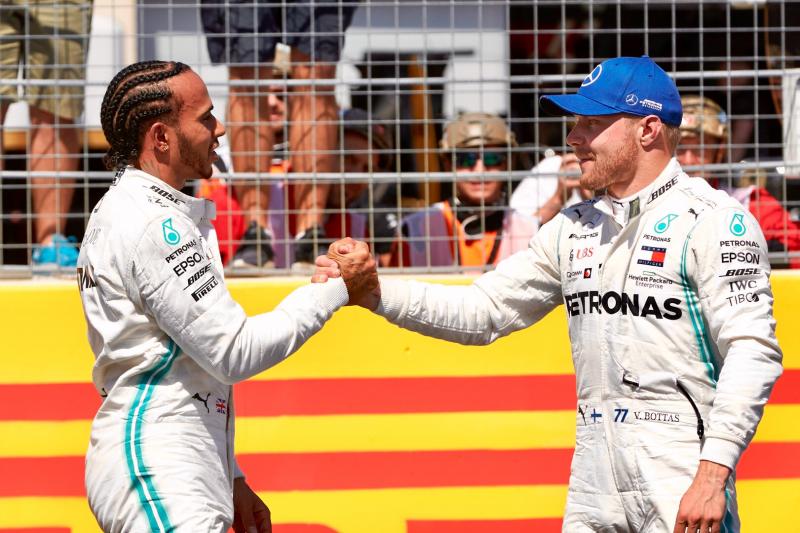 Mercedes’ Lewis Hamilton and Valtteri Bottas again dominated proceedings
With the arguments rumbling on about Sebastian Vettel’s highly controversial penalty in Canada which had gifted the victory to his main rival Lewis Hamilton, the Formula 1 circus reassembled at Le Castellet’s Circuit Paul Ricard down near the Mediterranean for the French Grand Prix, but any hopes for an exciting race were dashed by Mercedes’ dominance from first practice right through to the chequered flag.

In Friday’s opening practice session it had proved to be business as usual for Mercedes, with Hamilton topping the timesheets just ahead of his Finnish team-mate Valtteri Bottas. Ferrari spent much of the period trialling new parts, but Charles Leclerc ended up as the best of the rest, with fifth fastest Vettel sandwiched by the Red Bulls of Max Verstappen and Pierre Gasly. 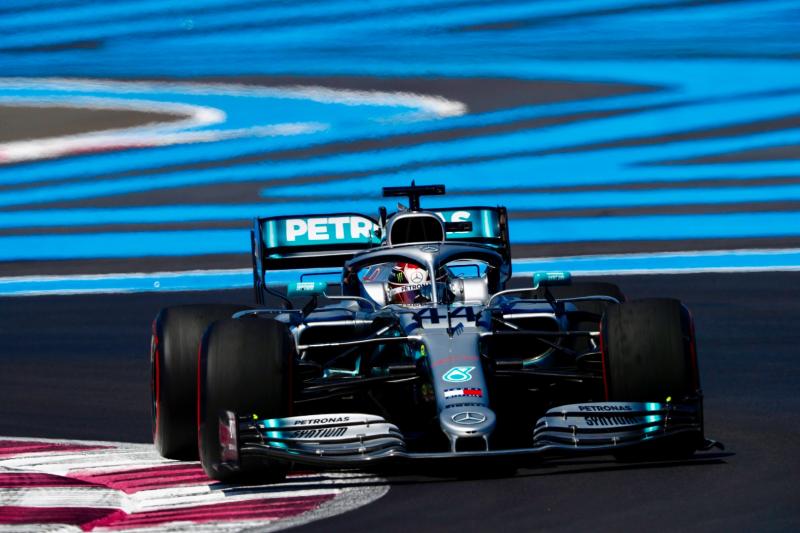 Hamilton cruised to an easy victory at the multi-coloured Paul Ricard circuit
At 2.15 local time on Friday afternoon, before the start of the second practice session, the Ferrari team met with the stewards who had been on duty in Montreal to discuss their wish for Vettel’s Canadian penalty to be reviewed in the light of what they believed to be “overwhelming” new evidence about how their driver rejoined the circuit in front of Hamilton after losing control.

However, the stewards were not impressed and rejected Ferrari’s request, leaving team principal Mattia Binotto to respond by saying he was “disappointed for his team, the fans and the sport as a whole”.

Then, by uncanny coincidence, part way through the subsequent free practice session Hamilton lost control of his car at Turn 3 and rejoined the track right in front of Verstappen, who was forced to run wide. This earned the reigning world champion a visit to the French stewards, who in contrast decided not to penalise him. 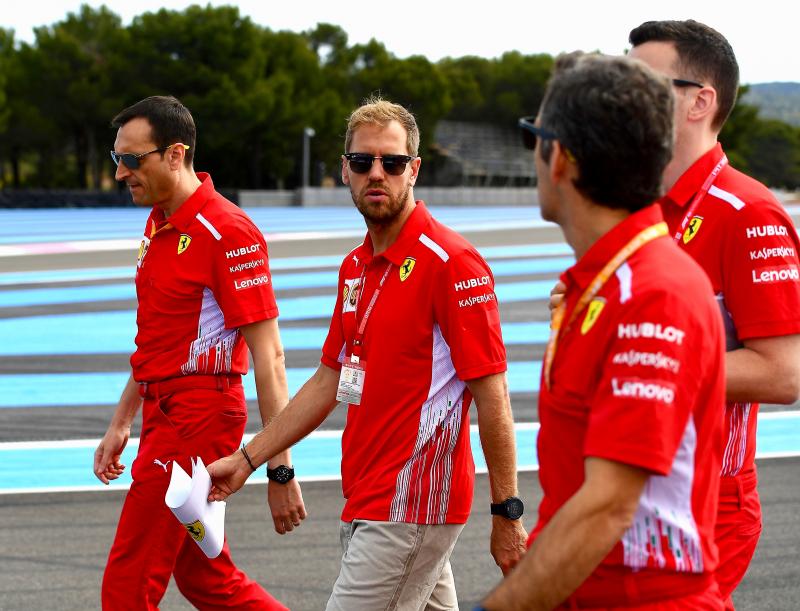 Ferrari’s Sebastian Vettel (centre) may have just married his longtime partner, but he had a difficult weekend in France
Second practice ended up being another Mercedes 1-2, with Bottas this time outpacing his colleague, followed by the Ferraris of Leclerc and Vettel and with an impressive fifth quickest time set by McLaren’s 19 year old British rookie Lando Norris.

In Saturday’s final practice period before qualifying it proved to be a case of two by two for F1’s top three teams as the Mercedes duo headed the Ferraris and the Red Bulls, with Bottas again fastest.

Qualifying had a predictable outcome with the two silver Mercedes cars again beyond the reach of everyone else and the team claiming its 63rd front row lockout. The Monegasque Leclerc, at what is almost a home circuit for him, was delighted to qualify his Ferrari in third position, behind Hamilton and Bottas but just ahead of Verstappen’s Red Bull. 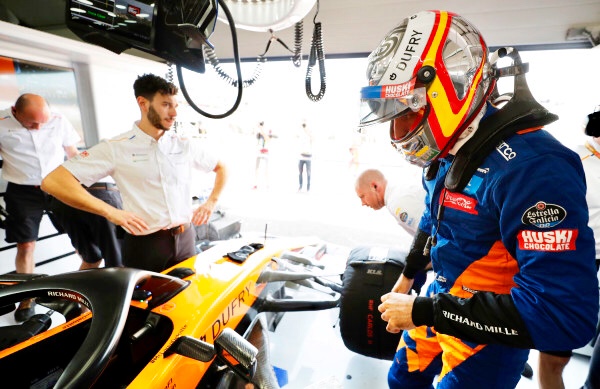 McLaren’s Carlos Sainz gets ready for action on his way to an excellent sixth place finish
McLaren was the most excited team on the pitwall though as their pairing of Norris and Carlos Sainz helped themselves to the third row on the grid for the following day’s Grand Prix after outpacing seventh placed Vettel. The Canadian penalty review denial seemed to be playing on the mind of the German multiple champion as he joked about retiring and, despite having become newly married to his longtime partner and childhood sweetheart, his honeymoon certainly didn’t extend to the qualifying hour!

Come race day the sun shone with a zero percent chance of rain and after a clean start the leading quartet were as in grid order, with Hamilton heading Bottas, Leclerc and Verstappen and so, allowing for temporary changes caused by the timing of pit stops, it was to remain to the chequered flag. 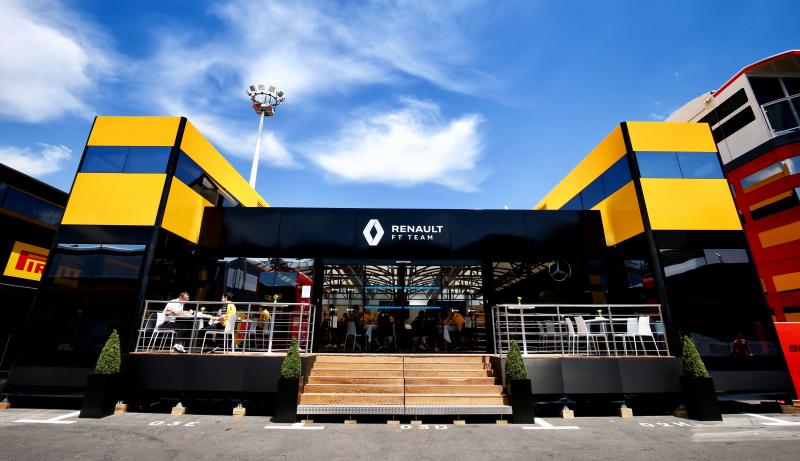 French car manufacturer and F1 team Renault introduced its new motorhome at its home Grand Prix
Sainz got the better of his McLaren team-mate Norris on the opening lap to move up to fifth position, but Vettel overtook Norris and then the Spaniard into the Chicane on laps five and seven respectively before holding fifth place to the close.

As the race progressed, all the leading drivers made their pit stops to change from medium to hard compound tyres which would last to the end of the Grand Prix and Hamilton established an ever increasing lead over Bottas, who was equally unpressured.


Also by Graham Read...
Flawless Russell Makes It Two Wins In A RowSainz To Ferrari, Ricciardo To Mclaren And Vettel’s FutureVettel To Leave Ferrari At Season EndRussell Holds Off Leclerc To Reign In Spain﻿Albon On Top After An Epic Battle With Leclerc
By lap 44 fifth placed Vettel had a massive 50 second lead over the driver behind him, Sainz, and so had the luxury of being able to make a second pit stop without risking his position, to switch to the stickiest soft specification tyres and attempt to claim the extra point for the fastest lap of the race. He headed to the pits on the penultimate tour and duly took the extra point on the final lap.

There had been a very brief Virtual Safety Car period on lap 50 to enable the recovery from the circuit of a stray plastic bollard and, when racing resumed, second placed Bottas struggled with his tyres and had to hold off late pressure from a closing Leclerc. Also, Norris looked set to finish seventh behind his team-mate until a worsening hydraulic issue dropped him to tenth, still just inside the points paying positions.

So, the weather and the location were beautiful for the French Grand Prix, but it was hardly a great advert for the sport I have long been so passionate about. Next up, in less than a week’s time, comes the Austrian Grand Prix weekend at the beautifully situated Red Bull Ring, which is a real personal favourite and where I hope we will enjoy a far more exciting Grand Prix.

With the F1 circus needing over 300 heavily laden articulated vehicles to transfer everything from circuit to circuit in Europe, there was no time to linger in the south of France as packing up as quickly as possible was the priority straight after the race before hitting the road for the Austrian alps. Wunderbar, as the Austrian locals rightly like to describe the location of their race on the Formula 1 calendar.

Last year it was fun to witness in Austria a travelling army of over 30,000 orange clad and good natured Verstappen fans, who so enjoyed seeing their man take an unexpected victory, and I suspect there will be just as many there next weekend, although another win for the young Dutch star will be difficult, if not impossible. Bring it on.