The Moustache By Emmanuel Carrère - A Review 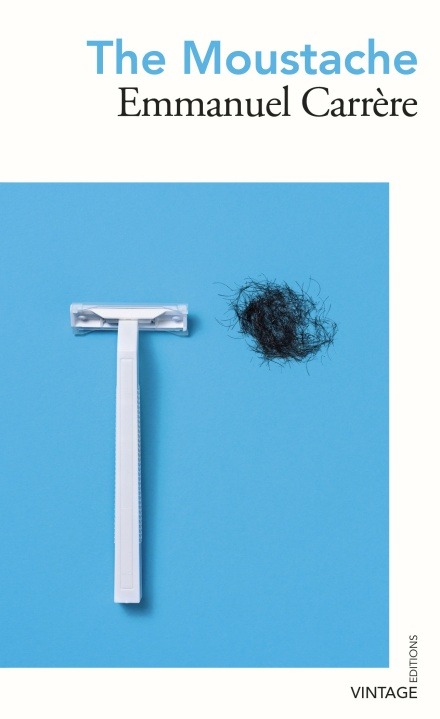 The Moustache, first published in 1986, features in a new series, Vintage Editions, and is reprinted by Penguin in a collection celebrating some of the finest authors in translation.

A review in The Times roused my curiousity: the reviewer, John Self, introduced Emmanuel Carrère as a writer who has "been described by critics as 'straight beserk' and 'tremendously French'". Reading the novel, I couldn't help but agree with this phraseology. The story is one that begins with a fairly innocuous and insignificant event that spirals towards what can only be described as a profoundly disturbing conclusion. Revisiting the review, I was relieved to find my response was not unique.

Sometimes when watching excellent French films, I find myself thinking that the concept and main thrust of the plot could “only be French”. Quite how to pinpoint or describe this notional genre is impossible, but I expect (I hope!) this characterisation isn’t peculiar to me. Irrespective of classification, The Moustache is French conceptual prose in extremis, and it is utterly captivating, compelling and devilishly beguiling.

The unnamed protagonist has worn a moustache for at least a decade. One day, on a whim, he decides to shave it off. However, no one notices. It's true that people can sometimes fail to notice even obvious changes to the things they are used to seeing frequently. Familiar items, friends, family members no longer command your attention, conscious observation is abandoned in favour of their assumed appearance. In this case, however, the indifferent response to the absence of a moustache triggers a sequence of cause and effect that occupies the remaining narrative.

Thematically the book explores a great deal about perception of self, the presence of identity, how this may define a person and what might happen when deprived of self-identity. Physicality can become irrelevant, you are known to people for who you are, and not precisely what you look like. It is perhaps only the self that cares about appearance, how one is perceived by the wider world. You cannot necessarily control your character, your foibles or your body language, but you can control how you style your hair and how you dress. But what happens when even that is questioned?

Emmanuel Carrère
Our protagonist enters a protracted standoff with his beloved wife Agnes. They vacillate between mutual suspicion of insanity and passionate sexual trysts to rekindle the diminishing trust. Agnes' character is given a backstory suggesting that she have a vindictive side; not malevolent, but not straightforward. Paranoia extends its strangling tentacles; unspoken agreements are forgotten but we infer through their sexual engagement how he draws reliance and sustenance from her. This exacerbates the sense of deceit, he cannot disbelieve her, but neither can he believe her. He cannot trust his own instinct; she has this power.

Our central character then progresses through a myriad of explanations, carefully reaching definitive conclusions only to unpick each and every one piece by piece. The reader is left to question the reliability of the narrator, simultaneously despairing for the latter’s torment, whilst doubting his or her own objective judgement. Every conclusion emerges with a degree of plausibility, but also leaving so much unresolved.

We then follow him on what begins as a superficially nonsensical journey, with every page turn awaiting the inevitable plummet into dark, menacing, psychological horror. It is a powerful read: the simultaneous lure and threat of the unknown, twinned with a sense of foreboding and ultimately, your own desire to find an answer – however unlikely this will be.


Also by Caroline Spalding...
Review: Earthlings By Sayaka Murata'When You Divide Death By Life You Find A Circle': Apeirogon, A Novel By Colum MccannAn Interview with Lorraine BrownReview: Uncoupling By Lorraine BrownInterview: Eleni Kyriacou
It is perhaps reductive to say that this novel explores what happens when a person’s concept of normality is called into question. We bear witness to a man who has lost his framework, the scaffolding that maintains the construction of his life. His normality is what appears to give him strength and without it, he begins to unravel. He takes flight; self-doubt and suspicion cause his own personal compass to waver and without purpose he loses his sense of direction. He is caught between derision of self, and contempt of others. Hate walks hand-in-hand with abject fear.

The book also examines the nature of loss: the depths to which a person may plummet when something is lost, however insubstantial it may appear. An individual's unravelling can pass by unnoticed in the grand scheme of things: an inner world may exist in turmoil within an external environment that pays it no heed.

The author offers no attempt at an explanation, no attempt to rationalise his narrative. It is correctly ascribed to the genre of psychological horror and we accept the definition as a given, there are no answers provided. Perhaps Carrère is commenting on how closely we cling to our sense of normalcy, our routines, and when the balance is disrupted, how powerful our minds may become, the body so feeble in comparison.

Above all, The Moustache is a comment on the power of the mind and how utterly terrifying it may be when one loses control of it. The ending will disturb most readers, it comes almost abruptly, shutting down the narrative after another inexplicable twist. This is not a book that is read, it is a book that is to be experienced – a perturbing, immersive but ultimately captivating story that will not be forgotten.


The Moustache, translated by Lanie Goodman, is published by Vintage (Penguin Random House)