The Ship And The Storm - Antigone At The Square Chapel, Halifax

The newly refurbished Square Chapel Arts Centre has hosted the world premiere of Antigone by the Actors of Dionysus. 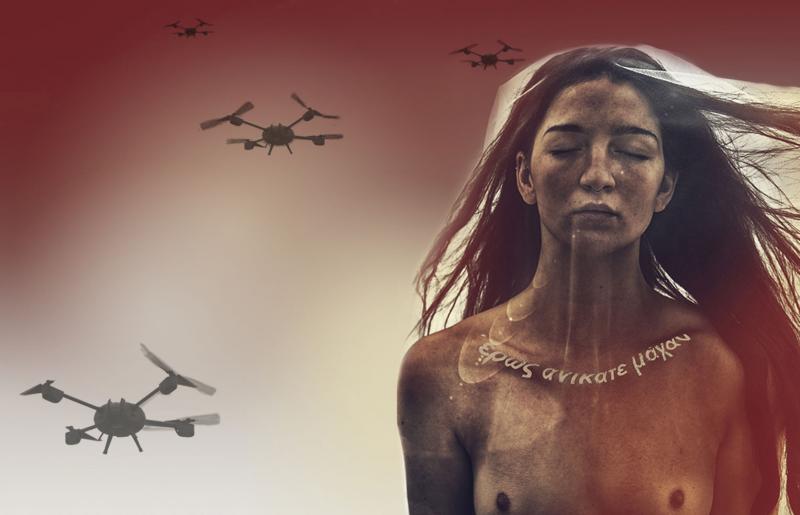 There was a moment in Actors of Dionysus' (AOD) adaptation of Antigone at Halifax's Square Chapel Arts Centre on Friday, when all other considerations in this ethically-complex Greek tragedy fell away.

The heroine, played with relentless stoicism and gravitas by Holly Georgia, expired silently on a plinth in the cage of her tomb wrapped in a white silk winding sheet, and for a moment, our audience disbelief thoroughly suspended, the inevitability of Tragic necessity was revealed to us.

Antigone's death is the point at which the domino drops, at which her betrothed, Haemon, is doomed to suicide and at which her uncle Creon, whose immovable commitment to leaving her publicly outcast brother, Polyneices, to rot in the sun, is obliged to watch his own life unravelling.

Not the least of AOD's achievements here is making visible the paradoxical conundrum of an irresistible force colliding with an immovable object.

Antigone's plea for love and respect for the dead are the obverse of Creon's cold, misjudged certainties. The Chorus in Jean Anouilh's deeply political, 1944 version of the play gave an overview of the tragic form from within its own boundaries - 'Tragedy is clean, it is restful, it is flawless' - and a moment of synthesis is distilled like clear water in Christopher Adams' new take.

Under the expert direction of Tamsin Shasha, the essential ambiguity of the protagonists' respective positions gives way to an open-eyed realisation of a horror, which also clarifies.

Adams' Antigone shares more than a passing handshake with Anouilh's own, and that commerce is given vigorous life in a performance of noisy, visceral integrity.

Conceived during the Nazi occupation of France, Anouilh's adaptation became a call to resistance by harnessing Creon's iron-handed fixity to the Nazi jackboot.

In this scenario, Antigone came to represent the beating heart of France, resistance to tyranny. Established rituals of burial, the heroine's raison d'etre, are sacrificed by Creon to humiliate the dead as a warning to the people.

The new version brings the action forward to a dystopia of the present or near future, and its relevance here underlines the time-transcendent nature of the Tragic form.

AOD have always succeeded in making a little go a long way and the design team deserve credit for rendering the impervious claustrophobia of the major protagonists by enclosing them in mobile circular frameworks which have the ironic effect of suggesting both entrapment and visibility.

Dressed in a dark, high-necked jacket, and armed with a one-dimensional intensity of purpose, Creon reeks of a Commander in Atwood's Handmaid's Tale, though in the hands of a performer as subtle as Nicholas Cass-Beggs, we remain sensitive to his weakness, to the presence of a conscience weaned on blood kinship, and to a propensity for miscalculation.

In an ingenious move, the Chorus become the 'City Archivists' - a group of robots, played in exemplary robotic fashion by the cast, who are programmed to respond to questions about the past, about former existences, which begin to sound halcyon as the drama unfolds. Their responses come to embody warnings as the common humanity of a former time is weighed against the totalitarian suggestions of the present.

And no opportunity for modern referencing is passed up. Creon's faith in the power of the microphone, his use of propaganda, fabrication of 'fake news', and timely 'bread and circuses' dispensations, are all hallmarks of a descent into repression, and are clearly intended to flag up current events. The use of a real Drone on stage to indicate both surveillance and the flight of Polyneices' soul, must be a theatrical first.

A little overdone, maybe: the adaptation is perhaps too self-consciously aware of the authority of Tragedy to find mirrors everywhere in the modern condition. But this is a minor criticism of an otherwise excellent production, played out against a repetitively narcotic soundscape conjured by Matt Eaton.

When Tamsin Shasha, Director and original inspiration for AOD, appeared on stage after the performance, it was to hymn the company's twenty five year-long connection with Halifax. It was fitting, she said, that Square Chapel should be the choice of venue for the premiere of this new adaptation of the Greek classic, given such a lengthy and fruitful artistic association.

There was an almost lachrymose sincerity to Ms Shasha's words. Long may the association continue.

Antigone - Touring until 27th November
Also by Steve Whitaker...
Poem Of The Week: 'Sonnet 29' By William ShakespeareReview: Ings Strings At Art In The Dale, Kirkby MalhamPoem Of The Week: 'This train has left the city ...' by Paul HenryAlbum Review: Staring At The Sun: Talking About X By JARRPoem Of The Week: 'Giorno Dei Morti' By D. H. Lawrence (1885-1930)