The Sound And The Fury: A Hero Of Our Time By Mikhail Lermontov

Mikhail Lermontov
Mikhail Lermontov’s A Hero Of Our Time (1840) was a game changer of seismic proportion for Russian literature. It was a pioneering psychological novel, confronting its readers with a minatory and unforgettable protagonist in the form of Pechorin, its Byronic “Hero”. Lermontov both broke and created literary conventions in order to provide society with a depiction of a monster it had made. Its central message, though bleak, finds expression through Lermontov’s literary innovation and ability to keep his reader entertained and appalled! Perhaps more significant as a literary milestone than a masterpiece, it is a powerful work and one which catalysed my passion for the works of Tolstoy, Dostoevsky and Chekhov. If not a great Russian classic, for me it’s a hugely significant novel and a fascinating read!

Beyond the trailblazing literary devices Lermontov draws upon to engage and provoke his reader, perhaps the novel’s success rest upon its author’s ability to make us recognise Pechorin as a product of a diseased society. Even more importantly, Lermontov wants us to pity the plight of Pechorin, despite his hideously misanthropic misdemeanours and reserve our scorn for society itself. Sympathy for Pechorin and his amoral character, or his compulsion to eschew morality in favour of fiendish amusement, is absolutely vital for the book to drive its message home.

Let’s face it - it is difficult to have sympathy for a literary monster. Shakespeare’s Iago was to my mind a nihilist delighting in his power to induce the destruction of others. Samuel Taylor Coleridge described Iago’s soliloquies as the “motive hunting of a motiveless malignity”; he cannot, therefore, be deserving of our understanding or pity. Shelley’s Frankenstein (1818) is also a monster. Shunned by society, this tormented creature is understandably motivated by revenge against both its persecutors and its maker. The creature undoubtedly deserves compassion, but our pity is not much more than an intellectual concession. Shelley’s gothic horror addresses huge questions and leaves me shaken, but not stirred.

Now as for Pechorin, whilst he too is utterly monstrous and shares Iago’s nefarious cunning and sadistic appetites, his very humanity eclipses my, perhaps, detached response to Frankenstein. Pechorin’s motives are understandable, if morally inexcusable. Consequently his torment elicits a measured sympathy and pity for his plight and those like him. Lermontov uses his readers’ responses to this abomination of a man to lift the carpet off society and expose what is underneath. The more we are appalled by Pechorin, the more we are forced to address why he is so relentlessly amoral.

Although the novel is not autobiographical, a little understanding of its author sheds much light on its central protagonist and themes. Lermontov was born in 1814 in Moscow and his formative years were spent under the repressive care of his aristocratic grandmother on her noble estate. By fourteen he was composing poetic verse full of complaints concerning isolation and dashed hopes. Later, unhappy love affairs deepened his alienation and bitterness. After formal education, he joined the Russian Cavalry Training School and was subsequently commissioned to the Hussar regiment. As a young officer in St Petersburg, he developed a severe disdain for polite society and became increasingly disenchanted with his life and society at large. Fertile ground for planting the seed of Pechorin in his mind. 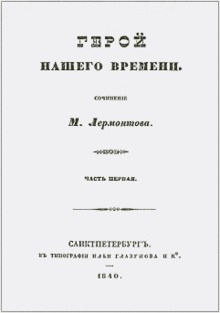 Lermontov’s response to the death of Pushkin resulted in his publishing The Death of a Poet in 1837. It was a savage denunciation of Russian society and earned him exile to a regiment in the Caucasus. Now regarded as the literary heir to Pushkin, he continued to publish poetry deeply critical of society. Shortly after his exile, he returned to St Petersburg only to kill the son of the French Minister in a duel. He was immediately sent back to the Caucasus. Twelve months later, he quarrelled with a Russian Major, resulting in another duel and his death at the age of twenty six. His literary career had spanned just twelve years. “A Hero” was written in the last couple of years of his life and set in the Caucasus of the 1830’s. Lermontov poured his scorn for society into his rebellious romantic novel and held a mirror up to that society in the form of Pechorin.

“A Hero” was a landmark in Russian literature. Heavily influenced by Pushkin’s novel in verse Eugene Onegin (1831), it was radically original and is arguably the first psychological novel in Russian literature. Significantly, Lermontov pioneered the use of prose rather than verse to craft five episodes in the life of his swashbuckling protagonist. Each is complete in and of themselves, but incrementally adding complexity and substance to his character. Pechorin’s “Journal“ sits at the heart of the novel providing a profoundly shocking analytical insight into its fictitious author. The surrounding vignettes colourfully portray the novel’s characters and landscapes, but all focus our attention on its protagonist’s urbanely-masked turpitude. Because these episodes blend together, though lacking a plot, the book feels far more like a novel than a collection of short stories.

Lermontov influenced Tolstoy, presupposing the latter’s psychological, analytical method and his visceral rendering of Nature. He foreshadowed Dostoevsky by wrestling with the nature of evil and the complexity of the human personality. Even Chekhov owed a debt to Lermontov and acknowledged it by referring to an episode in the novel (‘Taman’), as a model for the art of short-story writing. Lermontov set Russian literature on a course that would see its prose novelists produce some of the most magnificent works in the literary canon. Not bad for a chap who had a lamentably short literary career!


Also by Paul Spalding-Mulcock...
The Delights of SerendipityDennis Wheatley: The Man Who Monetised The 'Beast'Mile High Musings - On NarrativeReview: Sideways By Rex PickettHowards End : Love At First Read
Lermontov departed from Russian literary tradition and cast Pechorin in the mould of a Byronic hero. He took the model of a strong individual at odds with the world and concentrated his focus on illustrating a fundamental contradiction. Pechorin is energetic, highly intelligent and indomitable. However, rather like Lermontov himself, he finds that life and society per se do not measure up to his expectations. He becomes monstrously embittered, cynical and virtually inert. His boredom is its own curse, and the fetid soil in which his character and soul decompose. Pechorin is a twenty five year old noble who has discovered nothing in life worthy of his talents or energies and thus squanders them on pointless adventures and cruel persecutions. Lermontov wants his reader to grasp this point and shudder.

So what does this tormented monster actually do to warrant our dismay? He breaks the hearts of two infatuated women and, in the case of Bela and Grushnitsky, makes them pay for their feelings with their lives. True, Bela’s death moves our stony-hearted miscreant, however it does not change him. Vera is the only character in the book to penetrate Pechorin’s callous exterior and even she suffers at his hands, like a mouse to an amused and spiteful cat. Deeply troubled, he torments practically everyone he meets - “as flies to wanton boys“. He shows himself to be manipulative, cruel and ruthless in pursuit of distraction.

Lermontov invites us to take a close look at Pechorin’s motives for behaving as he does. Doing so is intended to shift the focus of the reader’s outrage from Pechorin to society, from effect to cause. In his own Journal, Pechorin acknowledges his vampiric nature as the motive compelling him to nourish his ego on the pain of others. Pechorin’s frustrated sense of ambition and resentment towards life has caused his own predatory bitterness. Mediocrity has festered within his soul, causing him to turn away from goodness, feelings, compassion and idealism. The only avenue left for his poisoned life force is to follow his darkest impulses and entertain himself with petty amusements and acts of genuine evil. He, like Lermontov, was a victim of Nicholas I’s brutally repressive society.

As the author tell us in his Preface, “this is how a hero of our time must be”, “characterised by decisive inaction, or else by futile activity”. Whilst Lermontov had no cure for this “malady”, he holds society entirely accountable for men like Pechorin, not born evil but made evil. In my view, society was Lermontov’s unpitiable monster and Pechorin a salutary warning against its evils.

This is a novel of significant literary innovation. It is also a great read, if not the pièce de résistance of Russian literature! Lermontov succeeded in his aim of creating a profoundly provocative monster. That said, I won’t be going out to buy a T-shirt with his face on it à la Che Guevara. Even i’m not so susceptible to a Byronic hero, however well intentioned his author might be!