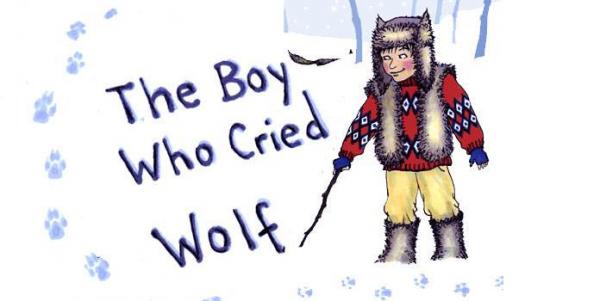 The Boy who cried Wolf
To tell the truth, when the word 'children's' is put in front of the word 'theatre' it just makes me recoil. All I can think of is dumbed-down writing, cringe-worthy overacting and terrible, terrible songs.

However; once upon a time (Tuesday 1st Oct), a cynical wicked witch (me) found herself centre-stage, second row and a little bit excited about the upcoming performance of the Aesop fable 'The Boy Who Cried Wolf'.
After having met with Wendy Harris, artistic director of the children's theatre company, Tutti Frutti, and being familiar with the work of writer Mike Kenny, I was hopeful that this would be no ordinary children's play and, of course, it wasn't.

Forget about an intimidating old theatre with dusty red curtains; this performance was given in the studio at York Theatre Royal. The intimate space, with its dimmed lighting and knitted stage props, was almost as cozy as climbing into bed for a night time story when it's raining outside.
Just three actors took to the floor to tell us their version of the well-known tale which included a lot of knitting, a few animals, a couple of songs, and just the hint of an underlying moral.

It remains mystifying how these actors managed to convince an entire audience (of all ages might I add!) that they were a charming family consisting of a grandfather, mother and son, three entirely hilarious sheep and three scary wolves all in under an hour.

What was particularly good about this production was that the children in the audience were captivated from the offset but, as it happens, so too were the adults. It was enchanting, uplifting and could melt the heart of any children's theatre cynic. Definitely recommended.

The Boy Who Cried Wolf is showing at York Theatre Royal until Saturday 12th October.