Verstappen Crushes The Opposition In Styria

After the edge of the seat excitement at last weekend’s French Grand Prix the F1 circus quickly moved on to rural Austria for the first of two back-to-back races at the beautifully located Red Bull Ring and this afternoon it was championship leader Max Verstappen who dominated for his Red Bull team. 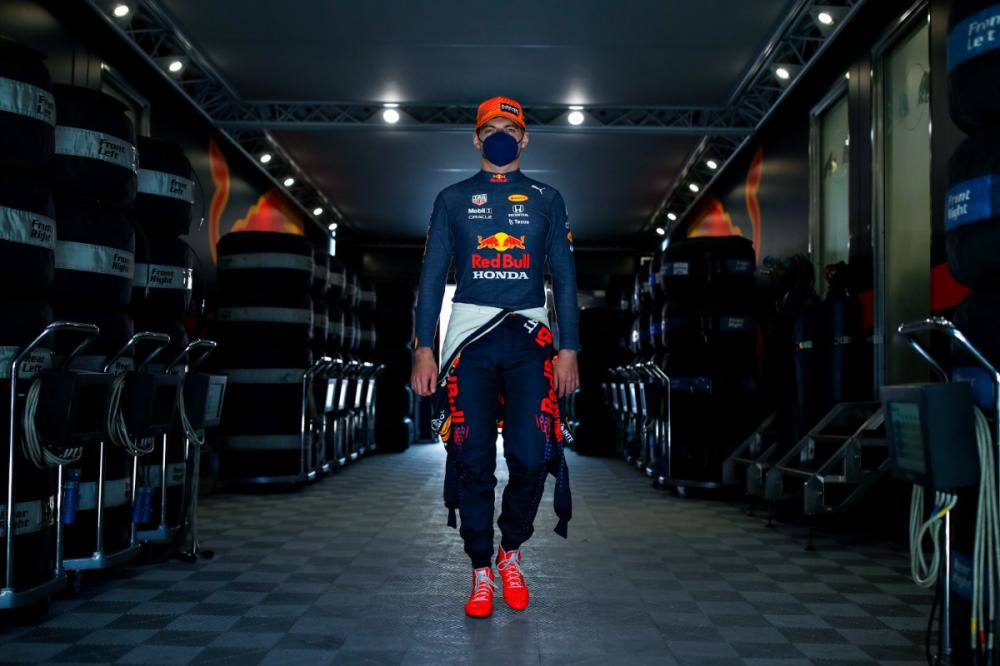 Red Bull’s Max Verstappen put in a faultless display to earn the victory spoils
Today’s race was called the Styrian Grand Prix because of the region of Austria where the circuit is situated and the second event next Sunday will be known as the Austrian Grand Prix. The track is only 2.7 miles long, with just 10 corners, and lap times are the shortest on the F1 calendar. There’s a lot of elevation change too - I well know from personal experience that it’s a long uphill walk to Turn 3! A combination of outright engine power and carefully honed handling are of paramount importance and, with tyre degradation typically low, a one stop race strategy tends to be the norm.

The circuit has three separate DRS zones, generating plenty of overtaking opportunities and particularly at the heavy braking entry to the Turn 3 righthander and on the downhill run to Turn 4. In 2020 there had been four Safety Car periods during the two Austrian races and the teams’ strategists were all too aware that any repetition could significantly impact their plans and the results. Turn 6 was modified for this year, with the gravel area moved much closer to the edge of the track and the previous sausage kerbs removed. This followed requests from the teams and drivers to use gravel rather than kerbs to encourage adherence to track limits.

In the build-up to the opening Austrian weekend there had been an announcement from the FIA governing body that for safety reasons Formula 1’s quickest pit stops are set to be slowed wef the Hungarian Grand Prix at the beginning of August to ensure they are fully down to human reactions rather than any automated assistance. Teams have been given three races to adjust their procedures and equipment if need be. The move was welcomed by Mercedes and McLaren, but Red Bull, who have set the fastest pit stop times this season, saw it as an attempt to slow them down and described it as “disappointing”, with Ferrari and Alfa Romeo adding that it would be much better if the FIA spoke to the teams before issuing such technical directives without any prior warning. 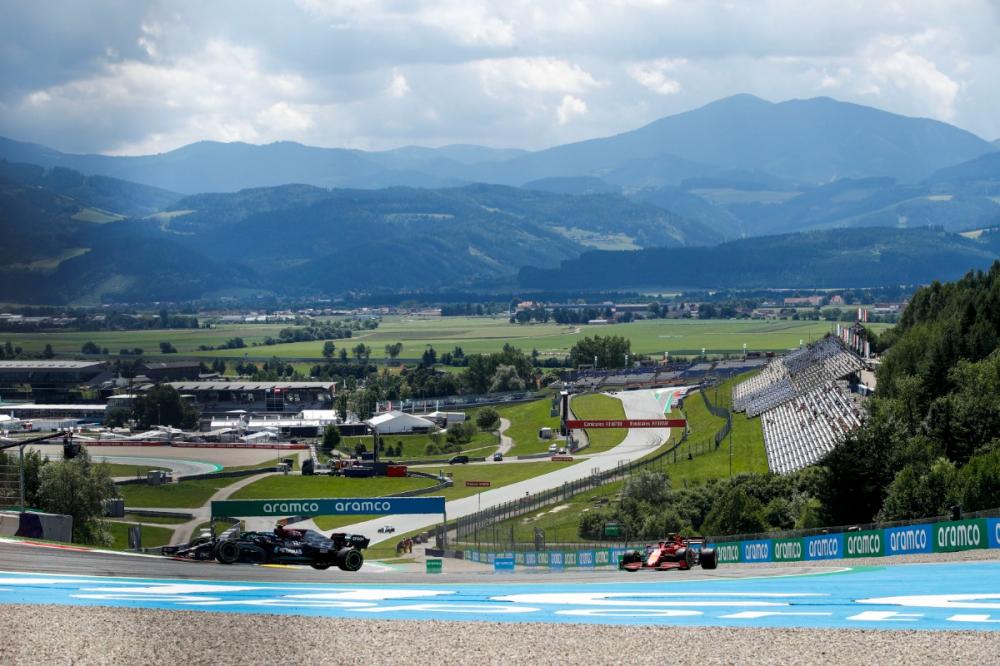 Austria’s Red Bull Ring is one of the most beautifully located circuits in the world
On Friday morning there was news that the Turkish Grand Prix has rejoined this year’s calendar as a replacement for the cancelled Singapore event on 1st-3rd October. It had originally been due to replace the cancelled Canadian Grand Prix on 13th June, but was postponed due to travel restrictions imposed by the UK Government. This leaves this year’s F1 calendar with 23 races again and Turkey will be part of an autumn back-to-back triple-header slotting in after Russia and before Japan, which F1 still hopes to visit. Doubts remain though about some of the late season events, including those scheduled for Brazil and Australia in November. There was further calendar related news yesterday morning too when it was revealed that with effect from 2023 the Russian Grand Prix will move from its current Sochi Autodrom home on the Black Sea to the Igora Drive facility near St Petersburg. The latter was completed in 2019 and last year received an FIA Grade 1 licence required to host F1 events.

Turning to the ontrack action in Austria, after Friday’s opening free practice session it was Verstappen who topped the timesheets ahead of the AlphaTauri of Pierre Gasly and Sir Lewis Hamilton and Valtteri Bottas for Mercedes, with various drivers having times deleted for track limits infringements. The afternoon second practice period featured a bizarre spin in the pit lane for Bottas as he experimented with starting in second gear after a stop, endangering the nearby McLaren crew who nevertheless still helped get him pointing in the right direction again. The incident earned the Finn a subsequent visit to the stewards and a three-place grid penalty for the race. On the circuit itself Verstappen again went fastest, followed by McLaren’s Daniel Ricciardo, Esteban Ocon’s Alpine and Hamilton, with Bottas only 12th quickest and Gasly having to miss the whole session whilst Honda engineers checked his power unit.

In Saturday’s final practice period Hamilton led the way, although best of the rest Verstappen’s final laps were disrupted by traffic. Bottas and Red Bull’s Sergio Pérez completed the leading quartet. Come the qualifying hour, which began at 3pm local time, it was Verstappen who added a sixth F1 pole position to his CV, with Bottas posting the second quickest time but having to drop to fifth on the grid due to the penalty he had picked up during second practice. This promoted Hamilton to second, who lapped 0.226s slower than his championship rival and made a mistake at the penultimate corner on his final Q3 lap. McLaren’s Lando Norris has been in fine form of late and at a circuit he loves he was set to start on the second row with Pérez. The highly impressive George Russell again outqualified his Williams team-mate Nicholas Latifi and was 11th fastest, missing out on the top ten shootout by a mere 0.008s as the 23 year old British rising star hopes to impress Toto Wolff sufficiently to promote him to the Mercedes team next year. 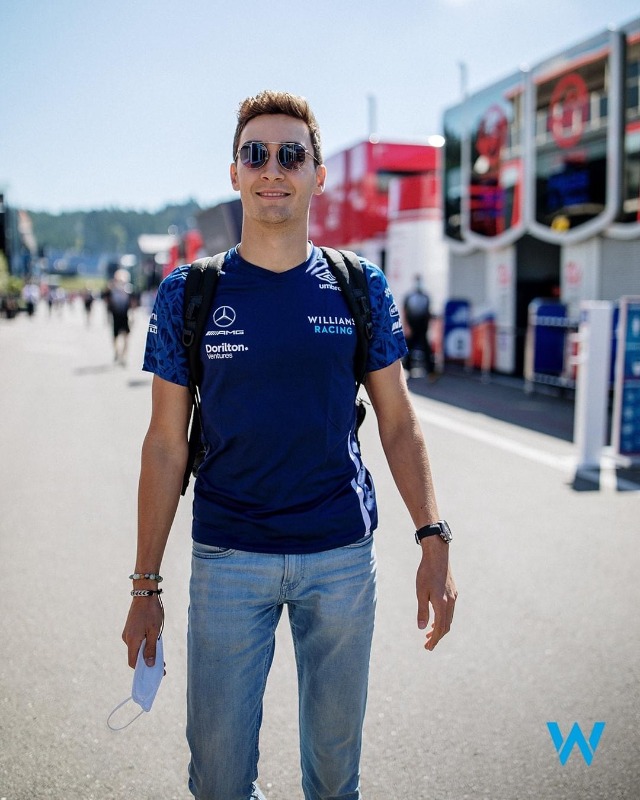 23 year old George Russell again so impressed before his Williams car let him down
AlphaTauri’s Yuki Tsunoda was eighth quickest, but, following a subsequent investigation by the stewards for appearing to hold up Bottas at Turn 4 during the Mercedes driver’s first flying lap in the final part of qualifying, the young Japanese rookie was given a three-place grid drop and a penalty point on his FIA super licence. This demoted him to 11th position on the grid and promoted Alpine’s Fernando Alonso, Aston Martin’s Lance Stroll and Russell each by a single place.

The conditions were bright and sunny as the grid formed for the start of this afternoon’s Grand Prix, with the polesitter facing a 245 metre sprint to the opening righthand corner, and when those famous red lights went out Verstappen made a great start and quickly covered off the threat posed by Hamilton. As the following pack squeezed through Turn 1 Charles Leclerc damaged his Ferrari’s front wing after contact with Gasly and had to pit immediately, whilst his French rival was out of the race with a left rear puncture and related car damage. 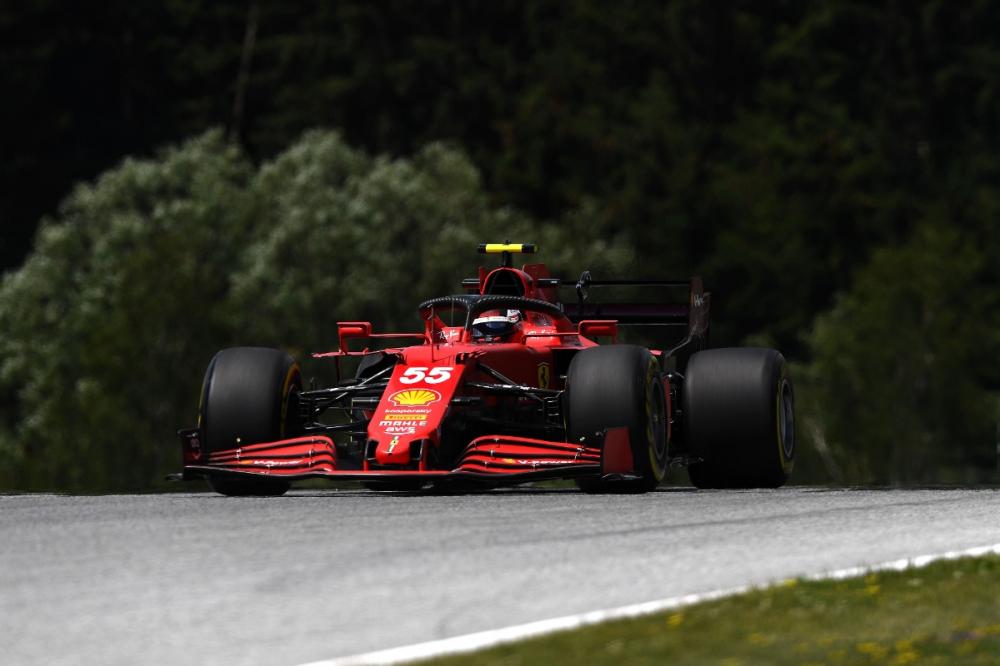 Carlos Sainz started 12th, but finished 6th for Ferrari
As the race progressed, Ferrari’s Carlos Sainz edged up to sixth position on lap 45 after sprinting past Stroll on the run down to Turn 4 and out front the relentless Verstappen continued to extend his lead over the chasing Hamilton, with Bottas and Pérez well adrift to their rear. With 16 tours remaining, Red Bull pitted Pérez again for medium tyres and these soon enabled him to set the fastest lap of the race at this stage as he set about closing the 20s gap to Bottas. The skies then darkened, with a threat of rain in the air, but it was to amount to nothing and by the chequered flag Pérez was just a half second behind third placed Bottas.

1 Red Bull 252
2 Mercedes 212
3 McLaren 120
Mercedes pitted Hamilton on the penultimate lap for soft tyres and the reigning champion quickly used them to earn the extra point for the fastest race lap, but he had to settle for a distant second place behind the victorious Verstappen. Norris again put in a strong drive to finish as the best non Red Bull or Mercedes driver ahead of Sainz and the recovering Leclerc and the remaining points scoring positions were occupied by Stroll, Alonso and Tsunoda. 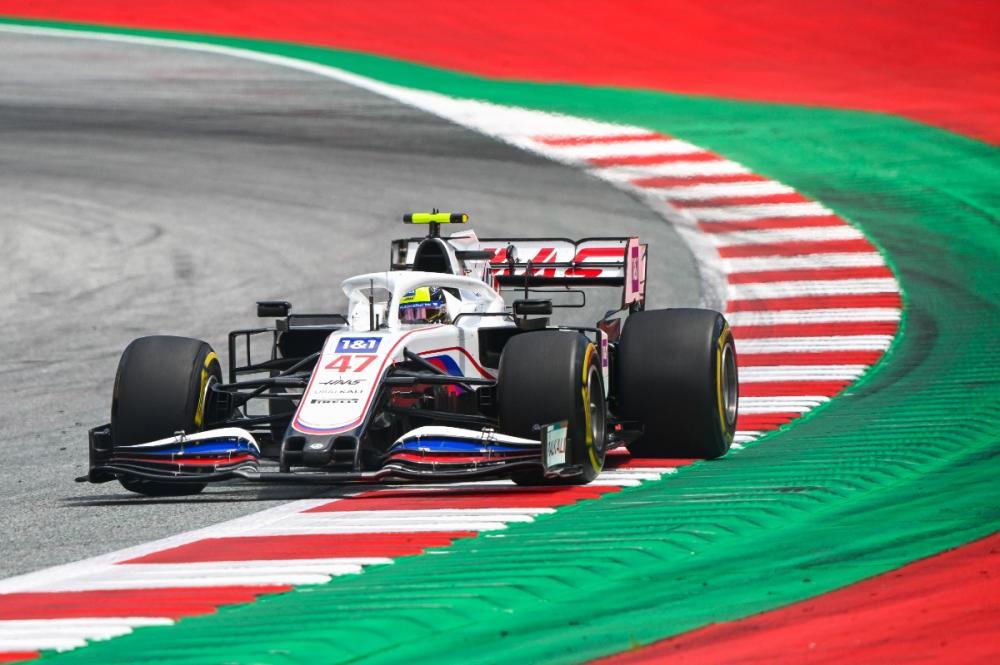 F1 rookie Mick Schumacher has been helped by Sebastian Vettel, just as he was assisted in the past by Mick’s father Michael
So, opening practice for the next event on this year’s calendar, the Austrian Grand Prix, starts at the very same location in just five days time, and I can think of far worse places for the F1 circus to remain during the short interim period. Will Verstappen continue to extend his lead in the drivers’ championship or will Hamilton fight back as this most thrilling F1 season for many years continues to develop? We won’t have to wait long to find out.