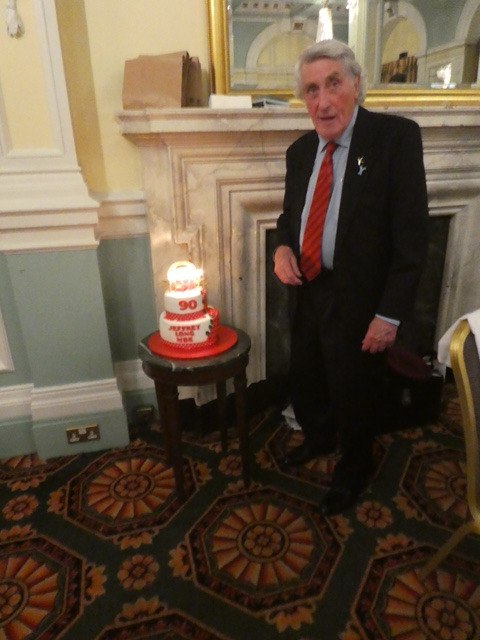 Jeffrey Long MBE, who has a distinguished history of charity fundraising celebrated his 90th birthday with a charity fund raising dinner in aid of Cancer Research and Macmillan Cancer Support at the Midland Hotel in Bradford.

The event has raised so far £2,000 for both charities with more expected. The dinner included a raffle with prizes donated by local businesses. The event was attended by the Deputy Lord Mayor of Bradford Council, Bev Mullaney who presented Mr Long with a gift from the City of Bradford in honour of the charity walks the veteran fundraiser has accomplished over the years.

For the last four years Jeffrey has been challenged with blood cancer coupled with a back injury sustained during parachuting whilst in service, though this did not stop him setting out on a 190 mile charity walk earlier this year in celebration of both 100 years of The Royal British Legion and 90 years for Support Our Paras.

Aged 75, Mr Long walked 650 miles from London to Lausanne in Switzerland, his other successes include a 127 mile walk alongside the Leeds-Liverpool canal and a 100 mile walk in 10 days between 10 RAF stations.

The former paratrooper from Bingley has raised more than £300,000 for charities over the last 14 years and has even had celebrity endorsement from Jason Manford.

Asked what his next fundraising event will be Jeffrey said “Another walk of course, 91 miles in my 9lst year” Long may he walk on.
Also by Graham Clark...
Interview With FiveGary Barlow Relights The Fire In SheffieldThe Offspring Let The Good Times Roll In LeedsJames - Still Getting Away With It At Leeds ArenaSam Fender – On Fire In Leeds