The second generation of Volvo’s premium mid-size SUV has been on sale for a couple of years now and despite an array of talented opposition, it still competes for class honours. 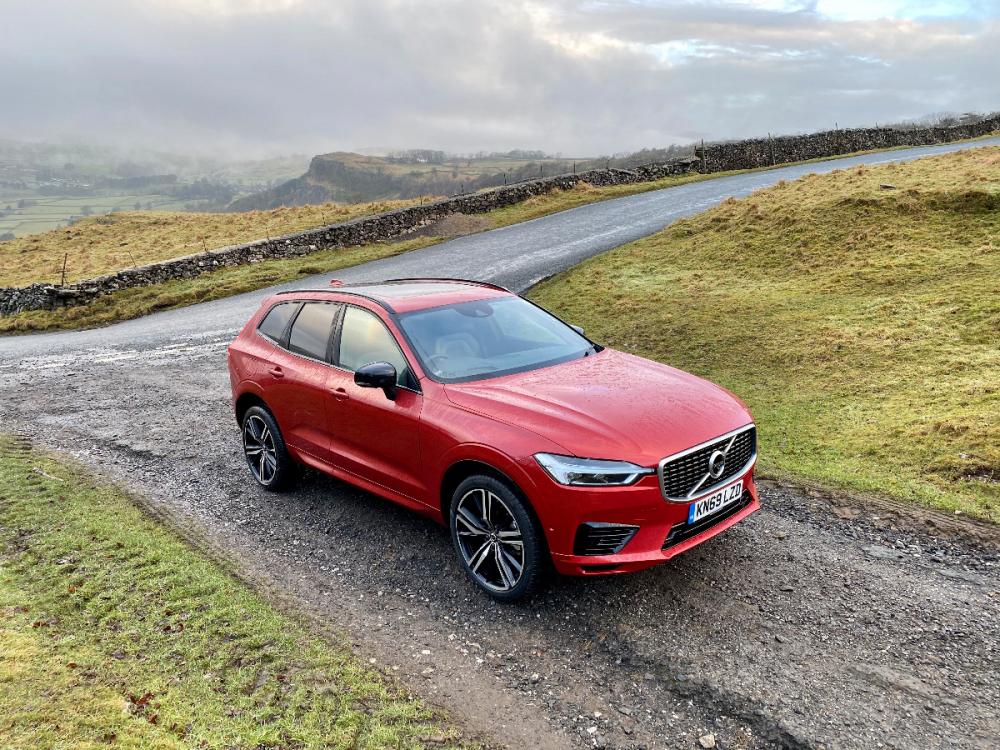 The Germans lead the charge with the BMW X3, Audi Q5 and Mercedes-Benz GLC, whilst home grown offerings from Jaguar and Land Rover cannot be ignored.

The XC60 is a fine example of Volvo’s current design language with clean, simple lines and some distinctive touches such as the T-shaped daytime running lights and signature L-shaped tail lights. 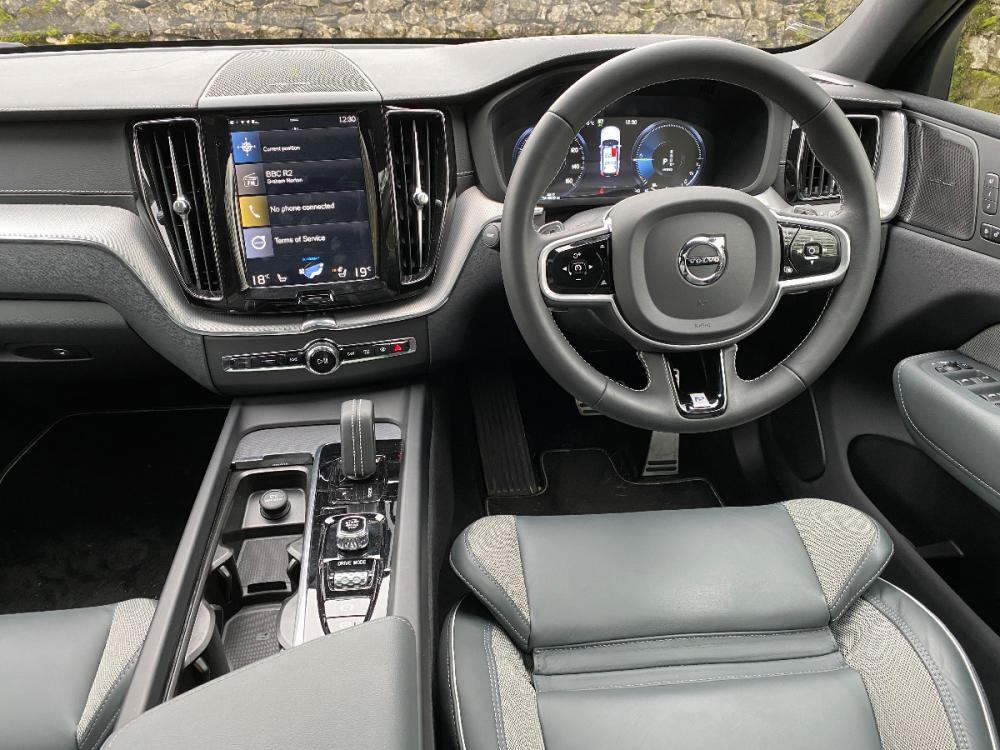 The interior is an absolute delight and showcases the very best of cool, Scandinavian design. Classy soft-touch materials abound and the intuitive Sensus touch screen control system has allowed the interior to be pleasantly free of superfluous switches and buttons.

The seats both front and back are supremely comfortable and supportive, though the sculptured shape of the front perches on R-Design models create a rather uncomfortable lip for those of shorter stature to clamber over. My wife was not impressed!

R-Design models are fitted with a range of visual and mechanical upgrades. Paddles to exert control over the 8-speed automatic gearbox are fitted, sitting nicely behind the perforated leather-clad steering wheel.

With Volvo rapidly moving away from diesel power, the T8 variant of the XC60 has been thrust to the fore. It mates a 2.0-litre supercharged and turbocharged engine with an electric motor. Combined power is 390PS and torque a heady 640Nm.

When running in full attack mode, the T8 can sprint from 0 to 62mph in a sportscar beating 5.5 seconds, with top speed a rather academic 143mph. It feels every bit as fast on the road, which allows for exceptionally rapid overtaking manoeuvres and traffic light getaways.

When called upon to play the role of more sensible family car, there is the option to run silently in electric power mode for a limited time. Driven sensibly, I seemed to manage around 25 miles at A-road speeds, with light use of the accelerator.

There is the option to save the battery if it is needed for a low emission zone and you can also charge the battery as you drive.

The Volvo can also be charged from a standard 13-amp plug or a dedicated charging point.

As with a pure electric vehicle, you can add some brake regeneration into the mix, which helps eke out a little extra distance on battery power. The downside is a rather soft and oddly weighted brake pedal, which does take some getting used to. 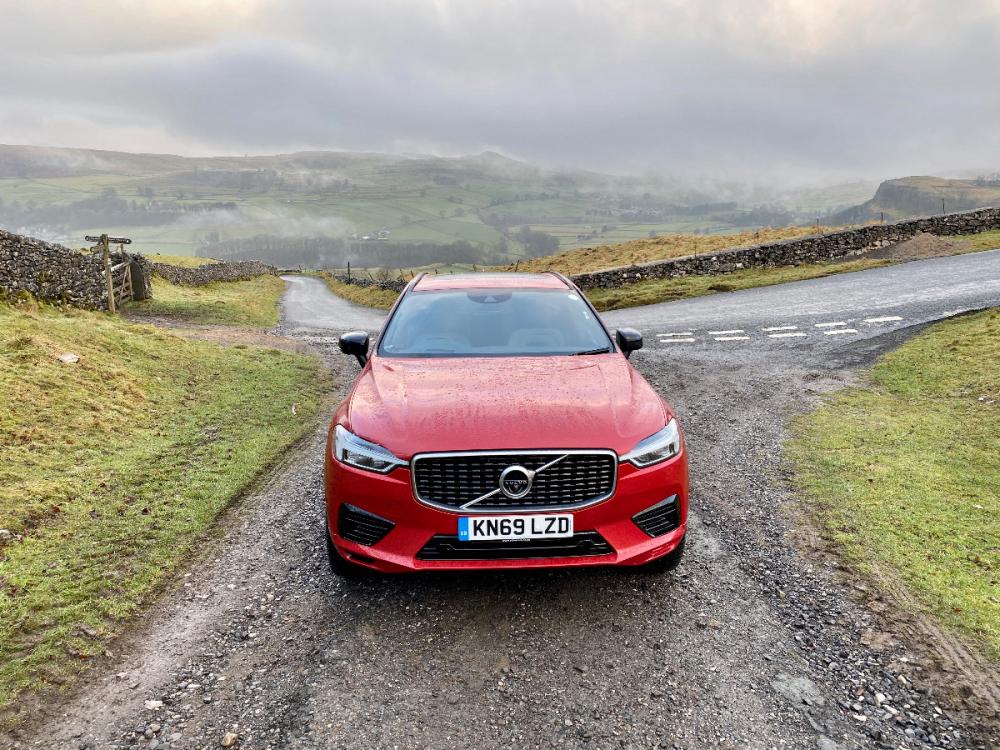 Much of my local running around was accomplished without the engine bursting into life and for the lower mileage city driver, the XC60 T8 will be ideal. However, on one of my busier days I journeyed a little over 300 miles, more than half of which was on motorways. Starting with a full battery and with some recharging from the engine on the move, the trip computer showed an average consumption figure of just 31mpg at journey’s end, a tad disappointing. I’ve no doubt a diesel engine would have yielded more….

This scenario is something we will have to get used to as car production moves increasingly towards a brave new electric world. 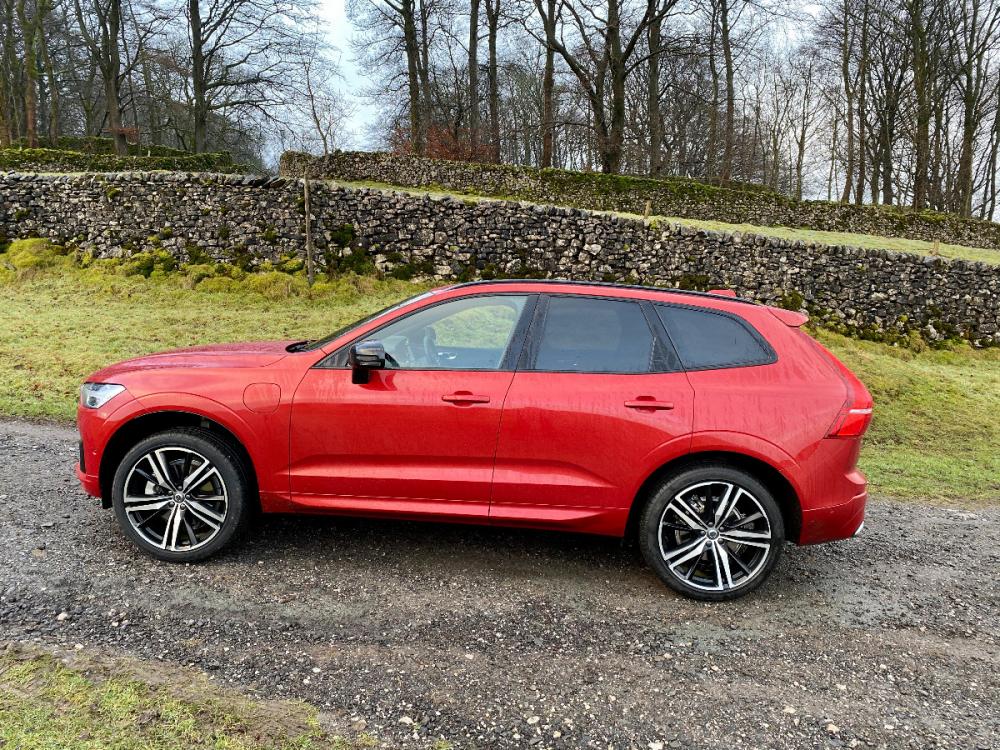 So, what else can I tell you about the XC60 T8 R-Design? Well despite being a more sporting model, the Volvo is better suited to the comfortable cruiser role. Straight-line performance we have established is rapid, but light steering and some body roll do little to encourage an exuberant driving style.

Furthermore, the stiffer suspension and larger wheels combine to make the low speed ride a little on the brittle side. Other XC60 models are better suited to the UK’s less than smooth roads.

The XC60 T8 does boast some off-road ability. With the engine powering the front wheels and the electric motor the back, ‘4x4’ mode should ensure a muddy track or snow-covered lane should not pose any problems.


Also by Andy Harris...
Stinger – Time To Catch Up With Kia’s Range-topperMazda6 Tourer - The Kuro EditionCool Convertible – Honda S800 DrivenA Honda Sort Of DayVolvo XC90 T8 – A Fully Charged Review!
As one would expect from Volvo, all XC60s come with a raft of active and passive safety features. Of particular note are the standard fit City Safe with Steer Assist and Oncoming Lane Mitigation systems. The former can detect pedestrians, cyclists and large animals and will steer and brake in the event of an emergency.

The latter can guide you back into lane if you unwittingly drift across the white lines onto the other side of the road.

I can heartily recommend the Volvo XC60, but whether the T8 model is right for you will depend on the ability to home charge and the use for which it will be put to. There is also the not insignificant £59,670 price as tested!

Unless most of your driving is urban, a diesel powered XC60 makes far more sense and you can knock £15,000 + off the list price too. Buy one whilst you can. 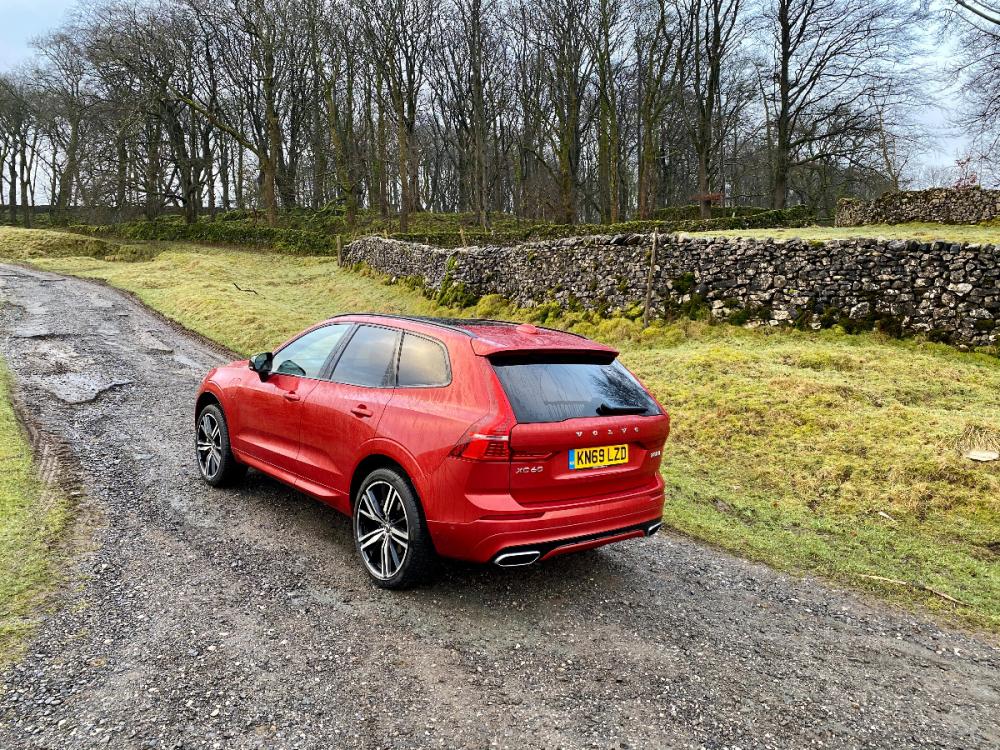 There is however something rather addictive about the T8’s Jekyll and Hyde nature. Silent city running one minute, rapid cross-country sprinter the next.

Oh, I can’t decide. Visit your local friendly dealer, talk to the experts, take a drive. You’ll be glad you did.