Walk the White Rose Way from Leeds to Scarborough 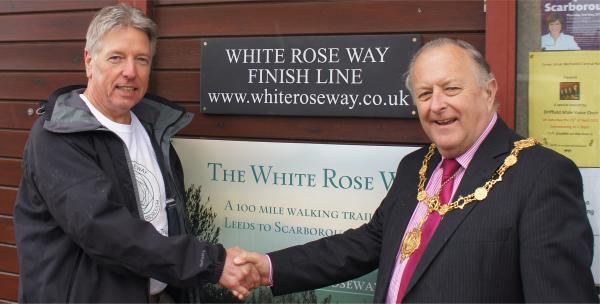 Paul Brown and Cllr. John Blackburn
The White Rose Way walking trail was officially launched at the finish line at The Harbourside TIC in the South Bay at Scarborough on Saturday 14th April.

Showery weather didn't prevent a healthy crowd from attending the event and the finish line plaque was unveiled by the Mayor of the Borough of Scarborough, Cllr. John Blackburn, who was accompanied by the Lady Mayoress.

A large group from Scarborough Ramblers Club came to lend their support.

Praising the book and the beneficial effect of tourism on the local economy, Mr. Blackburn said "It's a very picturesque route through some of the very scenic parts of our marvellous County. I hope it brings lots of people to Scarborough."

The walk is a new 104 mile walking trail which starts in Leeds City Square, passing through Harewood, Wetherby, Boston Spa, Tadcaster, Fulford, Kexby, and Stamford Bridge before heading into the Howardian Hills Area of Outstanding Natural Beauty via Kirkham Abbey.

From there the walks leads into Malton and Thornton Le Dale before traversing the North York Moors National Park to Harwood Dale, Cloughton and along the clifftops into the North and South Bays at Scarborough.
The book contains numerous local and natural history points of interest of the places through which the walk passes.

The book is available at Ł7.99 plus p&p via the supporting website www.whiteroseway.co.uk which also has an accommodation guide and baggage handling contacts.