Matthew Binder
The journalist, polymath and professional pessimist, Peter Hitchens, once cheerfully suggested that in between crisis and catastrophe we might as well have a glass of champagne. And whatever your predilection, there is a refreshingly serviceable truth to his nihilism.

Something of the same order of gallows-insouciance infects the thinking of the central protagonist and narrator of American writer Matthew Binder’s acerbic, in places cruel, dissection of a dystopian US of the near future.

Binder’s landscape is rendered uncannily plausible by its verisimilitude to the world’s current state of affairs: covering all bases of possibility, The Absolved is a sounding-board for present trends, representing a kind of inexorable denouement which is depressingly prophetic as it also, in places, reverses expectation. The narrator’s curiously inverted universe is in some ways a palimpsest of our own.

Henri’s narration is deeply knowing, a forcing-ground for a satire of self-awareness where the only rational response to the absurdity of a tableau imploding around him is to poke fun at it.

The Absolved themselves, an inert former workforce now paid to be indolent in a world of robot-driven productivity, are, as it were, ‘forgiven’ the need to work. But the lack of direction predicated upon idleness engenders a corollary anomie which mirrors the drowning of the proletariat in the ennui of the production line.

You have to have read Marx to be able to deconstruct him, of course, and Binder’s historical sense is thorough and impeccable.

His brilliant pivotal metaphor – that Henri’s own absolution must be earned – re-focuses our antennae on the misogyny and casual misanthropy of an individual who can formulate no other means of engagement/endurance than taking the piss strategically.

He is both of his world and lost to it; his withering cynicism makes of him an étranger, even to those who don’t know it. He is deracinated by his time and his place, and the dramatis personae who occupy his space are atoms in an adjacent nucleus, including, up to a point, his wife, son and infidelatrix. But he is not without warmth or studied fellow feeling.

This is a fine novel. Organised in thought, dialogically persuasive, well characterised and brutally executed, Binder’s peripatetic lifestyle and instinct for observation on his travels, have served him well. 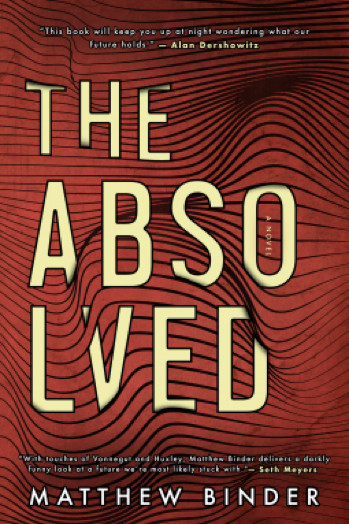 With a natural feel for geo-politics and shifting cultural nuances, he makes strange sense of one possible destination: the groping for something solid in the artifice of the new present is a potent impulse precisely because many of the narrative’s protagonists can recall an earlier time.

Our narrator is freed, to some degree, by his occupation: he is a doctor in a world where almost all work is undertaken by robots.

His work is enabling and, to some extent, meaningful. A temporal reversal of an American health system which now vouchsafes medical care for all, serves to ironise a social structure overwhelmed by a tsunami of political correctness.

The variations of political opinion – the Republican Party has disintegrated – make sympathetic, crowd-pleasing noises as the earning gap between the Absolved and the employed increases exponentially.

Prevented from outright revolt by the bread and circuses of the mind-numbing quotidian, the Absolved have a non-specific sense of a past of purpose and direction which is fundamentally enervated, but sometimes roused from its torpor by populist sloganising.

The neo-Luddism of the government’s opposition, led by Tim Bradford, encourages Pavlovian responses in bite-sized chunks: ‘Death to the Machines! Turn Back the Hands of Time!’. The bar in which some of the central characters congregate – ‘Anodyne’, significantly – is overseen by television images of political demagogues preaching messianic discourses. Plus ça change.

Henri is an oncologist at a specialist medical centre run by a director called Serena whose cost-cutting agenda is pragmatic in appearance and ruthless in practice: doctors and researchers find themselves joining the ranks of the Absolved on an almost daily basis.

And families of patients strive over-officiously to keep loved ones alive in the face of near-terminal prognoses.

The character of Mr Toczauer, whose decline is charted throughout the narrative, is, in some respects, an embodiment of our crippling fear of death.

His extraordinary stoicism in response to his family’s blandishments does little to overturn the counter-intuitive irrationality of preferencing obscene, and probably pointless, levels of pain in the administering of chemotherapy, over the easeful narcotic of a suicide pill called Euthasol.

‘I just can’t, Doc. Save it for someone braver’, says the patient with the heaviest of unwitting irony.


Also by Steve Whitaker...
A Writer's Journey: Julia ChapmanAn Echo In The Wind: Date With Danger By Julia ChapmanPoem Of The Week: 'Race Riot, Tulsa, 1921' By Sharon OldsA Writer's Journey: Matson TaylorPoem Of The Week: 'The Wreck' By John Haines (1924-2011)
His decision is symptomatic of a system in crisis, creaking under the financial burden of unprecedented longevity: ‘modern medicine’, as Serena notes, ‘has brought about its own demise’.

Binder is at his very best at such moments. Arriving at contemporary commentary by indirect means; allowing the landscape of the mid twenty first century to unfold through, for example, a golf club’s membership fees is as taut a means of dissecting the human condition as any representational description.

That an eighteen-hole round is ten thousand dollars and membership a mere million is occasioned by a course irrigation surcharge enforced by out-of-control climate change and consequent water shortages.

The huge sums reinforce an invidiously unequal system for which golf clubs stand as elitist symbols. Binder, through Henri, is unsparingly cynical:

‘At each table lounge five to seven middle-age men, wattle-faced, in brightly colored, short-sleeved polo-shirts, ill-fitting pants, and visors. Each man has a cigar and a scotch. They don’t speak about but bellow on the usual topics – money, sports, and women’.

Synoptic short-hand for self-contained and self-serving existences, such moments, and they are many, identify fault-lines which fracture societies.

Think - and I try not to - Donald Trump. That Henri is invited into the world of the wattle-faced loungers is a stroke of good-fortune; it enables satirical digs at enclaves of the gross and the fortunate.

And the relentlessly superficial. Those who can afford it are implanted with ‘grams’ at an early age. An apotheosis of micro technologies, ‘grams’ yield hologram images of films and games and are advanced instruments of communication and financial exchange which blur the boundary between reality and fiction still further, and take attention-deficit banal to troubling lengths of immersion.

The evanescent figure of God – the residual emotional pull of supernatural reward and reckoning still persists – flits in and out of a narrative whose re-angled lens is obliged to accommodate ‘biblical’ climatic events in the form of lengthy droughts, and tectonic social changes which threaten the security of mental retreat.

The ‘gram’ is an opiate of retreat, a sequential extension of our own ubiquitous technology, and where it is not ministering to the credulous, it is underlining the potential for sardonic comedy of the phenomenon of virtual reality:

Comedy is, in fact, central to Binder’s landscape – the simulated judge presiding over a fiscal case with a one-dimensionally robotic sense of probity is both hilarious and absurdly plausible.

That Henri is an easy satirist does not remove his humour gland, and events, here, proceed in a strangely life-affirming direction involving the retrograde rejection of progress in favour of the meaningfully human.

Henri’s accidental embracing of the manipulative Bradford’s credo in prison – he has been framed by two of the latter’s acolytes – is both counter-intuitive and strangely reasonable, and precipitates a final, unlikely epiphany in an intuitive cynic.

Although it costs him his wife and son on route, he is redeemed.