‘You Have To Take Your Chances When You Can’: The Great Frost By Chris Speck 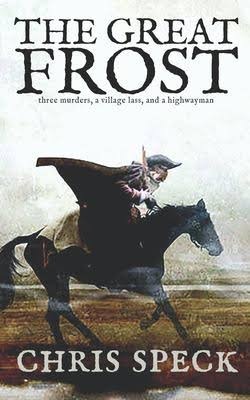 The ‘Great Frost’ was an extraordinarily cold winter in Europe in 1708–1709 when temperatures in England plummeted to -10C. It is said that, among many other phenomena, chicken combs froze solid and fell off, soil froze to a depth of a metre, livestock died frozen in barns, fish froze in rivers, game died in the fields, small birds died in their millions, the wheat crop failed, people went to bed and woke to find their nightcaps frozen to the bedstead and bread froze so hard it took an axe to cut it. And in the village of North Burton in the East Riding of Yorkshire, there were ‘three murders, a village lass and a highwayman’, not to mention a most unholy cleric who insisted the cold was a punishment for their sins, and a Captain who was not particularly bothered by the truth while intent on capturing the man he sought.

This latest novel by Chris Speck is a great yarn, with real villains and romanticised outlaws, plenty of action and a nucleus of believable characters with whom the reader becomes well acquainted. There’s Meg who lives with Nana and the boy, Richie. Her husband went off to fight in the campaign led by the Duke of Marlborough against Louis XIV of France four years before, and never returned. No one expects to see him again. Meg tends to the chickens and the pigs for Mr Pennyman, the local landowner, and try as she might to do the right thing, it appears that girls of her class, in her situation, will rarely be thanked, even when she risks her own life to save others.

Nana, ‘nasty as a raw wind…bitter as rhubarb’, has learned to use her ailments to her advantage and doesn’t make Meg’s life easy but ultimately, cares for her neighbours and lives her life through her daughter in law, Meg.


Chris Speck
Their neighbours are the Gambles, the Farthings, the Blackwoods and Farmer Thorne. Despite the inherence of a clear intra-familial hierarchy, they ‘all look out for each other or [they’d] all be dead’, so coal and wood is shared, as is meat, however rarely come by. A rabbit’s leg makes a tasty soup but there is no doubt that the hunger and the cold and the poverty are real.

The reader quickly allies with these characters and feels for their plight. There is sympathy for Meg who says ‘I don’t believe in love…it doesn’t fill your belly or keep the house warm. Duty, I understand’, as she toils daily to keep the little family together, knowing her place and doing what is right: ‘Bad jobs have to be done and it seems it’s Meg who has to do them.’

Life is complicated by the arrival, one night, of a badly wounded highwayman. Meg has learned from her mother ‘how to heal’, and they hide ‘The Robber’ and help him, despite the real danger he brings to their door. He also brings a hint of romance, at least in Meg’s dreams, to soften the reality of their hard existence. His former associates, Dandy Jim and Carlos, search for him and briefly turn Meg’s head, while her mother’s dying words give her strength: ‘there is a time to speak, a time to listen…time to speak and time to act’.

The real villains are not obvious, issuing thoughtless violence: a slap, a blow and much, much more, and the locals, knowing their place, are afraid. ‘Nobody has a thought for the first dead body…nor the second… they do not wish to be reminded of it’, while the local constable, Danny Reed, is ‘torn between duty and humanity’.


Also by Artis-Ann ...
Review: Her Last Promise By Kathryn Hughes‘So Many Dead In The Ashes’ : Dust Off The Bones by Paul HowarthMelody Of Peace: The Electric By Tim MurgatroydHe Knows I Know He Knows: Cradle Song By Robert EdricThe Best And The Absolute Worst: The Dressmaker’s Secret By Lorna Cook
The narrative wends its way relatively swiftly, with plenty of action. The celebratory village feast towards the end is an exciting event as the villagers put on their finery and Mrs Farthing, ‘in one of her wild moods…cannot decide which of her two pairs of stockings she should wear’, but the story has not reached its conclusion, with a chase and a desperate struggle still to come, until the final twist brings resolution.

I was drawn into this tale early on and became quickly absorbed; the historical detail of life in the early part of the eighteenth century lend it authenticity, allowing the reader to share the grim and precarious existence of the characters. Definitely recommended.


The Great Frost is published by Flat City Press