The last time I went to Bibis restaurant in Leeds was for Valentine’s Day around 4 years ago - it was heaving as you might expect. It is a very big room and the chatter was so loud you could hardly hear yourself speak. It was like being served on one big production line. 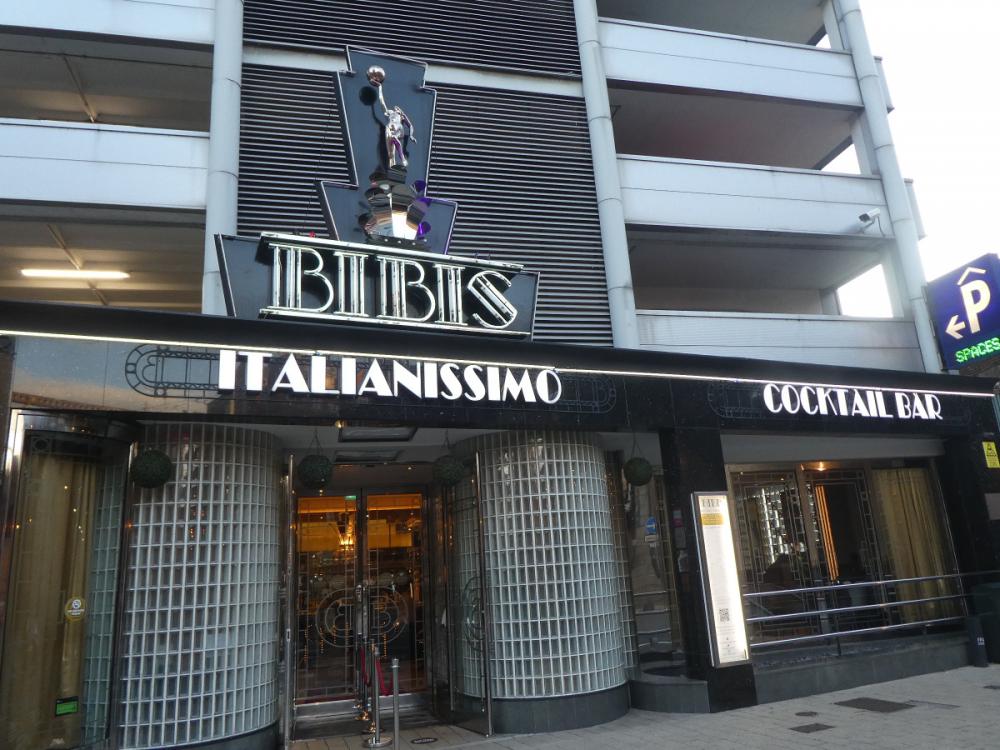 If there is one good thing to come out of the current pandemic is that you are not sat on top of each other in restaurants, it works even better at Bibis as they have plenty of room to distance you - and it is all the better for it.

One word springs to mind as soon as you enter the restaurant - Bling. It feels like you have travelled back to the 1920’s and it also reminded me of being in one of the speciality restaurants you can dine in on cruise ships with its ostentatious decoration. 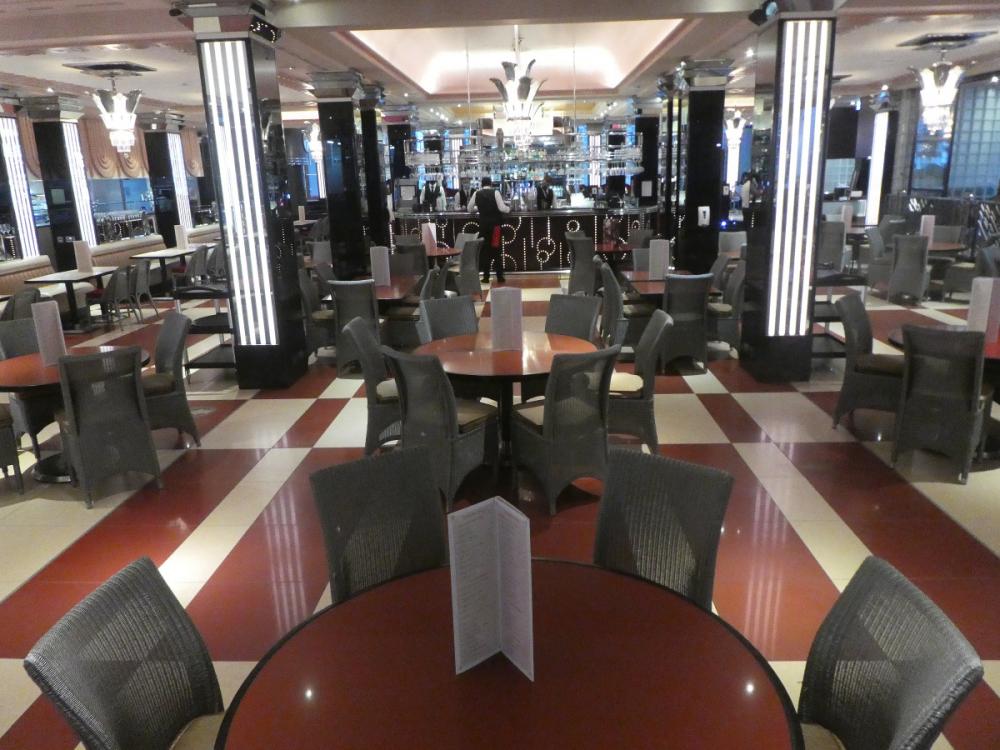 They have a dress code which is smart casual, but some of the men let their partners down by deciding to wear a pair of jeans. Men - if you are reading this and your lady decides to put on her best glittery dress and high heels, don’t let her down by wearing your jeans and as in one case I saw, a pair of trainers. Yes, I know a pair of designer trainers can cost the earth but come on, make an effort - she will thank you for it. 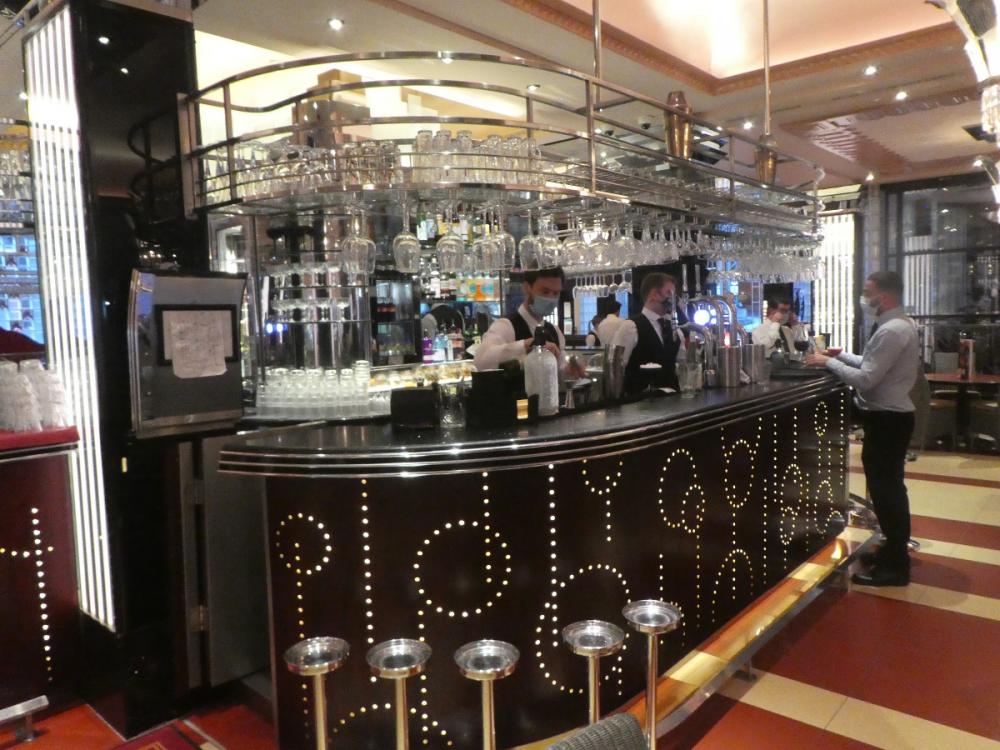 Cocktail bar
The stage was set literally as we ended sat up on the stage due to the distancing, but I didn’t mind as you could see the open kitchen, the cocktail bar and had a birds eye view of the restaurant floor - and a few of those younger men who thought they were going to McDonalds with their way too casual attire.

The menu gives a big choice and there are a lot of dishes that you would be unlikely to see on a menu in Italy, such as Venison, Grilled Calf’s Liver and Pork Belly with Black Pudding. In fact I wish you could get temptations like this in Italy. For some reason meat seems to be expensive in restaurants in Italy, that is if you can find a meat restaurant in the first place. Fish restaurants are aplenty and of course pizzerias (the best one was the mushroom pizzeria that served 17 different pizzas - all with different types of mushroom on them, I hate mushrooms - we left)

Back in Leeds though the restaurant was slowly filling up after our 6pm arrival. As it is a big place it needs more diners in to give it some atmosphere. The waiters are all from Italy which gives it an authentic feel. “I never knew there were so many Italians in Leeds” comments my chef friend who had accompanied me.

The diet cokes arrive with a slice of lime, which might be a minor detail but they are the ones that count sometimes. The crowd I have to say are mostly on the right side of 30 with a 60/40 split, the latter being the ones who have probably been coming to Bibi before some of our younger diners were born.

There is reason to come back though - the food is top notch, even my Chef friend thought that they had got everything right. 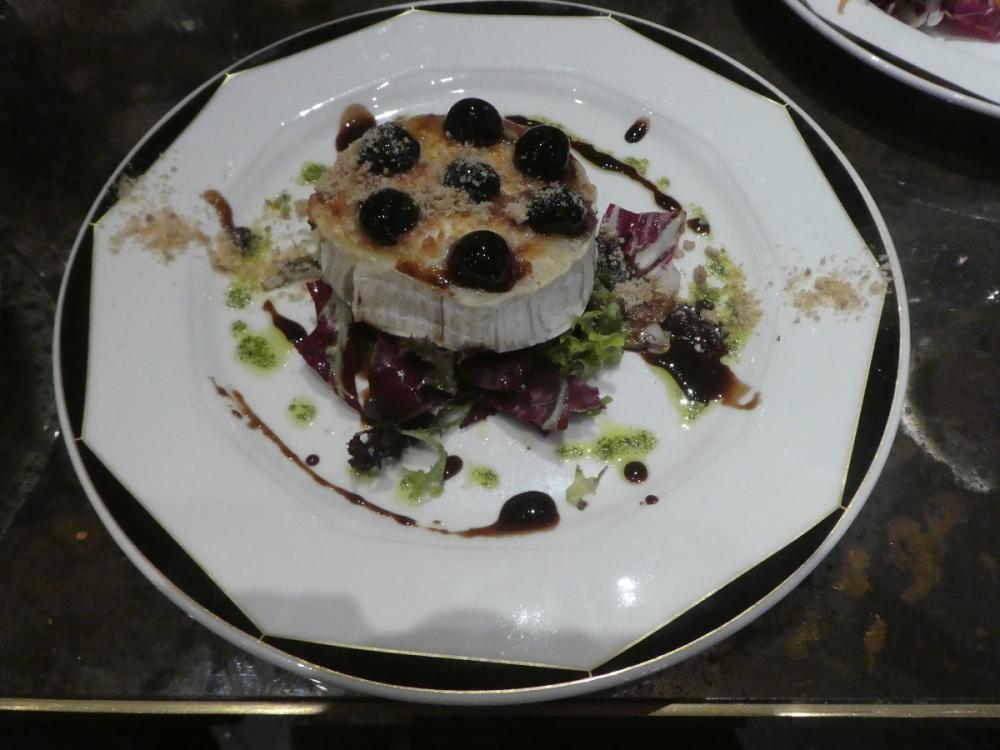 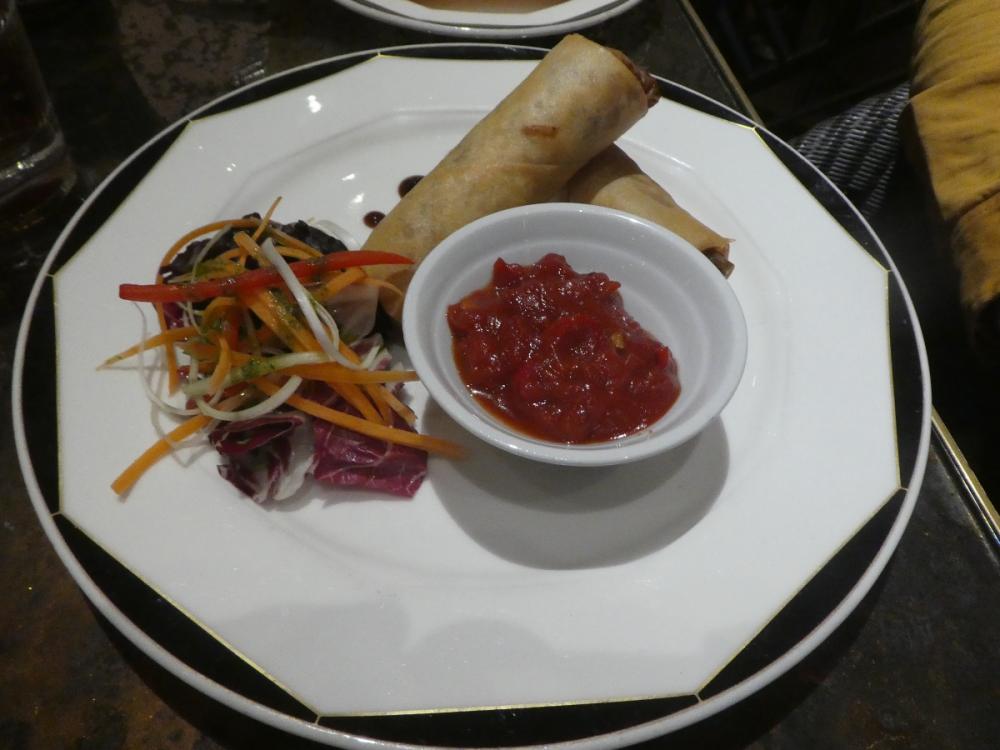 Duck spring rolls
I started off with Grilled goat's cheese with black cherry compote, biscuit crumbs and honey balsamic dressing. The cheese was a bit on the mild side for me but then I like my cheese strong. A good start.

My friend went for the slow cooked Duck spring rolls. Some of the best he has tasted apparently. Things are looking good (apart from the men wearing the jeans).

The Venison haunch steak (cooked pink) with Sloe gin and blackberry jus, served with skin on fries is something that for me is an acquired taste, but my chef friend tells me they have presented the dish perfectly and full marks for the cooking.

I decided on the more traditional Pizza Americana, which came with double Italian sausage and jalapeños. Yes it was hot, so hot you will be sucking that slice of lime in your Diet Coke, to cool you down. 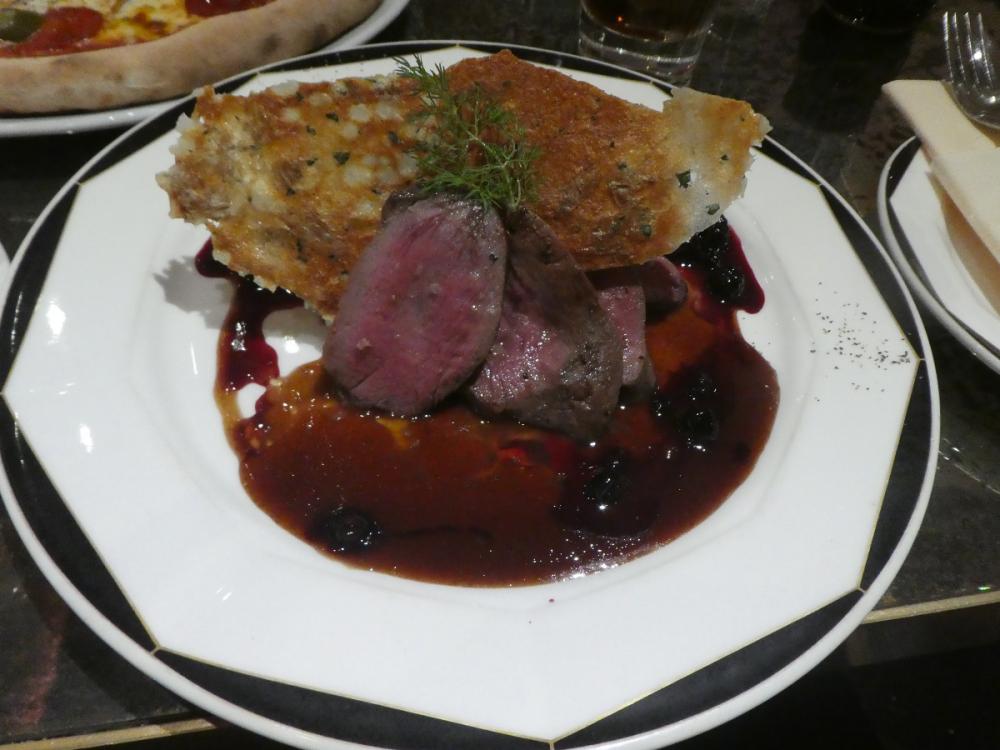 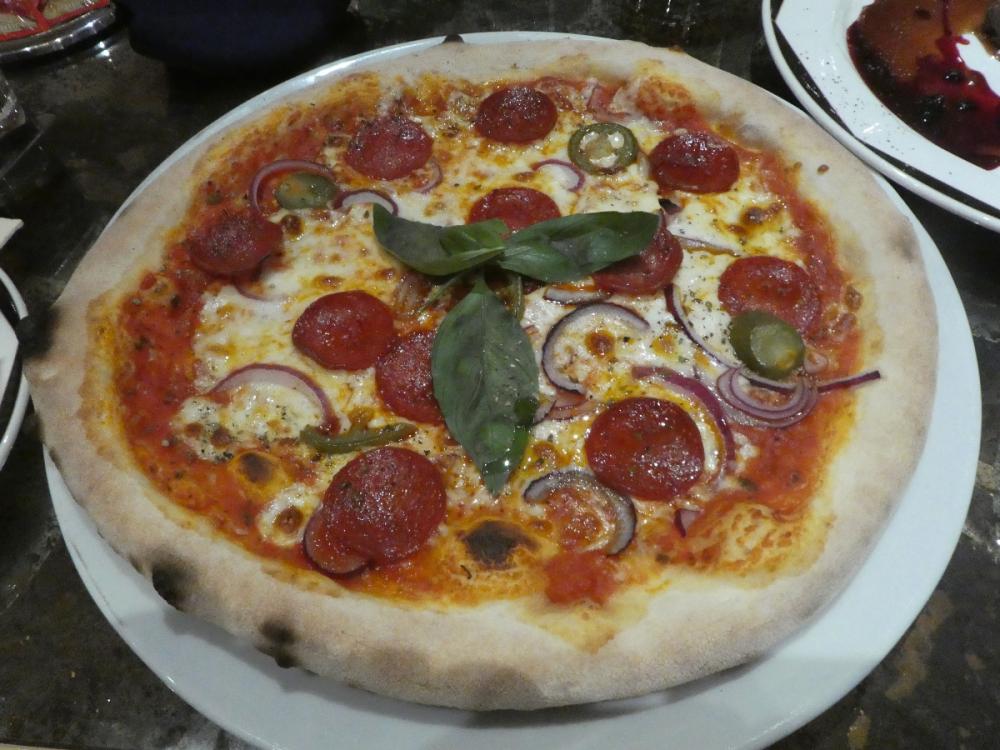 Pizza Americana
By now the live music has started, the 3 piece do a few jazzy covers and then slip in Love Me Tender. After an absence for me of live music for six months, it was good to hear live music again.

Desserts are served including for me the Coppa De Gelato Bibis with fresh strawberries, Morello strawberries, whipped cream and strawberry ice cream. Close my eyes and I could be at a pavement cafe in Verona.

My friend went for the Tiramisu Classico. Yes, it was fantastico according to him. The 3 piece by now are having an interval, the guests keep arriving and even though the tables and customers are socially distanced, the atmosphere is buzzing. 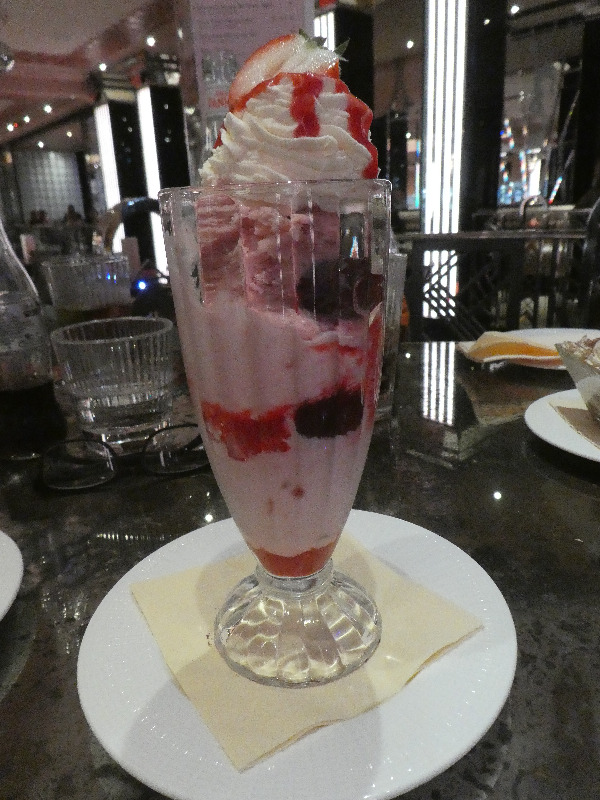 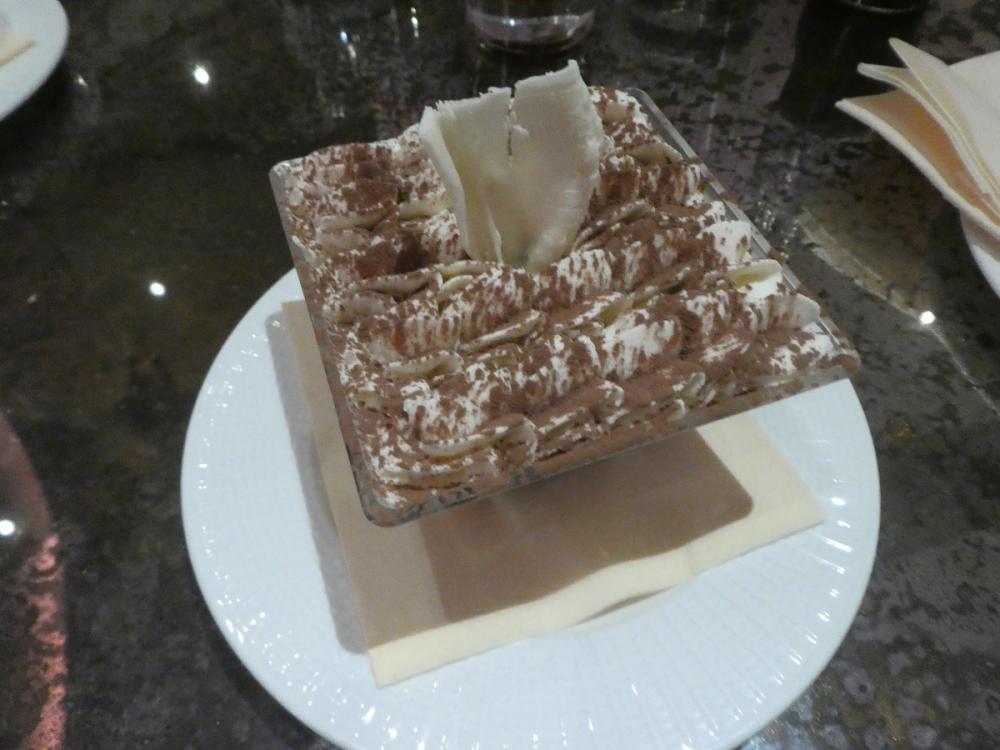 Tiramisu Classico
It is a good time to go now, as you have the space but still receive attentive service and depending on which night you go, live music.

As we are about to leave, we follow the one way system around the restaurant to the exit, the smell of freshly cooked food wafts across from the kitchen and the band are about to play again. I am looking forward to returning for the encore.