An Audience With The Devil - A Hall Of Mirrors Story 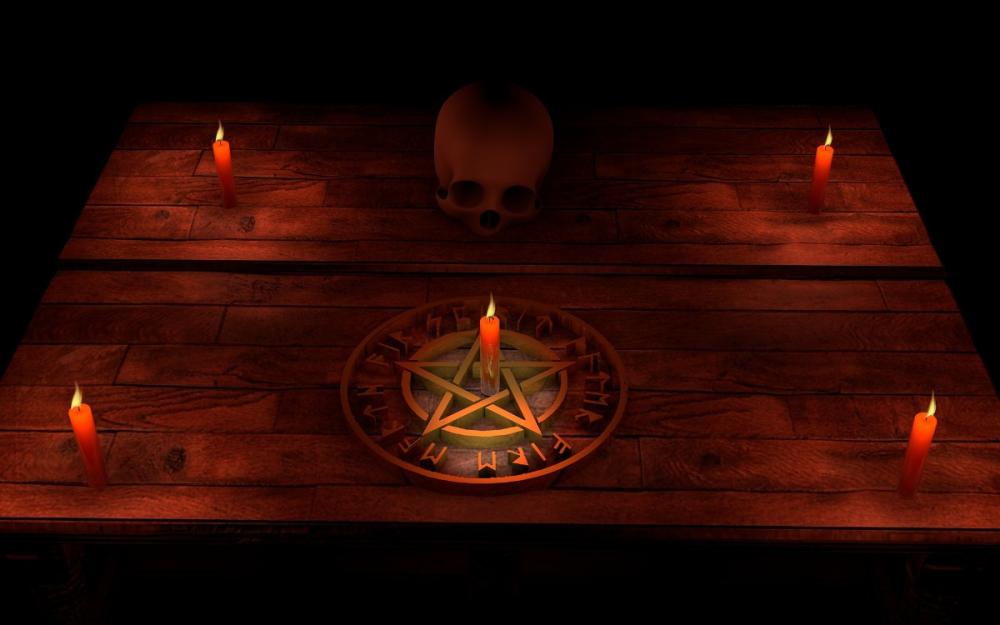 He might well fail to recall the litany of lies he habitually spouted with supercilious sobriety in The House of Commons, however the shibboleths of satanism ran through him like a seaside resort’s name through a stick of pinstriped rock. His epicene eyelashes fluttered ecstatically as Nanny’s rank breath mixed with the fetid stench of his own. He shivered and began to sweat profusely as the chant left the serpentine slit in his angular face doing service for a mouth …

“Eisheth , High Priestess of the Black Sun hear my adoring words… A te disfrenasi Il verso ardito, Te invoco, O Satana Re del convito. In the name of Amdusias, Haagenti and all powerful Oriax I compel thee to bid me access to the chamber of Phalarthao…Esbat must be done !”

Nanny, his loyal familiar, emitted a series of modulated snarls by way of a basso continuo backgrounding Jacob’s orgasmic grunts. The moment was brief but satisfying. Nanny’s vast wings enfolded themselves into her arched back as she withdrew her claw from Jacob’s clammy hands. A thunderclap rumbled distantly as rain began to pelt the sash window’s frail glass.

A sulphuric aroma clung to the room’s dank air, its opulence at variance with the ugly entities occupying it. Nanny stroked Jacob’s damp hair, smoothing his parting and gluing his fringe to his scalp careful not to dislodge his horn-rimmed spectacles.

Rising from his knees, Jacob took the pulsating totem from Nanny’s scabrous, blood-drenched palm and entered the shrine. Closing the heavy Georgian door behind him, he drew the purple velvet curtains and began to light the candles edging the pentagram scrawled in chalk upon the chamber’s polished oak floorboards. The fireplace erupted into a noisy blue conflagration before being extinguished by a gust of gelid wind carrying the fetid scent of diseased corpses upon its angry blast.

Jacob must first shed his mortal attire. He removed his Dries Van Noton chalk stripe suit and then discarded his Old Etonian striped tie, before unbuttoning his perfectly starched, white Turnbull & Asser shirt. He placed his pristine black Oxford’s to one side, lovingly installing the shoe trees guaranteed to keep them as stiff as his upper lip. Lastly, he slid out of his silk lingerie careful not to catch his nipple clamps, or chastity cage.

Now fully naked, his body looked rather like a heavily tattooed, underfed tape worm. Every inch of baby-smooth skin save for that visible when fully clothed, was covered in the demonic insignia of his infernal credo. The Sigil of Bathomet adorned the reed-thin expanse of his back. Aleister Crowley’s Chaos symbol claimed dominion over his birdlike chest, augmented with The Black Sun, Circled Dot and the Eye of Providence. His slender, twig-like legs were an unreadable tablet of Latin phrases, all set upon a sea of skulls with hideous serpents twisting through their heavily shadowed eye sockets.

Our foul necromancer admired the artfully rendered Orborus entwining itself over his skeletal left arm and turned his venal attention to the Monas Hieroglyphic garlanding his puny right arm like green mould on a forgotten slice of white bread. The numerals 666 ran across his buttocks, only to be seen by those within the Sabbat’s most intimate inner circle.

The leather paddle had left a painful welt as a souvenir of his attendance at the St Eichatadt gathering. He’d drunk deep from the inscribed pewter chalice and often recalled the taste of the metallic elixir afforded by the blood offering. A low-ranking civil servant had been sacrificed in the name of Rashoon and would not be missed.

He had Spurned the teachings of Charles Babbage, becoming a devotee of The Beast himself, Crowley. Dropping to his knees, arms extended in a dominical perversion of the Vitruvian Man, Jacob’s polished vowels and carefully enunciated consonants began their stygian song ….

“ I invoke Thee, Terrible Invisible God who dwelleth in the Void Place of Spirit !”

Opening his now coal black eyes, sage green flames danced before him with the manic urgency of Nadine Dorries elbowing her way to the bar before last orders. The thunderclap shook the room, its malefic energy reminiscent of Priti Patel manically smashing a council flat’s door in as she led a pack of braying myrmidons in search of an illegal immigrant.

The temperature in the grave-silent chamber plummeted, its arctic chill marginally warmer than that of Patel’s gelid heart. A putrid stench enveloped the room, reminding Jacob of the time he dined with Michael Gove and caught a whiff of his body odour. Gove had considerately broken wind in order to fragrance the spoilt air, thereby allowing Jacob’s guests to breathe without retching. Jacob had sat at the far end of the enormous dining table, seating Gove with the same sense of self-preservation Putin exhibited when meeting foreign dignitaries.

Jacob rose steadily like a cobra gracefully rearing up when faced by a plucky mongoose. His tongue flicked fluidly from side to side, and a drop of concentrated acid fell upon the uncarpeted floor, causing the wood it befouled to instantly burn to ash. He’d assiduously acquired the ability to stem such an inconvenient flow when appearing before television cameras, though his duplicitous words still contained the iniquitous poison oiling them. He especially struggled to articulate the words ‘Universal Credit’ without becoming a condescending fire hazard.

He slithered like a bipedal snake towards the portrait, hidden from view behind thick curtains fabricated from the trimmings taken from Michael Fabricant’s interesting hair. If the ritual had been successful, his Master would be revealed, and the communion could commence. Wisps of grey smoke escaped from behind these ghastly drapes, heading for the chamber’s ornately vaulted ceiling with the lethargic passivity with which Dominic Raab greeted criticism, or unwelcome fact. Like Raab’s disingenuous words, these ambassadors of Hell would soon evaporate and become insubstantial homages to pure evil.

Jacob took a deep breath and clenched his withered scrotum with the spider-like fingers of his left hand. With is right hand, he tentatively withdrew the curtain and prepared to welcome the smiling, anodyne face of The Bloated One. A thunderclap roared like an enraged Kraken suddenly released from its shackles and intent upon brutal retribution…

Boris’s puffy visage beamed from the screen …“By the ancient Gods, old bean, and the sacredly venerated beard of Pericles, can’t you just do Zoom like everyone else !”
Also by Paul Spalding-Mulcock...
A Sower In The Desert: Smoke By Ivan Turgenev (1818-1883)“Love Is The Magician That Pulls Man Out Of His Own Hat”: A Marvellous Light By Freya MarskeExpecto Resurrectionem Mortuorum:The Gift - Book 1, Eleanor, by R. A. WilliamsLittle Liar Boy - A Hall Of Mirrors StoryThe Devil's In The Detail: Johannes Cabal The Necromancer by Jonathan L. Howard
Next Episode