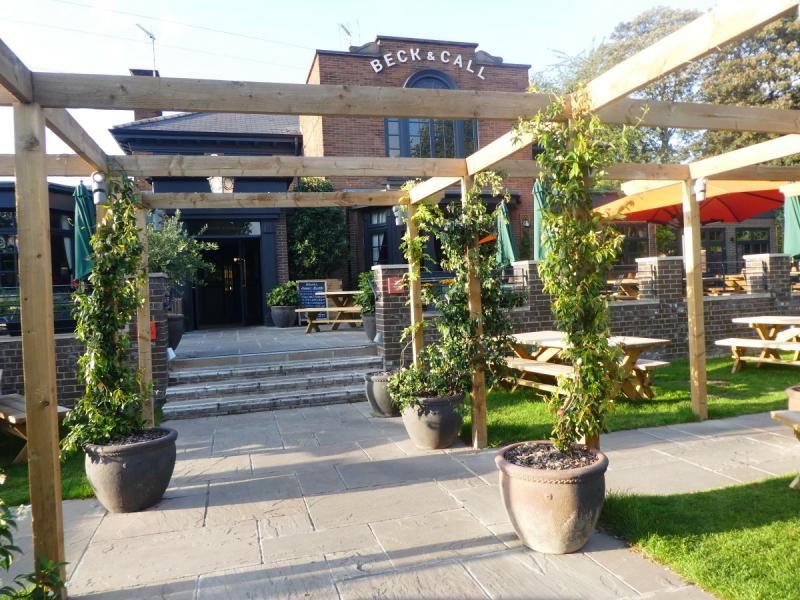 There are some phrases which irritate me, a current one is "It is what it is". I try not to say it otherwise I'm just like those that get my back up. Talking of getting my back up it took a while to find the newly opened Beck and Call in Meanwood in north Leeds. Thanks to Google Maps and asking passers by we got there in the end.

Formerly the True Britton this large pub opened in its new guise as Beck and Call earlier this summer. Owned by the same team who run Water Lane Boathouse, Belgrave Music Hall and Headrow House in Leeds, they have given the place a whole new lease of life catering for families, friends and sports fans.

First impressions from outside are good. It is an enormous place and they have made good use of the outside area with plenty of outdoor seating - perfect for summer days. There is also an abundance of play areas for youngsters. 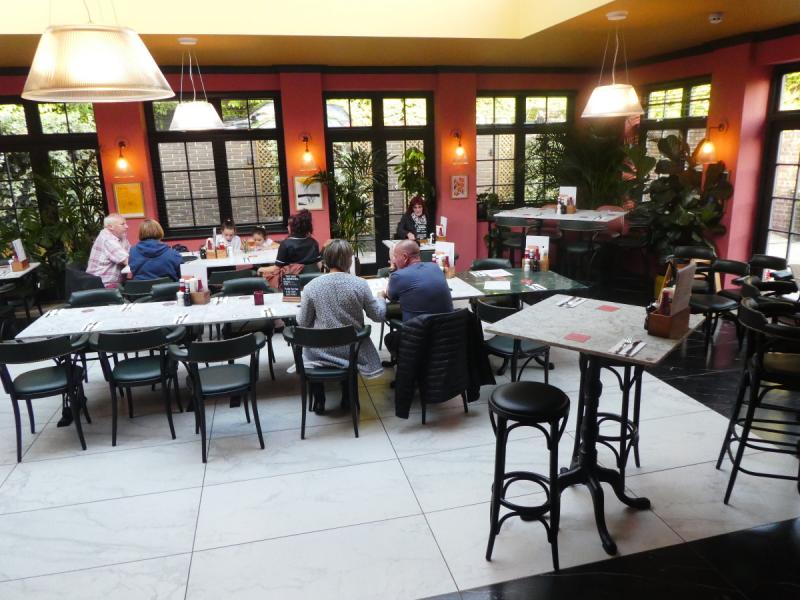 The Orangery
Inside, with it being so big they have been able to tailor certain sections; so depending on your mood you have the sports bar area with the large TV screens, the drawing room with the long sofas for a coffee and a chat, a general eating area and then an Orangery that has a Mediterranean theme with pastel colours and leafy palms.


Also by Graham Clark...
Turtle Bay Delivers A Taste Of The Caribbean In LeedsPopworld Is Coming To LeedsThe Winner Takes It All - Bjorn Again Are Coming To York RacecourseNot An Illusion - Leee John Is Coming To LeedsPAZZA Arrives In Leeds
They have weekly deals such as a Pie and a Pint for £10 on a Monday and kids eat free too from 4pm to 7pm on a Monday. Tuesday night you can have a second Fish and Chips for £1 when the first is bought full price. Thursday night is Burger Night with buy one get a second for £1. We visited on a Thursday night and the place was heaving - we had a table reserved thankfully as all the other tables were taken.

You order your food at the bar and give your table number. "It's just like Sizzlers" observes my partner. We later discovered that the pub used to be a Sizzlers though my partner didn't know that. Actually that's where the comparisons stop - it feels more upmarket and the food is excellent.

The menu is extensively locally sourced pub grub curated by Ben Davy, who is the Food Development Chef for the group, so you can expect Steak and Ale pie, Pork chops, Fish and chips, a Vegan sausage and mash, Steak and chips and Sunday roast, including bottomless gravy.

My partner's Fish cakes - a mix of salmon, smoked haddock, parsley and cheddar was a copious serving and could have been a main rather than a starter. Portion sizes are very generous on starters, mains and puddings.


Fish cakes
My main of Steak and Ale Pie had tender slow braised Yorkshire Beef in a thick Ale gravy encased in a shortcrust pastry served with chips, even more gravy and greens. There was a slightly perfumed taste to the pie though it was a delight. Priced at £11.50 it was not too heavy either.

My partner chose the Aged Pork chop served with bubble and squeak, fried egg and gravy. The tender chop was perfectly priced at £8.95.


Steak and Ale Pie
The Vanilla cheesecake must be good - they had sold out of it. Instead the Apple Pie served with clotted cream was totally scrumptious - though it might not be sweet enough if you have a sweet tooth. My partner's Knickerbocker Glory for me was too chocolatey, but she enjoyed it.

There is the potential there for making the Orangery area table service perhaps on a Sunday which would give it an edge. The refurbishment has turned the place into something special.


Apple Pie
In a nutshell - it is what it is. I never thought I would use that phrase but it is a good indication of what to expect. It is clean and because it is relatively new none of the seats are dirty with spilled food on them. The food is good, though I would ditch the starters and go straight to the mains and avoid Thursday night unless you want a burger when they seem to be at everyone's Beck and Call!