Christians celebrate Holy Week and Easter to mark the most significant event in human history: the life, the death, burial and resurrection of Jesus Christ.

Easter comes from the Greek/Latin word Pascha or Resurrection Sunday which is a festival and holiday (or Holy day) to celebrate the resurrection of Jesus from the dead.

This event is recorded in the New Testament and happened on the third day after Jesus was crucified, on the day we now call Good Friday.

Because the Church calendar follows the moon, Easter Day can be on any Sunday from March 22nd to April 25th!

Many Christians go to Sunrise services held early in the morning to celebrate the start of Easter Day and remember that Jesus rose from the dead on Easter Day.

Churches are filled with flowers on Easter Day and some churches have candles which help Christians to remember that Jesus is the light of the world and that when he rose to life on Easter Day overcoming the darkness of evil.

How is it that the cross of Good Friday has become the universal symbol of Christianity?

On Good Friday Christians remember that Jesus died for everyone. He was crucified by the Romans on a hill outside Jerusalem even though he hadn't done anything wrong.

In AD 325 Constantine issued a decree at the Council of Nicaea, that the Cross would be the official symbol of Christianity. This was after he converted to Christianity and abolished crucifixion as a punishment.

The cross is one of the earliest and most widely used Christian symbols reminding people of the crucifixion of Jesus Christ. It has now become a symbol for Christians everywhere.

The history of the Easter egg

The association of Easter with eggs is so ancient that no one knows its origin. But eggs are a symbol of new life and Easter Sunday is the day that Jesus rose from the dead. This miracle showed that life could win over death.

In the UK before the introduction of chocolate eggs, eggs were hard boiled and dyed with various colours and patterns.

Christians of the Eastern Orthodox Churches still practice this today, often favouring red because it is the colour of life-blood. Christians who fasted during Lent, the weeks leading up to Easter, did not eat eggs during that time, so there were plenty spare.

Chocolate eggs are said to have originated in France and Germany in the early 19th century but here in the UK it was J. S. Fry & Sons Limited who produced the first chocolate egg in 1873.

Today people give each other chocolate eggs and in the UK children often go hunting for chocolate Easter eggs hidden in the home or garden supposedly by the 'Easter bunny'.

For Christians the egg is a symbol of Jesus' resurrection and cracking open the egg is a sign of the empty tomb. It is also a sign of new life as chicks hatch out of eggs.

Why rabbits, lambs and the Easter bunny?

The story of the Easter Bunny is thought to have become common in the 19th Century. Its origin can be traced back to 13th Century, pre-Christian Germany, when people worshiped several gods and goddesses, specifically the festival of Eostre - a goddess of fertility whose animal symbol was a bunny.

According to some sources, the Easter bunny first arrived in America in the 1700s with German immigrants who settled in Pennsylvania and transported their tradition of an egg-laying hare. 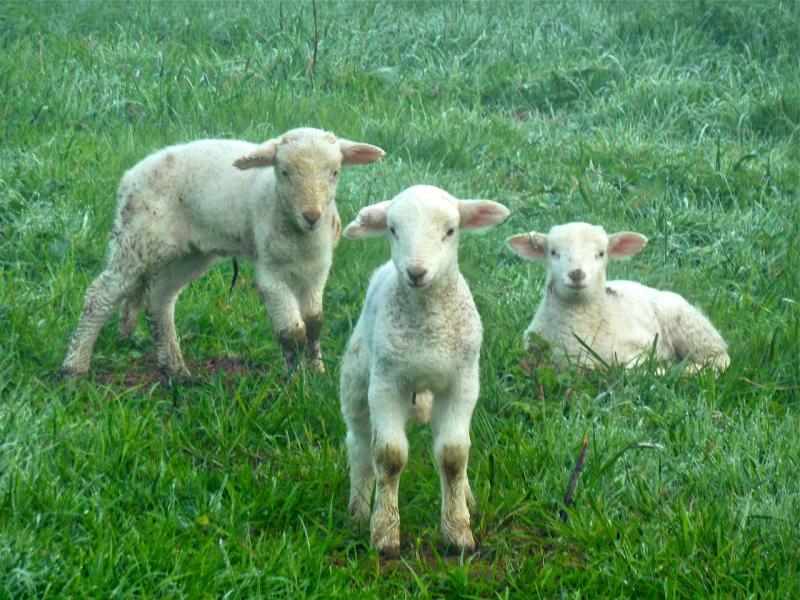 Rabbits and lambs have been associated with springtime and new life since ancient times. This is possibly because most baby rabbits and lambs are born in the spring around Easter.

The Bible refers to Jesus as 'the Lamb of God'. This is because lambs were used in the Jewish faith as a sacrifice for people's sins and wrong doings. Christians believe that Jesus became the sacrificial lamb for everyone.

So this year Easter will be very strange for everyone because of the coronavirus pandemic and all of us having to #StayHome to #SaveTheNHS. But however you celebrate Happy Easter to everyone!