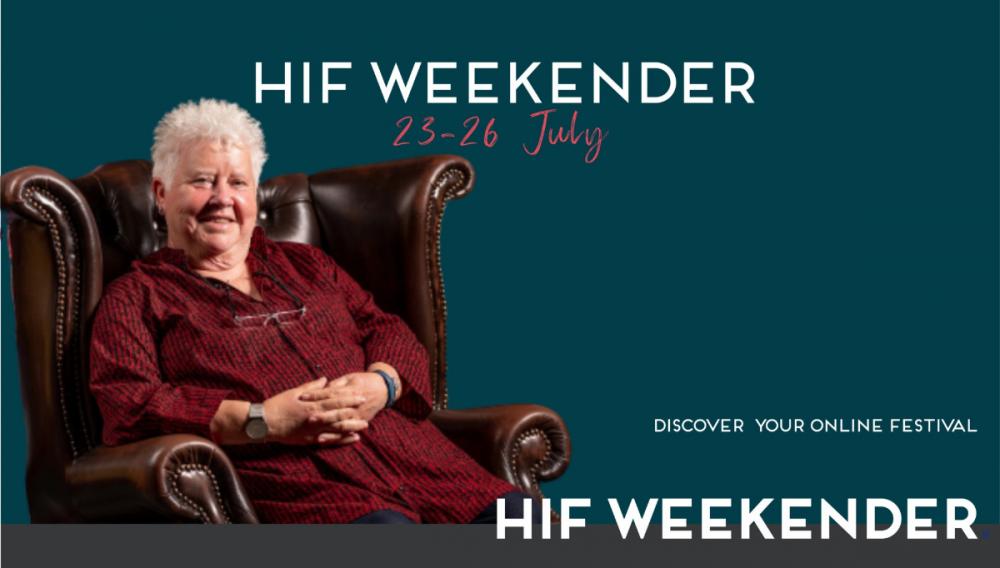 Val McDermid
The ‘HIF Weekender’ 23-25 July, is a free virtual festival bringing world-class culture to everyone at home. A celebration of the arts, the weekend features performances and interviews with internationally acclaimed musicians, best-selling authors and innovative thinkers to coincide with what would have been the legendary long weekend of Harrogate’s Theakston Old Peculier Crime Writing Festival.

After having to cancel and refund over 80 events in July alone, and in monetary terms having lost over £800k of income since March, it would have been easy for HIF to shut up shop for the season; instead, the entrepreneurial spirit of the festival team kicked in and they created HIF Player to live stream events and to access audio and video recordings from the archives.

Chief Executive, Sharon Canavar said: “We have managed to bottle up the festival into one big weekend of digital activity celebrating our favourite musicians, authors and speakers and commissioned a new work from Dr David Lancaster, which will premiere as part of the weekend with musicians young and old from across the world.”

Crime Writing’s most wanted accolade, the Theakston Old Peculier Crime Novel Of The Year Award returns to highlight the cream of the crop, celebrating excellence, originality, and the very best in crime fiction from UK and Irish authors over the last year. A highlight in the literary calendar, this year’s events will be streamed online in its usual spot on the Thursday evening of what would have been the biggest crime fiction weekend of the year.

The world premiere of ECLIPSE live streamed on Friday 24 July at 6 pm. Commissioned by HIF and composed by internationally renowned Yorkshire based composer Dr David Lancaster, it is scored for brass band and was written in just 5 days during the beginnings of lockdown. For this performance HIF has invited all brass players, young and old, novice and professional, from all over the world, to be a part of this virtual performance and the online world premiere.

Ian Rankin, who was set to be the 2020 Theakston Old Peculier Crime Writing Festival Programming Chair, sits down with N. J. Cooper to reflect on his lost programming chair year. The pair also dig into Ian’s upcoming novel A Song for the Dark Times, the next of the Inspector Rebus books.

The harpsichord may not be to everyone’s liking, but after seeing Mahan Esfahani perform at the York Early Music Festival in 2015, I’m very much looking forward to this recital. As the only harpsichordist to be a BBC New Generation Artist, he has an infectious enthusiasm for this instrument.

Adam Rutherford: How to Argue With A Racist

Racism is real, despite race having no scientific basis. But in a time of fake news and divided politics, the appeal for science to strength racist ideology is on the rise. Scientist Adam Rutherford makes the case against race and using fake science to justify prejudicial politics.

An Interview With John Suchet

ClassicFM powerhouse John Suchet presents his Sunday Times bestselling book Beethoven: The Man Revealed, revised and updated for the 250th anniversary of Beethoven’s birth. Despite being considered as one of the greatest composers of all time and a crucial figure in the transition between the classical and romantic eras, little is known about the man behind the music. Suchet delves into this complex character, bringing him faithfully and vividly to life.

Firmly established as a leading international violinist, Tasmin Little is a firm festival favourite. First appearing in Harrogate in 1998, Tasmin revisited in 2002 and 2004. Tasmin has performed on every continent and her multi-award winning and varied career encompasses international concerto and recital performances, master classes, workshops and community outreach work.

After announcing her retirement in January 2019, this performance marks one of her last.