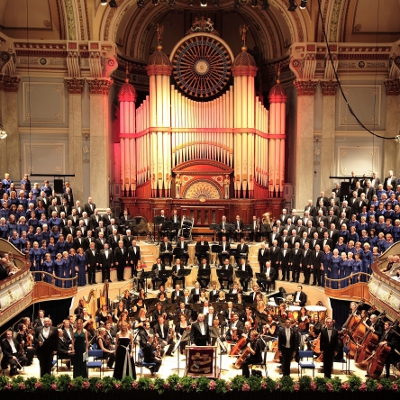 Huddersfield Choral Society
Huddersfield Town Hall’s 2019/20 season climbed straight into devotional fourth gear with a richly contrasting programme of music on Friday evening. The Choral Society’s autumn performance in this acoustically-rich and opulent setting was accompanied by the Hallé Orchestra and a gifted quartet of guest solo voices. 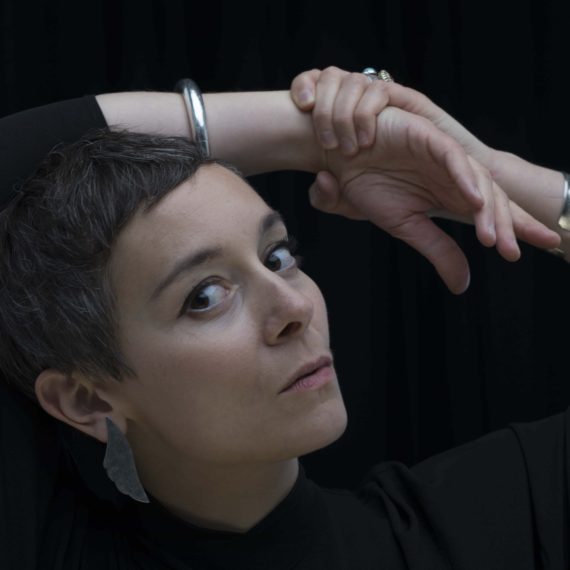 Anna Dennis
Refreshing that the programme commenced with an outing for a rarely heard Britten Cantata – the St Nicolas – which was commissioned in 1948 for the centenary celebrations of Lancing College in Sussex, and is tempered with an easy and melodious accessibility. As profoundly inclusive as other examples of Britten’s work, the piece was written with school choirs in mind and on Friday took full advantage of audience participation in the two established hymns which acted first as celebrant, and then as coda, to the life of Nicolas. A happy underwriting, too, of the contribution of the Choral Society’s youth section, who, from behind us in the Circle, added a gorgeous and multi-layered effect of displacement to the panorama of sound.

The progress of St Nicolas’ life was delivered with an ad hoc and eclectic gusto in passages, the whole underpinned by Britten’s extraordinary combination of originality and stylistic derivation. The skilled exchange between the massed ranks of the HCS and rapidly alternating orchestral sections yielded an odd satisfaction which dissolved any musical seams dividing the saint’s life and apotheosis. This phenomenon was never better reflected than in a narcotic and minimal piano-vocal harmony, which gave up a moment of quietude in the maelstrom of orchestral fanfare. Renowned tenor Joshua Ellicott’s vigorous exposition as Nicolas was empowering to the extent that it described a febrile emotional journey with operatic force. 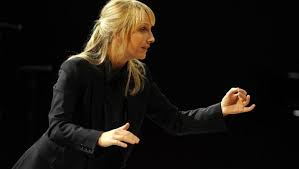 Sofi Jeannin
Overseeing her role with an instinctive verve and precision, Swedish-born conductor of the BBC Singers, Sofi Jeannin, was in electric form. Her post-interval supervision of one of the most celebrated of all of Mozart’s oeuvre, the Mass in C Minor, welcomed on stage two guest sopranos – Anna Dennis and Yorkshire-born Rowan Pierce – who led the line in powerful, but radically distinct fashion. The acclaimed Dennis’ vocal versatility is astonishing; her extraordinarily wide-ranging skills no doubt finely tuned in a career which has embraced many musical genres, she gave a performance of both exquisite subtlety and breathtaking authority.

No strangers, over many decades of performance, to Mozart’s Mass, the Choral Society exceeded expectation throughout the piece with a tightly organised and affecting rendition, from the intense repeated invocations of the Kyrie to the final triumphal hymning of the Benedictus.

A spirited, and inspiriting, performance, we look forward, once again, to the return of the Messiah in December, if only in musical incarnation.


Also by Steve Whitaker...
Poem Of The Week: The Wireless By Jean StevensBurned By Light: Dovetailing - Gathered NotesNight Swimming:Towards A General Theory Of Love By Clare ShawPoem of the Week: 'Together' By Robert GibsonReview: Voices of Craven's Summer Jubilee Concert in Skipton