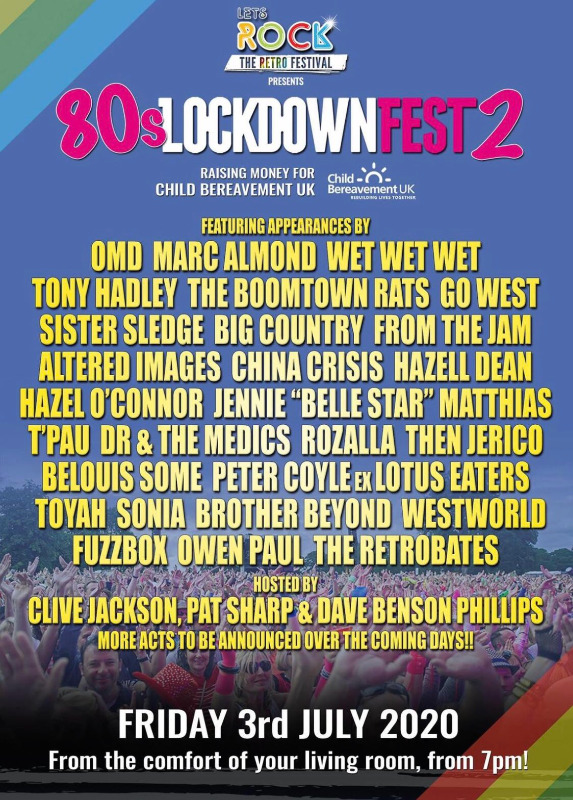 The first 80s LockdownFest took place on May 16th 2020, which would been the start of the Let’s Rock summer festival season, drawing an estimated audience of more than 3 millionand raising over £140,000 for Let’s Rock’s official charity partner Child Bereavement UK.

The online event – which featured live-at-home sets from Let’s Rock stars including Tony Hadley, Wet Wet Wet, ABC, Jools Holland, Howard Jones, Midge Ure, and Jason Donovan - was livestreamed on YouTube and was trending at No.2 during the evening, above Britain’s Got Talent and just below Eurovision 2020: Europe Shine A Light.

80s LockdownFest2 will be hosted by Pat Sharp and Dave Benson Phillips and the fun kicks off at 7:00pm on YouTube and across all the Let’s Rock locations’ Facebook pages.


Also by Graham Clark...
Interview With FiveGary Barlow Relights The Fire In SheffieldThe Offspring Let The Good Times Roll In LeedsJames - Still Getting Away With It At Leeds ArenaSam Fender – On Fire In Leeds
Say Let’s Rock organisers UK Live;
“We were humbled by the generosity shown by our audience in raising over £140,000 for Child Bereavement UK during LockdownFest. We put the event together because we aren’t able to raise funds for the charity at our festivals this year, and because we felt we all needed a bit of a pick me up. Listening to our Let’s Rock audience we felt strongly that we had to try and do just one more - and the timing for the second event is just perfect with the official lockdown being phased out. We hope you all enjoy 80s Lockdownfest 2 and cannot wait to be back next year, bigger and better!

“This year really has proved that Let’s Rock is a family and so, finally we’d like to say a huge thankyou to the Let’s Rock family for the incredible loyalty and understanding you’ve shown us during these exceptional times. We all deserve one hell of a party next summer!”

With the Let's Rock festivals being postponed this summer, the new dates for summer 2021 in the north are as follows: