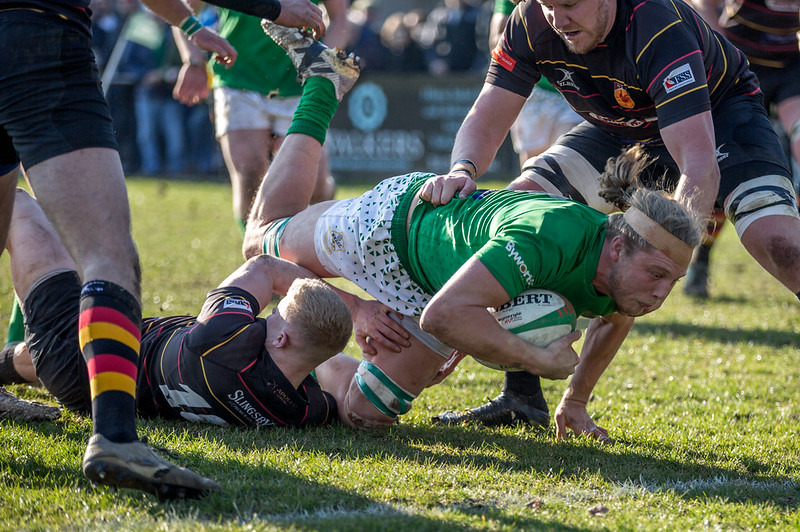 Ryan Carlson Scores 'Dale's 1st try - photo Ro Burridge
Harrogate nearly clung on for their fourth win of the season but Tom Davidson landed a last gap penalty to take the spoils. This was a good local derby; if the skill level at times was lacking, the match was high on tension and the result was always in doubt.

The teams ran on to the pitch through a tunnel provided by Wharfedale and Harrogate U13 teams who had provided an entertaining match on the back pitch. Wharfedale started brightly with good carries from the forwards moving play out of Dale’s 22. Bradley Viner followed up Henry Macnab’s kick and forced a penalty at the break down. Tom Davidson opened the scoring after 2 minutes with the penalty.

Both teams had unsuccessful shots at goal and a scrappy game was generally played in midfield. After a sustained period of pressure from Harrogate, who went through 23 phases in Dale’s 22 without reaching the line. The Green wall held and the big Harrogate forwards could not break through. Most of the phases were within 5 metres of the try line and it was a great effort by all Green players to hold the line with Jack Pinder eventually winning a turn over penalty with a superb jackle.

Dale worked their way down the pitch. One effort was held up over the line but Dale pressed again and were putting together some good rugby with all players contributing. One of the main problems during this period was the line-out with Harrogate competing on Dale’s throw, or the ball missing the target. Harrogate had a defensive line-out on their own 5-metre line. They won the ball but Josh Burridge stripped the ball and got the ball to Stevie Graham who fed Ryan Carlson, who barged over to score. Davidson added the extras. 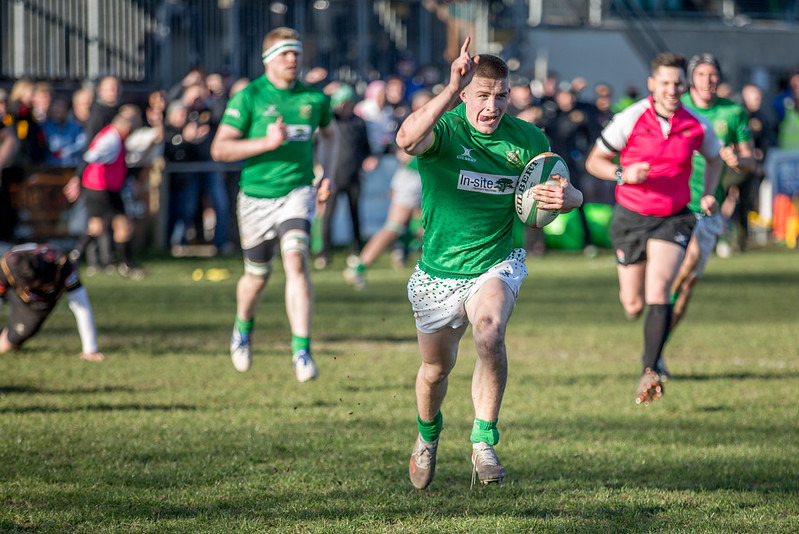 Henry McNab Scores the 2nd - photo Ro Burridge
Rory Macnab grabbed a try before half time and he also added the conversion to narrow the gap to three points at half-time.

Wharfedale were guilty of squandering possession early in the second half. This allowed Harrogate to have some possession and some territorial advantage.

Gate eventually had an attacking line-out and their driving maul did enough to get Jonny Coser over the line. Dale carried on being careless with the ball and again Harrogate pressed into Dale`s territory. A grubber kick through bounced very kindly for Harrogate and led to Campbell Swanson touching down. Macnab converted both tries.

It was now Harrogate who were making mistakes and led to a penalty in front of the posts for Davidson to bring Dale back into the game.

The match was officiated really well, the only moment of controversy being when Davidson launched a kick which looked to everyone that it was a successful 50-22 kick giving Dale the line-out. It was adjudged to be outside the 22 and Harrogate had the ball. It was a joy however to note that the match was well refereed. 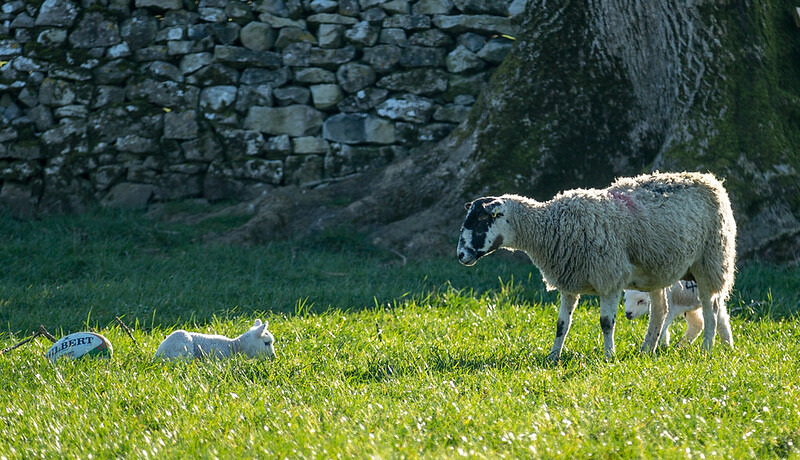 Can we have our ball back? - photo Ro Burridge
Harrogate won the ensuing line-out and put a kick down field. The Wharfedale forwards drove the ball forwards setting up good possession in midfield. Then the ball was moved right through Davidson, Johnny Moore and Harry Bullough. Carlson carried the attack on and slipped the ball to Rian Hamilton. Despite being tackled by two players Hamilton offloaded to Henry Macnab who ran in under the posts. Davidson’s conversion brought the score to 20-21.

Davidson had two more chances to take Dale into the lead but pushed both efforts past the post. Wharfedale won a penalty right at the end of the game but Davidson had to wait a long time before taking the kick as the medical team attended to Henry Macnab who sustained a serious injury. He held his nerve and concentration and was successful from the last kick of the game to give the home side the win.