Poem Of The Week: 'Made Up' By Louise G. Cole 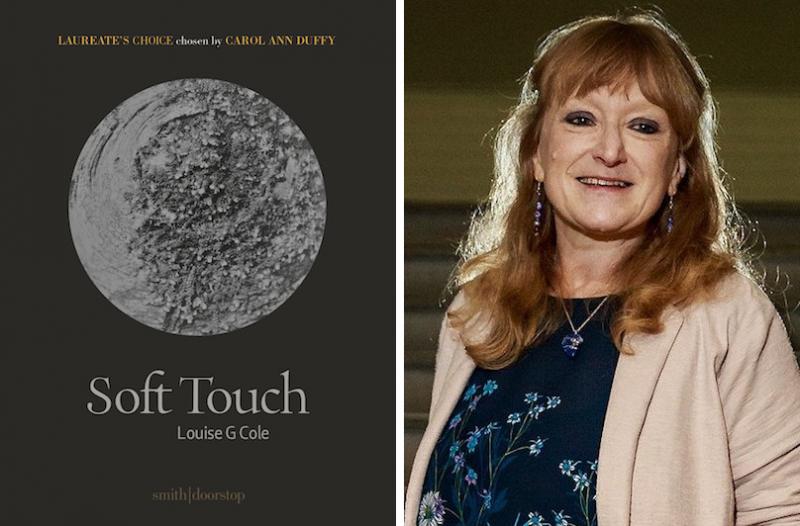 Soft Touch and writer Louise G. Cole
Made Up

This morning’s vanilla and rosemary ritual is unhurried;
today, she’s tethered by the ears to a slim silver screen,
squinting into a dazzled version of herself balanced
on the denim, tight-crossed legs of youth, painting on
a face for the world to see, dabbing with plump pink
sponges, smoothing, shaping, with an artist’s palette
of mascara, shadow, liner in a sparkled fabric pouch
which once held schoolgirl pens and coloured pencils.
She brushes lashes, brows, then hair, flicking, twisting,
pulling, creates a just-left-bed look that’s all the rage.
Done, she gurns at her reflection, turns to see me
standing, watching in the doorway, grins: “Will I do?”

The girl in the mirror in Louise G. Cole’s exquisite piece of observation might be an early incarnation of the narrator’s self, even as its prima facie protagonist is most likely a daughter figure. The emergence of children into adulthood may confer a verisimilitude of appearance, so that the act of peering into the glass yields the illusory image of the parent as a younger person. The mirror in ‘Made Up’ is a focus for reflection and revelation.


Also by Steve Whitaker...
Poem Of The Week:Owdham Footbo' By Ammon Wrigley (1861-1946)Poem Of The Week: The Wireless By Jean StevensBurned By Light: Dovetailing - Gathered NotesNight Swimming:Towards A General Theory Of Love By Clare ShawPoem of the Week: 'Together' By Robert Gibson
The poem’s tone is detached yet emotionally connected: Cole does not allow maternal affinity to obscure the sharpness of her eye for telling, intuitive detail. She is proprietorial yet admiring; a sentinel in the doorway, she signals an urge to protect as she prepares to distil the complexity of relationships, and of self-understanding, into the conduit of words.

The double-entendre of the poem’s title – taken from Cole’s collection Soft Touch, ‘Made Up’ is one of several snappy manipulations of commonplace phrases – captures the easy narcissism and self-absorption of the young. If the mother’s gentle glance lacks the satirical edge of, for example, Belinda’s ‘toilette’ sequence in Alexander Pope’s ‘Rape of the Lock’, there remains a sense of time-served ritual in the daughter’s meticulous attention to the proceedings; the accretions of process add up to an oblation before the altar of self. Pope’s priestess she may not be, but she wears the mystique of youth with effortless insouciance.


‘Made Up’ is taken from Soft Touch and is published by smith ǀ doorstop
http://www.poetrybusiness.co.uk/shop/995/soft-touch