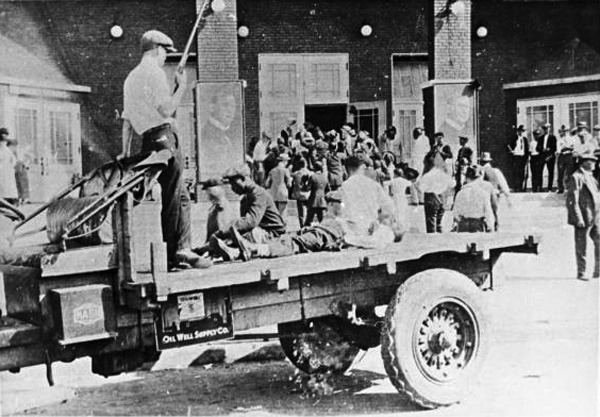 The blazing white shirts of the white men
are blanks on the page, looking at them is like
looking at the sun, you could go blind.
Under the snouts of the machine guns,
the dark glowing skin of the women and
men going to jail. You can look at the
gleaming horse-chestnuts of their faces the whole day.
All but one descend from the wood
back of the flat-bed truck. He lies,
shoes pointed North and South,
knuckles curled under on the splintered slats,
head thrown back as if he is in
a field, his face tilted up
toward the sky, to get the sun on it, to
darken it more and more toward the color of the human.

The picture into which Sharon Olds is gazing is too painful to bear excessive scrutiny, like staring into the sun. The hideous brilliance of the white shirts result in blindness: the assumed righteousness of the men – elsewhere they might be white-hooded KKK - recedes into background emptiness.

And it is not very far from the entropy of an Oklahoman afternoon in 1921 to a Minneapolis evening in the early summer of Covid-19, from an unresponsive, upturned figure on the back of a flat bed truck to the 8 minutes and 46 seconds of George Floyd’s demise. That institutional racism sustains at the heart of the US body politic corroborates the ongoing currency of Olds’ threadbare, starkly-realised and counter-intuitively beautiful poem.

Sharon Olds
For there is an aesthetic component to her resolute reversal of conventional symbolisms. The whiteness which we instinctively associate with a species of virtuous purity is here transformed into a kind of snow-blindness, a melding into uniformity of a torpid controlling culture unable or unwilling to abandon its own baseness – a culture cleaving towards darkness.

Regenerating perception, Olds asserts racial parity through the foregrounding of colour. The recumbent figure might be reclining in the blazing sun, face skyward, taking in the burnishing rays, feet splayed in the direction of the Confederacy and of the Union, in this Midwestern state, in a united nation which never fully accepted the meaning of Emancipation.

The rallentando of Olds’ final lines confers a natural gravitas on the possibility of another kind of imagining: removed from beneath the snout of the shimmering machine gun, and liberated from cultural preconception, the poet envisions an alternative human truth for the black citizens of the US, in the gentle darkening of skin in the sun.