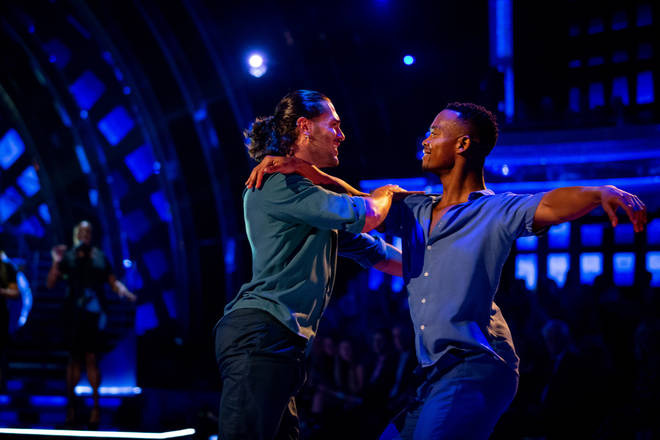 Johannes Radebe and Graziano Di Prima perform landmark same sex routine
It's been a while since my last Strictly review, but on the eve of the final I feel the time is right to cast another semi-critical eye over one of my favourite TV shows.

One of the things I've always loved about Strictly is that it is never knowingly 'under-camped' - that particular boat is pushed out at every opportunity!

This year's stand-out professional is 'newbie' Johannes: a black South African male dancer, whose featured pro-dance made him an instant star due to his ability to wear pink and work a catwalk wearing 4 inch stilettos.

He was also involved in the groundbreaking same-sex routine with the tousled-haired Graziano di Prima, which resulted in almost 200 complaints.

So hats off to the BBC, who responded the following week by delivering the campest pro dance ever: a bonkers totally over the top production which featured the vocally challenged Bruno and oodles of pink feathers.

The Strictly judges are still toe-curlingly awful on being introduced to the audience. Indeed, it's hard to believe that these are all former professional dancers, as they're serially incapable of hitting a mark on a dance floor after 30 chaotic seconds of sashaying and strutting their stuff.

Craig Revel-Horwood inevitably ends up spectacularly adrift of the others when his unflattering signature move - a series of ronde turns - spins out of control. Cue much embarrassed laughter!

Motsi Mabuse, sister of Oti, is a fabulous addition to the judging panel and can 'out Bruno' Bruno with extravagant gestures. Her friendship with head judge Shirley Ballas is quite sweet and is reminiscent of two giggly schoolgirls. I love the way they get all hot and bothered at Kelvin's impressive CV.

Tess is still dispensing unwanted emotional support as celebs wait to receive their marks. Look closely, and you'll see them desperately trying to extricate themselves from her trademark bone-crushing grip.

It's about time someone sat her down and explained that these are fully grown adults who have achieved allegedly successful careers in the cut-throat world of acting, presenting and sport, and as such, are more than able to cope with a 4 from Craig!

Now on to the music: as an armchair expert of 15 years standing, this season's increasingly bizarre song choices appear to have been made by the tea lady, or a teenager on work experience. Has the legend that is Dave Arch gone AWOL? I've lost count of the number of times I've yelled at the screen, “That's never going to work for a cha cha!”

The suitability of the music to the dance in terms of tempo and rhythm, has often been sacrificed on the altar of 'styling': you can almost hear them saying, “this song is gonna be great for props, costumes and lighting.”

When it comes to camera work, call me old fashioned, but given a choice, I'd much prefer the camera to stay in one spot so that I can watch the dance from a distance. I can't be the only one who finds it nausea-inducing to be swirling around a couple who are already swirling a la Viennese waltz. Added to which, the arty-farty camera effects often obscure the very thing we are meant to be observing - a couple's footwork!

As we approach the grand final the contestants have been whittled down to three couples: Anton and Emma Barton (sentimental favourites); Oti and Kelvin Fletcher (hot favourite and wearer of the greatest number of mesh shirts in any series); and Amy and Karim Zeroual (possibly the best dancer, but not the hottest favourite due to him being a CBBC presenter).

Lacking in ideas and devoid of inspiration, Anton invariably turns to comedy. This does a massive disservice to his hapless celebrity partners, who are left to their own devices, heroically doing their best not to resemble a dog's dinner - all over the place and lacking any recognisable shape or form - whilst Anton mugs to the camera shaking his maracas.

However, the fact that Emma and Anton have managed to avoid a Latin dance in the final - the judges have chosen the Charleston - would seem to suggest that Anton du Beke - Strictly's longest serving professional dancer - is being lined up to win the Glitterball trophy after 15 very eventful years.

My theory further states, that he will then retire in a blaze of Strictly glitter and glory and slip seamlessly into the shoes of the late Strictly legend Bruce Forsyth, when the Strictly 'Circle of Life' will be complete.

They've all given a 110 per cent, made a friend for life and been on a journey which they will never forget. It has without a doubt been the best experience of their lives and it would mean everything to win that Glitterball Trophy. So watch this space!