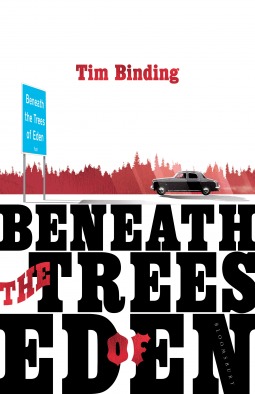 How much wishful thinking is insinuated into fiction is a question perhaps best answered by others. But in the case of Tim Binding’s new novel – a long symbolic excursion through the arterial heartland of England – one infers an authorial projection into a visionary kind of escapism, which may or may not embody a rejection of the wild social and political wind we are presently reaping.

Beginning in an England of the late sixties, Beneath the Trees of Eden filters the prevailing national zeitgeist, if not the actuality of contemporary experience: the country depicted is a mythically-charged parallel landscape where emotional investment in a sub-Rousseauian ideology of individual freedom – the hippy and yippy movements, the anti-war and anti-capitalism riots across Europe and the US – dominates a narrative whose urban and rural backwaters make up the furniture of a dark supporting act. The latter is meaningful in the way that the Liverpool of ‘Penny Lane’ is meaningful, but it is reshaped and harnessed to reflect the greater mind work of solipsism and individual fulfilment.

The resulting tableau is Nietzschian in scale and implication, and if the central protagonists, Alice and Louis’, abandonment to the vortex of self is undertaken in an ancillary reality it is because we are exposed to a world refracted through their eyes. Glimpses of a terrain that we recognise intrude – Binding anchors the odyssey to a well-thumbed, and geographically-persuasive map of England – but this is Britain sifted and skewed: Louis’ preternaturally footloose impulsion is apt to magic heimat from suggestions which take on the character of totems, at least in the eyes of those seeking enlightenment. As idealised visions hove into view like Coleridge’s Pantisocratic idyll, real landscapes are subsumed into the fabric of the fired imagination. So, in this narrative, with Scammonden, that austere moorland reservoir high up in the Pennines, and it is Binding’s great skill to make the real dam, and many other prismatic sites across England, disappear in the mist of teleological yearning, ‘the great misshapen beauty of the unknown’. Louis’ urge for identity, a secret shared with his motorway-building pals, his friends, as Henry Williamson saw it, ‘in ancient sunlight’, finds a kind of memorial resting place in the titanic groynings of this harsh gritstone upland. Binding’s scintillating descriptions give meaning to Louis’ primordial compulsion in metaphors of real anthropomorphic power:

‘They had to cut straight through it, run the plant out on the solid strata underneath and cut it out from the exposed vertical face, great lumps that bled a black and viscous blood. It didn’t want to leave the earth, and it clung to the lorries that took it away. The only way of loosening its grip was to heat the flat of the trucks, so when the back tipped up, it slithered out, reeking of treachery.’

This ‘Klondike’ of the hills, with its brothels and boxing is frontier territory in the way that the hinterland of Ribblehead Viaduct once was, and this is a novel whose stylistic underpinnings are deliberately vapid; mental colour is washed in as landscape colour is washed out, subordinated to the journey, to the ‘classic’ vehicles in which that journey is undertaken, and to the existential need for tireless freewheeling. In fact, the connection with hippydom is tangential, bound up with an unbreakable desire to plough an individual furrow rather than any in any claim to universal philanthropy or collective goodwill. The residual psychopathy of the driven figure of Alice – when we meet her she is twenty and stifled by middle class familial aspiration – is entirely at odds with the schematic benevolence of flower power; by her own admission… ‘All the hippies she had known had been full of shit’. Alice is nothing if not honest to her own sense of purpose.

Binding’s definition of life on the edge – of the promulgation of individual freedom, sometimes at the expense of others – yields a persuasive polemical subtext: that the claiming of independence in extremis comes at a price, that there is danger in obsession. Alice’s species of love for Louis is visceral, it claims dominion of her sexual self; the recognition of a similarly feral spirit in the much older Louis draws her implacably towards his sense of itinerance. Louis is the traveller of no declared provenance; he is the maker of motorways across the country, the builder of road networks whose significance, here, far transcends practical utility. He is of the road and of no fixed abode, a latter day navvy fired with the uncontained joy of the next contract.

A sense of impermanence is key to Binding’s impressionism, but he is remarkably skilled at realising the direction of narrative thrust – movement, however transient, is cast symbolically: lengthy paragraphs meander towards a denouement that doesn’t arrive, subordinate clauses metal the road to the promised land. The static reality of hotel bedrooms, of shabbily temporary domiciliary arrangements in self-penned ‘hovels’, is secondary because the pyrrhic call of the ‘fat of the lan’ over the hill overwhelms the desire for root-laying and domestic inertia. 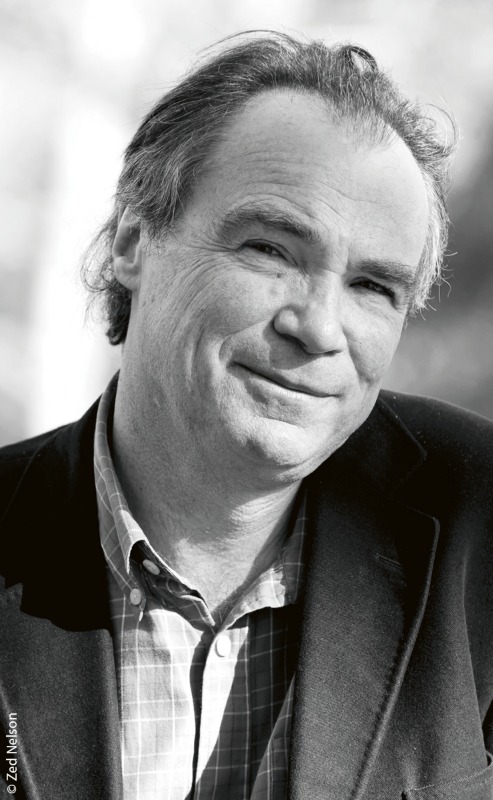 Tim Binding
The tributary inveigling of a messianism of portents is perhaps inevitable in a narrative whose singularly driven dimensions demand a kind of certainty. The progression of Beneath the Trees of Eden is a mirror to a metaphysical journey, punctuated by the symbolism of the stable and the Cross, amongst ironies of dripping gullies and signs. The heft of religion in a climate predisposed to misreading and extremity is a recourse to behold; think the Wiseblood of Flannery O’Connor’s Deep South, given new currency in the sunless high Pennine moors.

When John Wesley rode over those same hills to Huddersfield he was moved to write that ‘a wilder people he never saw in England’. And there is a stark recapitulation of his charismatic power in the mystical figure of Jonas, who travels on horseback like Wesley, dispensing enigmatic words like fairy dust, and then is gone. In a narrative of ruthless inter-connections, Chester - Alice and Louis’ strange, introspective son - is obsessed by what he has read of Wesley, whose own obsession offers focus and direction, in a domestic universe frequently vacated by his (Chester’s) itinerant parents. The unworkable blueprint of their impulse-driven journey cannot accommodate the permanent presence of others, including progeny, who might break the charmed circle; they leave their son in Epping Forest with Louis’ sometime friend and lover, Lot. ‘Chess’, in turn, is left to make sense of the world through overarching signifiers – books read, historical odysseys (mis)interpreted, Gods identified in the trees and hills.

That impulse is all-consuming: Alice’s urge to procreate, to people a corner of an indifferent universe with a ‘tribe’ in hers and Louis’ image is a reflection of an overwhelming instinctual drive, not a duty of care. ‘Full and swollen’, violently sexual, there is a natural consonance between Alice’s condition and the explosiveness of her thralled imagination. The love that is a hybrid of lust and physical longing overcomes its own destructive propensity in the end; Binding draws a devotion that bespeaks a different kind of duty after Louis is floored by a catastrophic stroke, the flame of his own potency embered with age. In some of the novel’s most beautifully written and affecting passages, Alice’s matured love gives leave for self-sacrifice, a state of mind to which she has hitherto been a stranger.


Also by Steve Whitaker...
Poem Of The Week: 'Master Of Works' By Rennie Parker'As Though To Breathe Were Life' : Appius And Virginia By G.E. TrevelyanPoem Of The Week: 'Snowdrop' By Ted Hughes'To Travel Hopefully' : Stations Of The MindInto the Light: Sheaf (Digital) Poetry Festival 2020
Until this transformative point, the dynamic of Alice’s existence is inflamed, summed in cosmic occurrences which yield the power of suggestion in her fertile imagination, and perform the work of metaphor in ours. The rehearsing of the ill-fated Apollo 13 mission of 1970, and the reappearing of the visionary ‘Brebis’, the lamb of god by any other name, are two of the axes on which her mind is consumed: images of Lovell, Swigert and Haise’s orbiting of the earth in a terminally damaged module recur with the ferocity of mortal danger; cast adrift in space, the astronauts’ miraculous return to earth is preceded by a cutting loose, the epitome of an abandonment to freedom and terror which profoundly illuminates the exceptionalism of Alice’s motivation.

The terrain of this most American of novels is not foreshortened by England’s limited geographical horizon. Binding’s swathingly symbolic vision – at one moment redolent of Faulkner, at another, of Steinbeck – cannot impose borders on the grandest of imaginative estates; rather does it overlay the England we all recognise with a surreal patina. Beneath the Trees of Eden is no less than astonishing – a brilliant and sincere realisation of a landscape, its dark presence, and its power to shape the moods and predilections of those it hosts.

Reconciliation, when it arrives, is as fittingly redemptive as any reader of American fiction of the early part of the last century might expect. A death, and a burial deep on Scammonden moor, represent moments of luminous gravitas towards which Binding’s long narrative has toiled. The despising of the mundane and the depressingly ergonomic – ‘the caravans decked out like conspitated bungalows’, the humdrum horror of suburbia – find a stark contrast in the dripping hills:

‘He nodded. The moor was like a cathedral without walls, without a roof, flat and bare touching the sky. What sort of angels flew here?’


Beneath the Trees of Eden is published by Bloomsbury