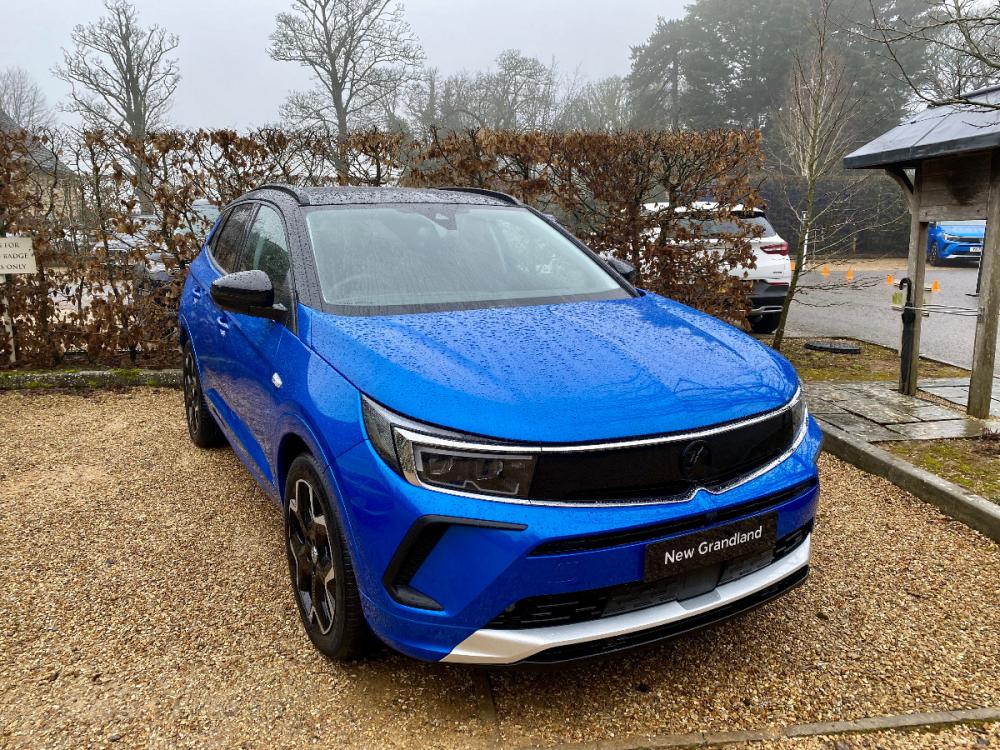 As part of Vauxhall’s SUV expansion, the Grandland X burst on to the motoring scene in 2018. It sold well for the brand with some 70,000 finding homes in the UK. European sales topped 300,000.

I would confess to being slightly underwhelmed by the car. It was competent, perhaps a little dull and did not shine in any particular area.

My test route took in a good mix of roads, in appalling weather conditions.
C-segment SUVs are now the largest single sector in the UK, accounting for one in six vehicles sold. Vauxhall could ill afford to rest on their laurels with such luminaries as the Nissan Qashqai, Kia Sportage and Peugeot 3008 all vying for class honours.

Behold then the new Vauxhall Grandland, the ‘X’ having been dropped. I journeyed south to the Cotswolds to get an early first drive and must say I came away impressed.

The new Grandland has plenty of kerb appeal, something its predecessor sorely lacked. With styling cues from the smaller Mokka, the car sports the new Vauxhall corporate face, soon to be seen too on the forthcoming Astra replacement. 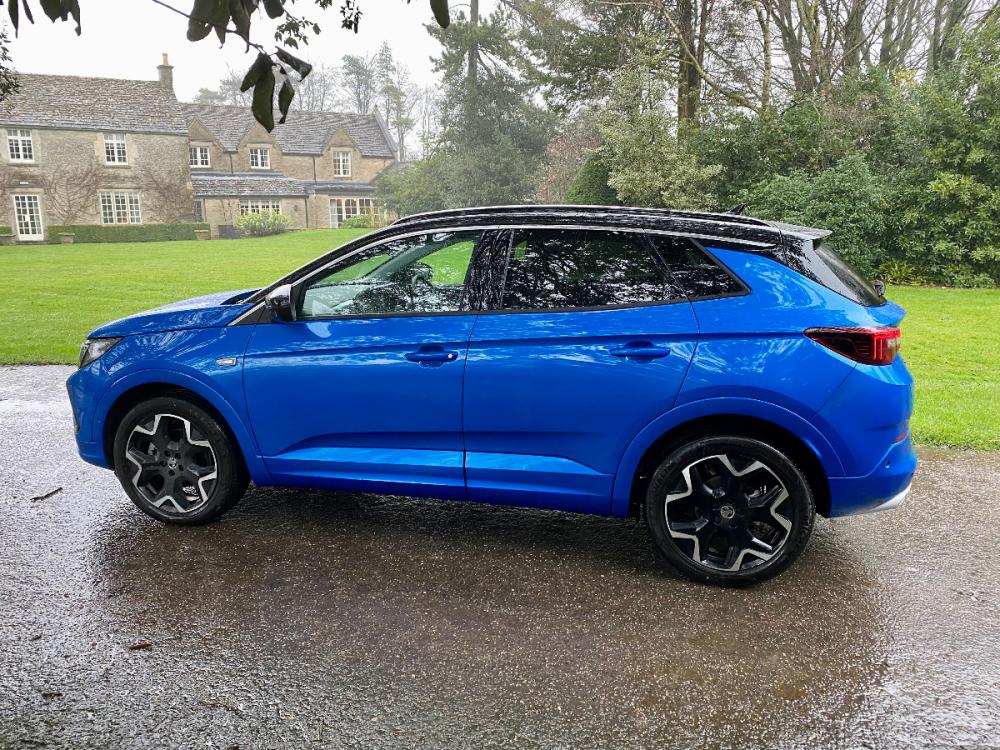 A simplified range of three models, Design, GS Line and Ultimate, are now offered with an entry point price of £27,590, 6% lower than before. The Plug-in HYBRID-e is said to be the most attainable C-SUV PHEV at £33,820. Residual values are up five percentage points too which should make for attractive PCP deals.

The PHEV will offer an electric only range of up to 39 miles, which is competitive, and the 11% BIK will appeal to business users.

The mid-spec GS Line is expected to be the best-selling trim, and it’s the sporty variant too. All models are well equipped though, so the Design model might well just suit.

The Grandland interior has been given a comprehensive makeover and now boasts a much higher quality feel. 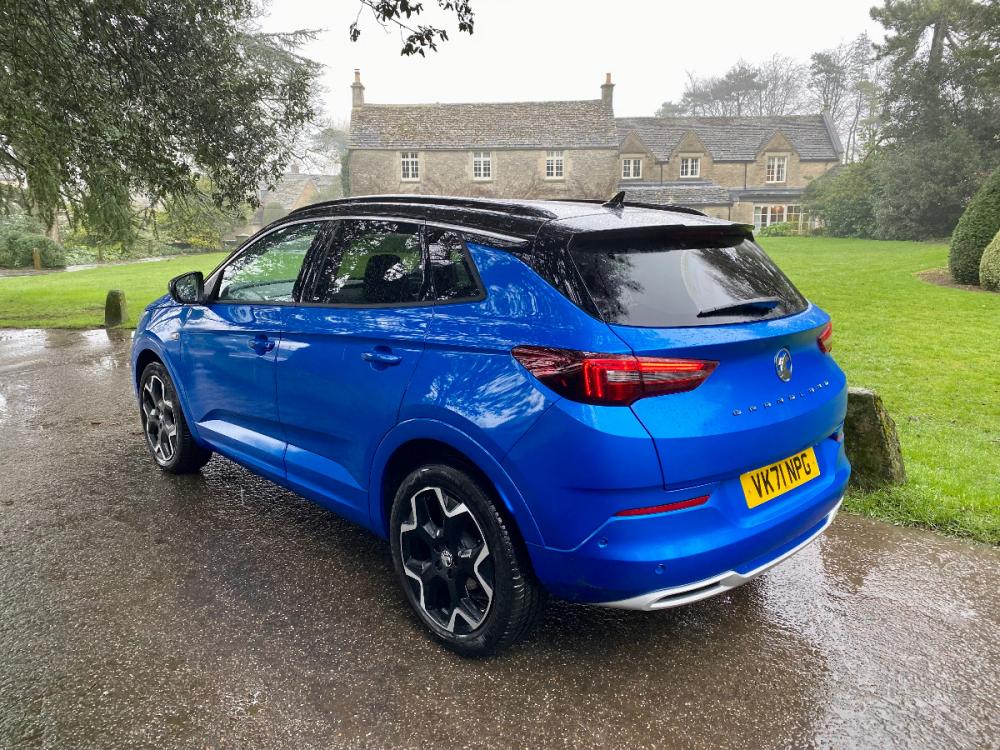 Front seats are comfortable and supportive and ahead of the driver a dashboard built around Vauxhall’s twin-screen Pure Panel will surely delight. The screens, of varying sizes depending on the model, convey all the required information and allow access to the infotainment system.
I was pleased to note that the heater controls have been kept separate and are operated by simple rotary dials.

A 130PS diesel engine is offered, coming as standard with a smooth eight-speed automatic gearbox. Official figures show it can achieve up to 54.3mpg. It may well suit some higher mileage motorists.

Most buyers will doubtless select the 130PS 1.2-litre petrol engine. It’s a willing and peppy motor, capable of hauling the Grandland from rest to 60mph in a smidgen over ten seconds, should you feel the need. Expect mid 40s mpg if driven sensibly.

Don’t be put of by its diminutive size. It’s a proven unit which has seen service in other Stellantis brand models, such as the Peugeot 3008. 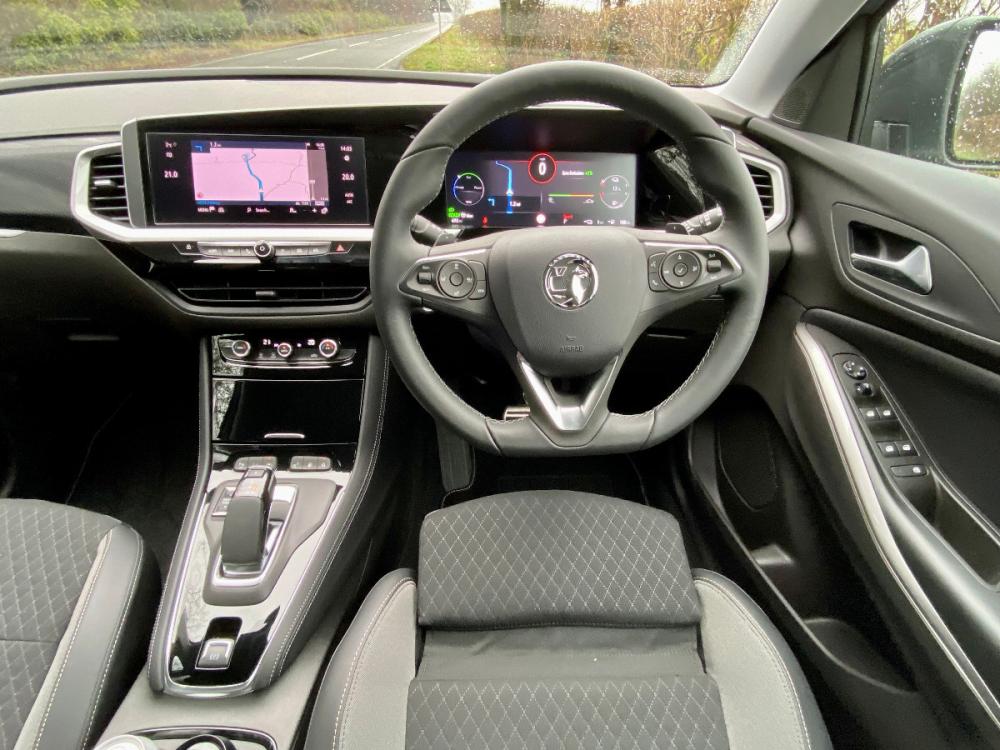 The PHEV is the quickest and the most frugal, though only if you make the effort to keep the battery topped up as much as possible. Do so, and you will be surprised at the impressive readings from the trip computer. Fail to do so, then you are just lugging around a heavy battery for no good reason…

My test route took in a good mix of roads, in appalling weather conditions. Motorway cruising was a refined and relaxing affair. Once on more challenging A and B roads, the Grandland continued to impress. Ride is comfortable yet controlled and body roll is well contained even on more challenging corners.

I got to sample both the PHEV and 130PS petrol engine variants, but of course it is the former which is most interesting. It comes with the eight-speed automatic gearbox, which shifts smoothly and unobtrusively through the ratios and boasts an 81kW motor which is mated to a 1.6-litre petrol engine, with total power being a heady 225PS.

There are three drive modes: Electric, Sport and Hybrid. The latter is the default mode, which aims to optimise fuel efficiency. The switch between modes is barely perceptible. Being able to select full electric mode is a useful feature, especially if part of your journey encompasses a zero or low emission zone. 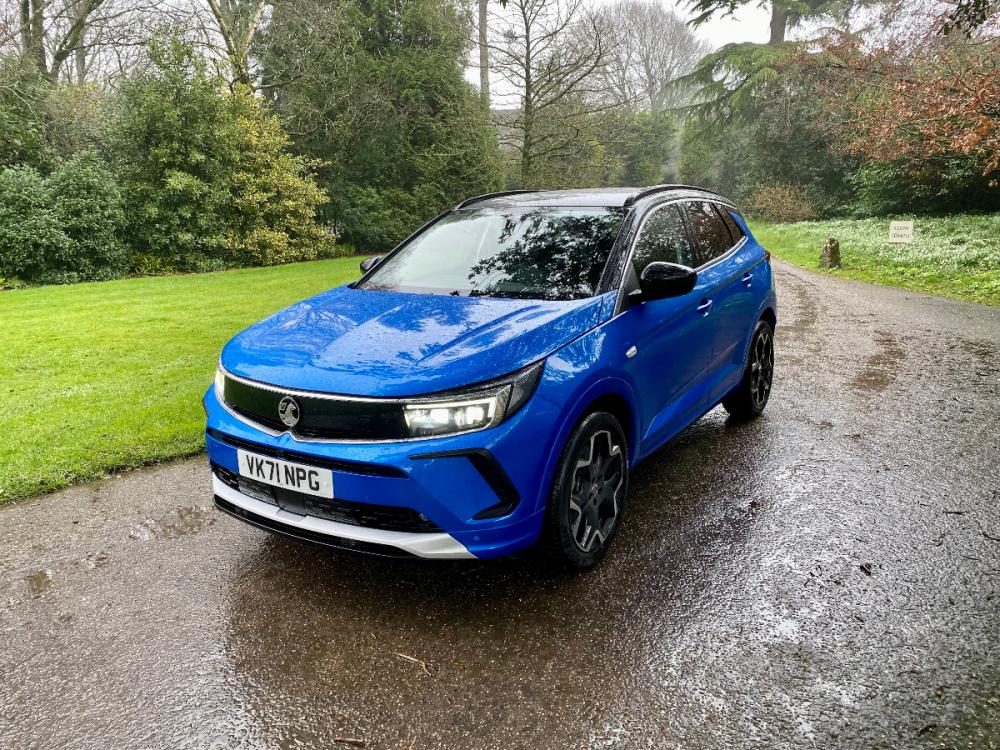 On the move, there is the ability to top the battery up using brake regeneration. It could be stronger, though not all drivers will warm to the rather unusual sensation.

You can charge the Grandland PHEV from 0-100% in 3h30 or just 1h45 with the optional 6.6kW on-board charger. There is also the option to charge from a domestic 3-pin plug if required.

All Grandland models come with a raft of safety equipment, expected these days. Best-in-class LED Pixel lighting is an option as is a night vision infra-red camera with the ability to spot humans and animals up to 100 metres away.

The Grandland still offers a roomy interior for up to five, with a generous 514litre boot for luggage etc. The PHEV does lose 100 or so litres thanks to the battery installation. 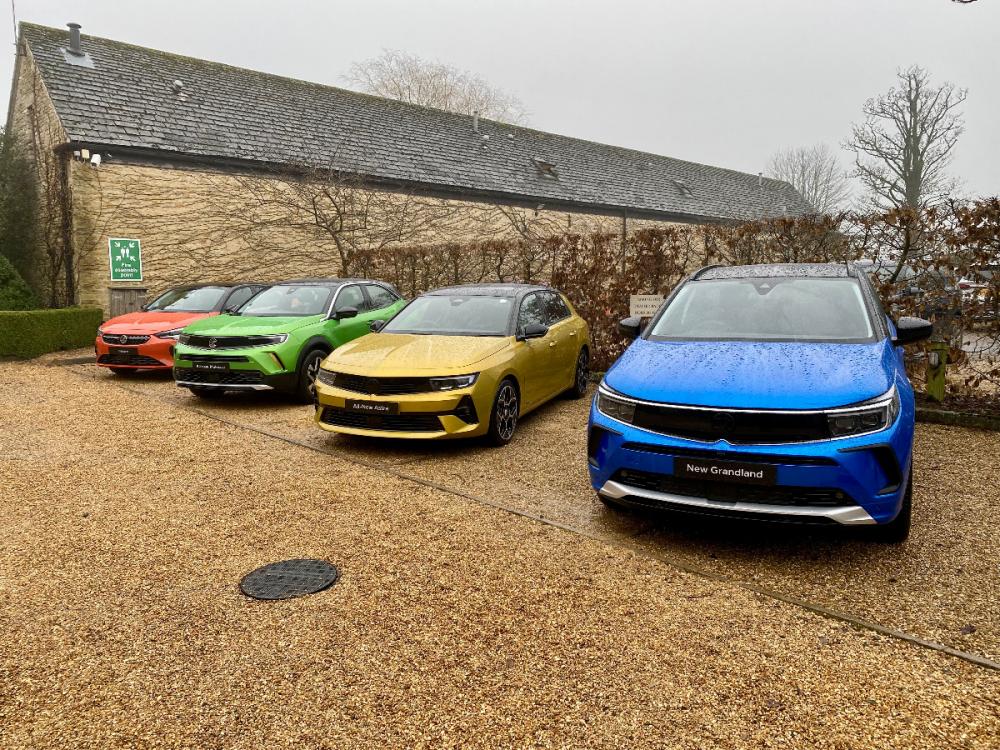 ‘The colourful and stylish Vauxhall range’
So, more affordable prices, a bold and stylish new look and a range of engines to suit all, would lead me to the conclusion that you should check out the new Grandland if a family-sized SUV is what you need. Good job Vauxhall.