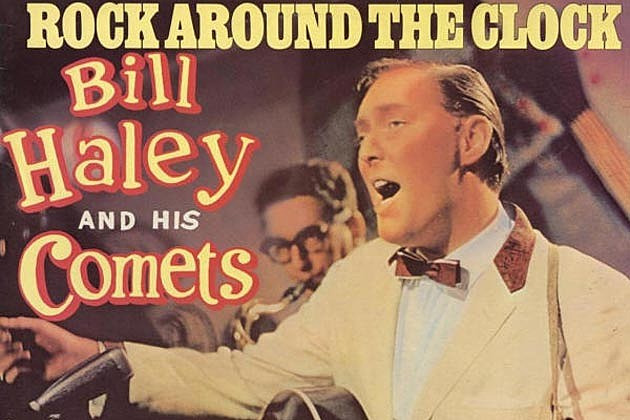 I was thirteen when I first heard ‘Rock Around the Clock’. Dorothy and I had come back from our school in Bury on the bus, and now we were mooching around on Yorkshire Street in Rochdale. A big new shop had opened recently, called Littlewood’s, a sort of down-market Marks and Spencer, but posher than Woolworth’s. At the far end of the store was a section selling records. Not only that, they played them, too, different genres at different times of day, so as to reach the sort of clientele who’d be there. Late afternoons the shop was full of teenagers and this particular day they were playing ‘Rock Around the Clock.’

We stood transfixed. We had never heard anything like it. It was superb! I wanted to hear it again and again.

I didn’t have a record player, but I rushed home, and described what I’d heard, and how it had made me feel, and begged my parents to buy me one, plus the recording of ‘Rock Around the Clock.’ My parents were disapproving, my mother in particular. Her favourite words of condemnation were, “It’s common.” Usually if something was popular it followed that it was ‘common’ too. Furthermore, I was NOT to go in Littlewood’s store, ever again.

So I went to tell Grandad about it.

Grandad said it sounded wonderful, and he’d go to see for himself.

He walked everywhere. I think he was the fittest person I’ve ever met, despite his unvarying diet of meat and potatoes. When he was seventy-two, he won the Sprint at Dunlop Sports, and he used to do standing jumps onto the table as a ‘party trick’. Dorothy remembers him standing on his head when he was seventy-nine.

The day after I’d told him about the record, he set off, ‘like a two-year old’, as he used to say, walked into Rochdale, and went into Littlewood’s Store. There, at the far end on the left, was the music section. Grandad stood and listened a while. It was late morning, and most of the music being played was crooners and ballad singers.

“Do they get paid for this?” he asked the assistant.

“Nay, lad, folk don’t want to listen to this. Now, get that racket off, I’ll show you how it should be done.”

And with that, he launched into song. He had a strong tenor voice, a bit like Tom Jones, and a phenomenal memory. His favourites were , ‘I’ll take you home again, Kathleen,’ ‘Now is the hour’, and ‘Galway Bay.’ He’d only to hear a song once, and he could remember both the tune and the words, so he had a wide repertoire along the lines of ‘Take a pair of sparkling eyes’, and ‘Only a bird in a gilded cage.’

His renderings were always dramatic, with accompanying gestures. Soon, a crowd had gathered round, listening spellbound. The shop assistant just stood, not knowing what to do.

“Do you do requests?” someone called out, so Grandad started to sing whatever people asked for.

“Are you here every day?” he was asked.

“I can be. Not Saturdays, though. We see relatives on Saturdays.”

After a good half-hour, he stopped, and said he’d be back tomorrow, and to come with their requests. He left to loud applause. When he got home and told Grandma, she shook her head in resignation.

“They shouldn’t encourage you,” was all she said. Then she came to tell my mother, who was mortified. The only comfort she had was that her friends were unlikely to shop there, and would not know who this odd person singing was, anyway, or that he had any connection with her, should they go slumming it on their way to the Conservative Ladies Coffee Morning, or some such.

Every day after that, Grandad went into town to be ready to sing at eleven o’clock. He soon had quite a following of people who went specially to hear him.
After all, the entertainment was free…..

The record department assistant was in despair. None of the morning shoppers wanted to hear his music. He switched off the record-player as soon as Grandad approached, ready. His sales figures plummeted. The teenagers who went in after school didn’t have much money. The only real trade he got was on Saturdays, when the town was full of shoppers – but not Grandad.

This could not go on. The store manager became concerned about the low sales figures, and wanted to know why. The poor young shop assistant tried to explain.

“Why don’t you stop him?” the manager wanted to know.

“I can’t. He’s a big following”. Then, “It does get a lot of people into the store…….” His voice trailed off. This did nothing to help matters.

The manager decided to take matters into his own hands. On Monday morning, he was waiting to see what happened. Grandad duly arrived, said hello to the shop assistant, and greeted the waiting crowd of his fans. The manager stepped forward. “Could I have a word?” he asked.

“I haven’t got long,” Grandad said. “I’ve got folk waiting.”

As you can imagine, there was an exchange of words. Grandad pointed out they were lucky to have him, performing for free.

“I should be on that there Hughie Greene”, he said, naming a talent show on television.

“Mr. Lord,” the manager pleaded, “I know you’re very good, and people like hearing you, but I’ve got a store to run, and our sales figures are down, and all these people you’ve got coming are blocking the aisles. And besides we’re not licensed for live singing. It’s got to stop.”

Then he said words which horrified Grandad.

“Why can’t you go and sit in the Memorial Gardens with all the other old men?”

“Old? Me? What are you talking about? I’m not old! I’m nobbut eighty-five! I’m not staying here to be insulted.”

The power of that one word, ‘old’! Grandad marched off, never to darken the doors of Littlewood’s Stores ever again. He never sat in the Memorial Gardens either……

The film ‘Rock Around the Clock’ came to the Empire Cinema in the town centre, but I would no more have been allowed to go than to fly to the moon. The film’s effect on teenagers was astounding. A riot erupted, seats were torn up, and the aisles were filled with a jiving mass, which then spilled out into the Town Hall Square. The police had to come.

A few months later, the film was shown again, this time at the Hippodrome. The staff there weren’t taking any chances, and security was in place. One of my friends, Edie Young, needed to go to the toilet partway through. She stood up, and edged along the row to the aisle – where she was promptly seized, accused of dancing, and thrown out, ‘for trying to start a riot.’

“But I only wanted a wee,” she said.
More in this series...
Grandad’s MotherUncle Jim Pops His Clogs - And Other Funerals I Have KnownGrandad Joins The Sally ArmyGrandad Goes Courting. A True Account Of My Grandad's Second Marriage