The Weekender: Dressing Up With Pauline Rourke 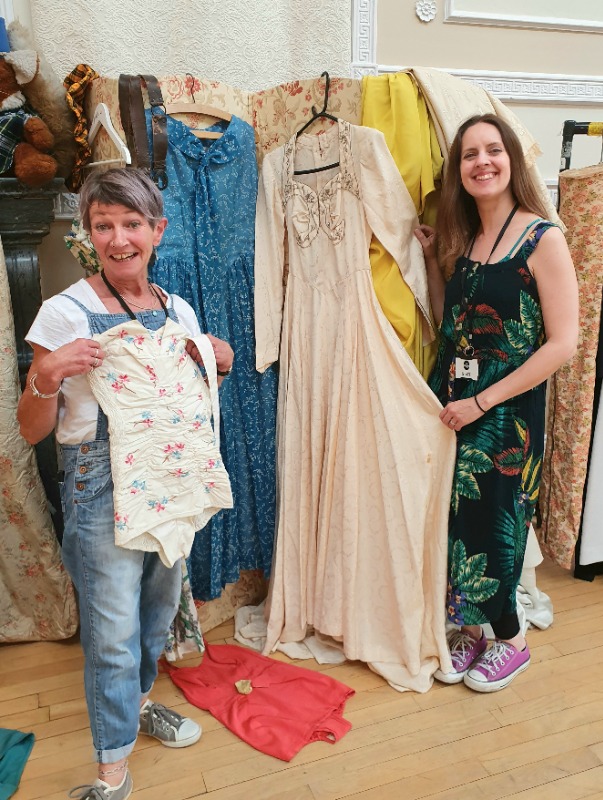 (L-R)Pauline Rourke with costume hire assistant Claire Spooner
My sat nav informed me I had arrived at my destination, so I parked up on a small business estate on the outskirts of York and walked through an innocuous front door to an industrial unit.

Nothing unusual there, except the door in the righthand corner.

On entering it gave me the same thrill as Lucy, when she inadvertently stepped through the famous closet in CS Lewis’ The Lion the Witch and the Wardrobe.
And ‘wardrobe’ is the key. 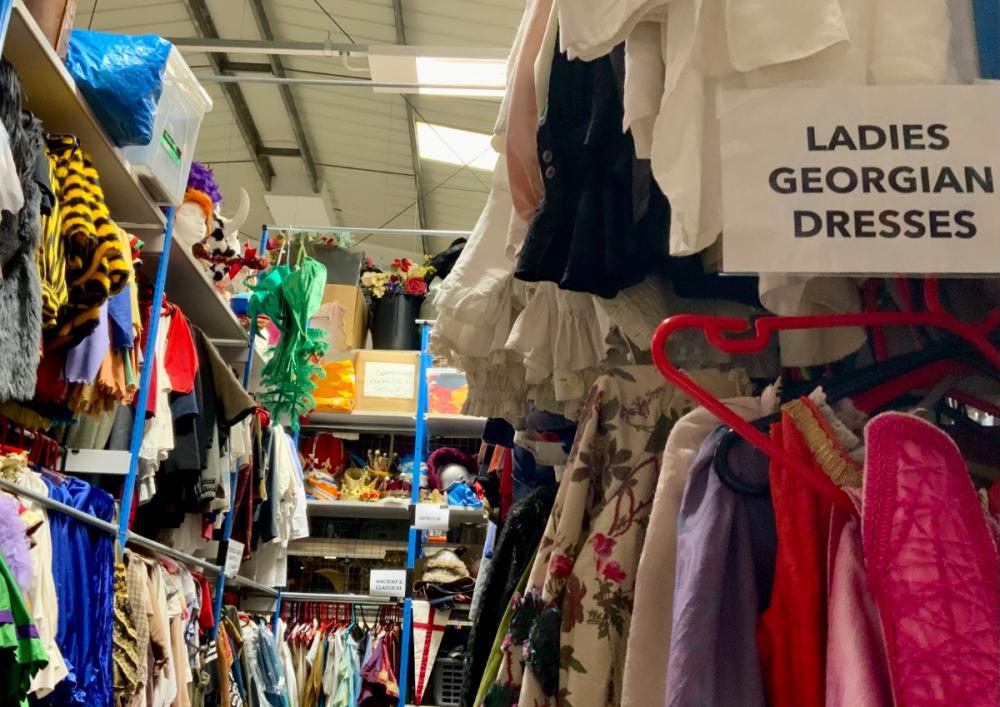 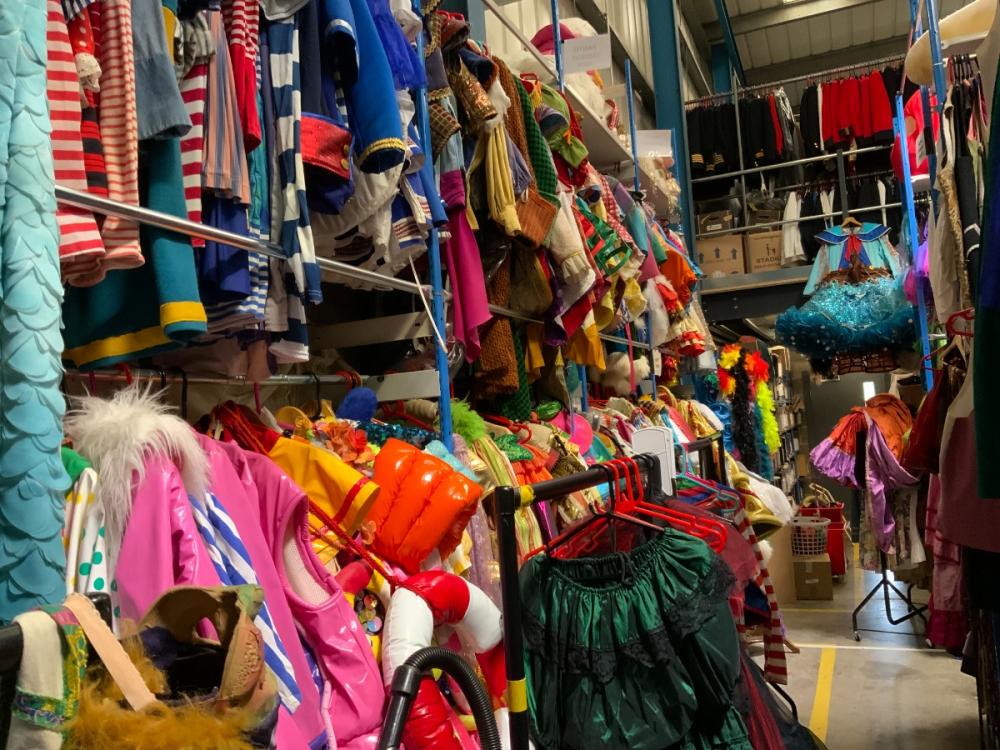 My imagination began to run riot. I was standing in an Aladdin’s Cave packed to the rafters with costumes all part of York Theatre’s costume department. I was meeting an enthusiastic Pauline Rourke, not only mistress of the closet but a woman with a wealth of theatrical anecdotes to tell.


Bridgerton is all the rage at the moment along with Peaky Blinders and Secret Cinema
Pauline has been running the costume hire department for 27 years and recently was Ralph Fiennes dresser when he performed all of TS Eliot’s Four Quartets, something I am disappointed to learn, as I missed it.

She is also the curator of this magical place that can boast original items from the late 19th century, 100 metres of densely filled racks and circa 12,000 items. “Organised chaos” is how Pauline describes it to me.

There are thousands of pieces in the collection including some worn by Miriam Margolyes as Madame Ranyevsky in The Cherry Orchard and two frocks made for Honor Blackman when she stared in The Glass Menagerie, as well as a denim shirt worn by Robson Green as Jesus in the York Mystery Plays. 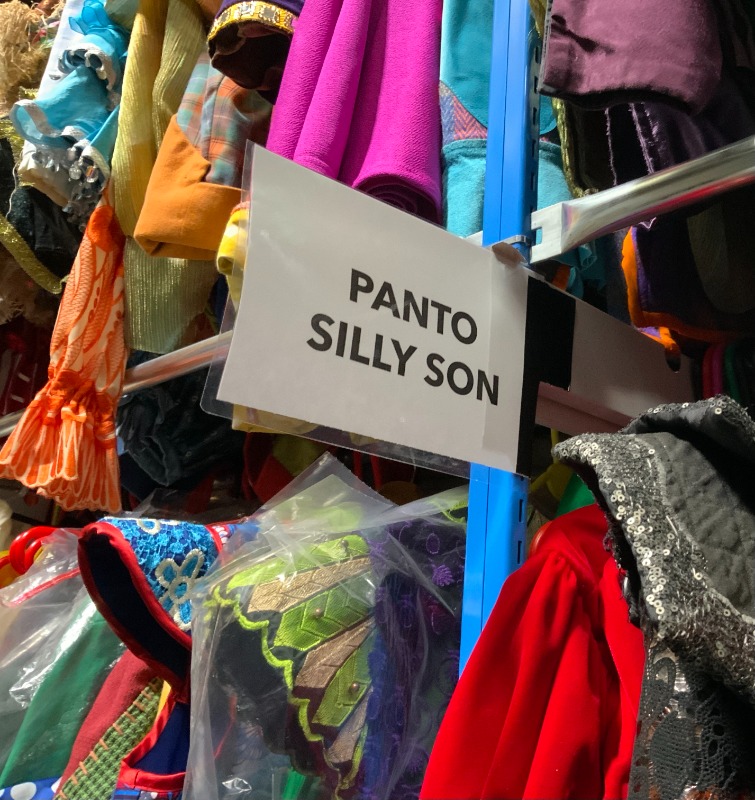 “Compare us to the Royal Shakespeare Company in Stratford they have 40,000 costumes so York is not doing badly,” she proudly says.

“The beginning of lockdown in 2021 coincided with the lease being up on De Grey Rooms in York. We had been leasing rooms for nine years from York Conservation Trust. Luckily, because the theatre was closed during the pandemic, we were able to move the complete collection to the stage. When we hung everything on stage the costumes weighed a staggering 7.5 tonnes! With another three tonnes of shoes, and hats in boxes!”

That’s impressive and I am surprised to learn that many of the costumes are for hire, not just for local amateur dramatic productions and pantomimes but open to the public for fancy dress hire.

According to Pauline she can predict what people are going to require.

“Bridgerton is all the rage at the moment along with Peaky Blinders and Secret Cinema, that’s one I would love to go to,” Pauline says.

“There were a lot of Yorkshire men parading around London as Mr Darcy.

“People come from everywhere because we have an unrivalled and fabulous pantomime collection all of which has been made in-house”.


As I started getting lost in a sea of colourful and bright costumes, I am caught by the large pantomime collection mainly designed for Berwick Kaler, who has the accolade of being the country’s longest serving pantomime dame.
The community also gets involved in wardrobe work when the theatre produces a community production, such as this summer’s staging of The Coppergate Woman about a Viking God in modernday York. Volunteers will work with Pauline and costume hire assistant Claire Spooner to sort out costumes for the production. Other volunteers will work in stage management and marketing as well as acting, guided by theatre professionals.

In fact, there is a replica of a costume worn by suffragette Emmeline Pankhurst during a famous speech that was made by the costume department using photographs of the original. It was made for a previous community production about the suffragettes, Everything is possible. This year’s production is The Coppergate Woman.

As I started getting lost in a sea of colourful and bright costumes, I am caught by the large pantomime collection mainly designed for Berwick Kaler, who has the accolade of being the country’s longest serving pantomime dame. One of his dresses is currently on display at the V&A. Another of the dame’s outfits is on show at Castle Museum in York. Pauline and Claire Spooner have also sorted costumes for a forthcoming historical exhibition at Barley Hall in York. 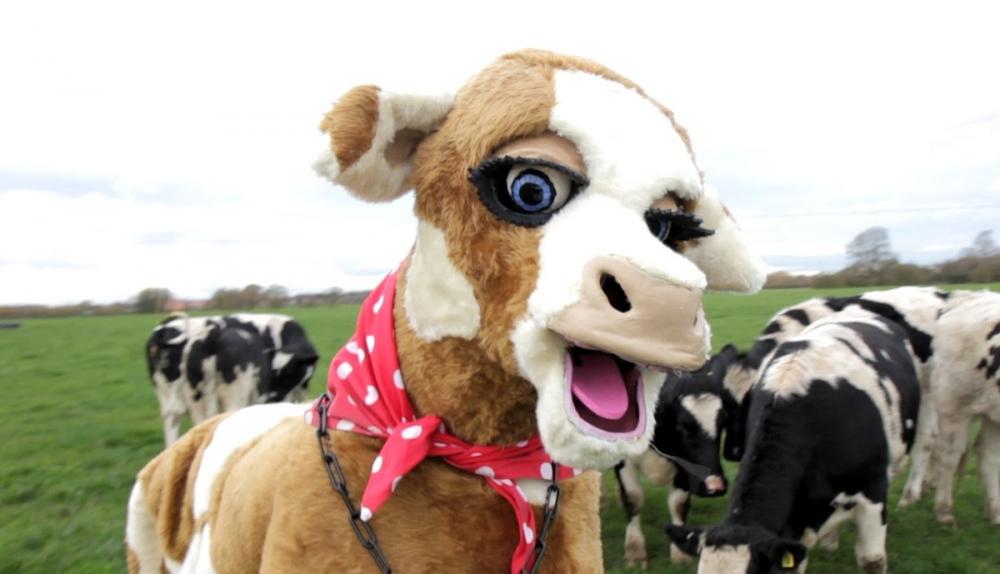 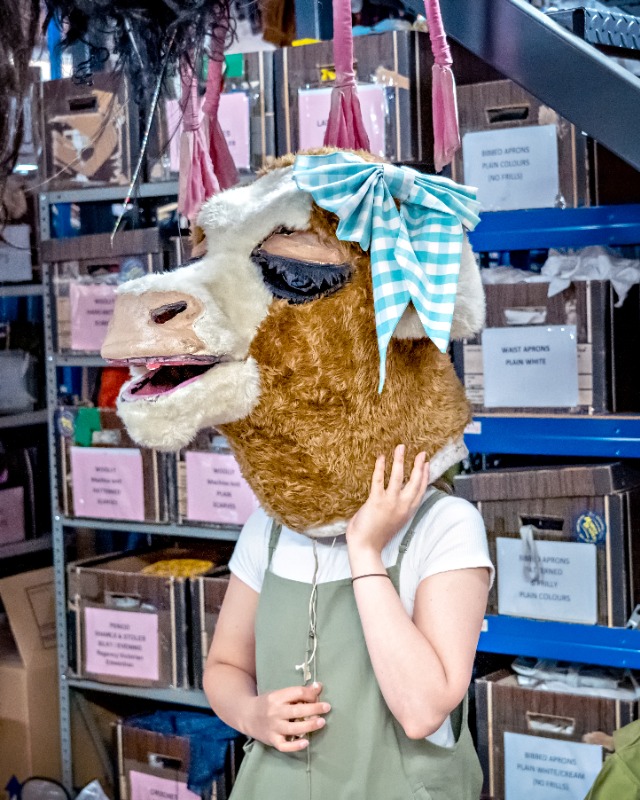 The next thing I hear is: “Meet Patricia,” as Pauline introduces me to a ‘reworked’ pantomime cow that started life as a Friesian before transforming into a Jersey. “Like me, Patricia has appeared on television in Bargain Hunt and also the Crystal Maze,” Pauline says.

Patricia is sitting next to Black Bess the pantomime horse and surprisingly it is not as heavy as I thought. Looking at the infrastructure inside it is built round a cycle helmet as, I am informed, most costumes of this type are these days. As Pauline holds up costume after costume and story after story follows, I get to understand and appreciate the amusing and funny world she inhabits. But it also has another role and quite an important one. Some of the archive costumes, which are not for hire to anyone, are a valuable source for fashion designers and those doing historical research. Pauline also keeps abreast of school curricula so she can supply costumes for plays. 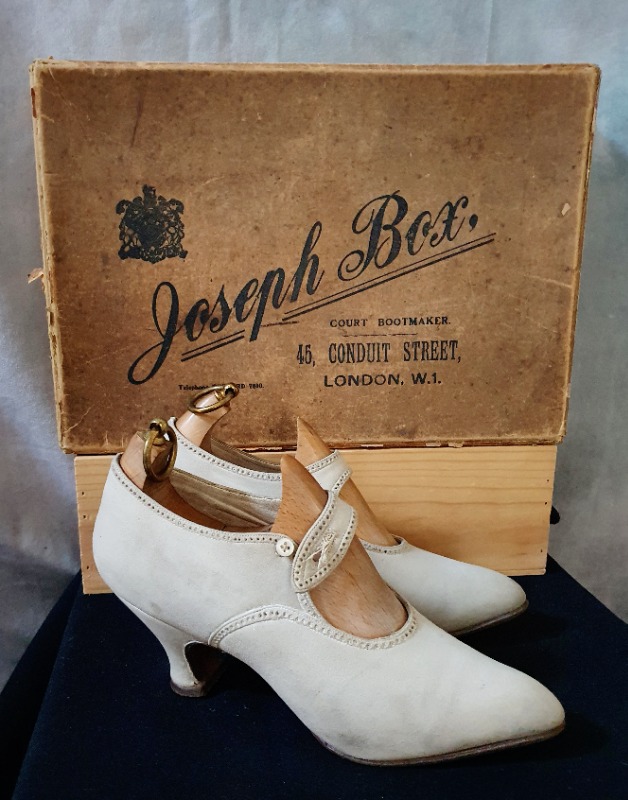 “Look at this,” I am told as I am shown a pair of Joseph Box original tree shoes with cardboard box that were worn by a great grandmother at her wedding.
“And, what about this?” Pauline says.

This time it is a donation from a man who donated his parent’s military uniforms, including one worn when his mother worked at Bletchley Park during WW2. He didn’t know she’d worked at the top secret facility until after she died.

Donations are a useful resource for Pauline; she has donated some of her own mum’s and aunt’s clothes.

“It’s a great luxury to knowing they are here.”

A best man organising a stag party came to hire a beautiful princesses dress and obviously worried about its return enquired what would happen if it got ruined. He was taken by surprise to hear it would cost £700 to £800 to replace. Despite the shock, the dress was, nevertheless hired, and came back spotless. Pauline did enquire if they had an enjoyable time and the lads confirmed it had been great, they were just incredibly careful. 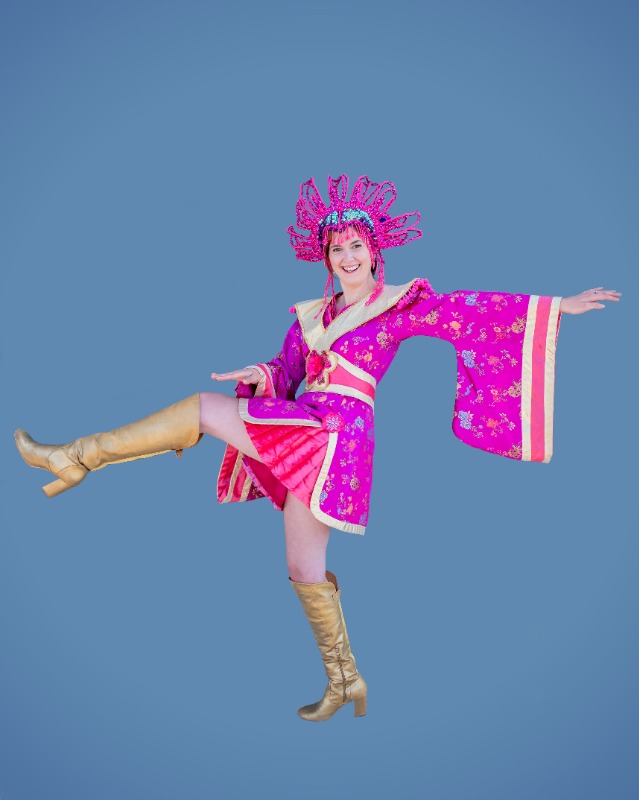 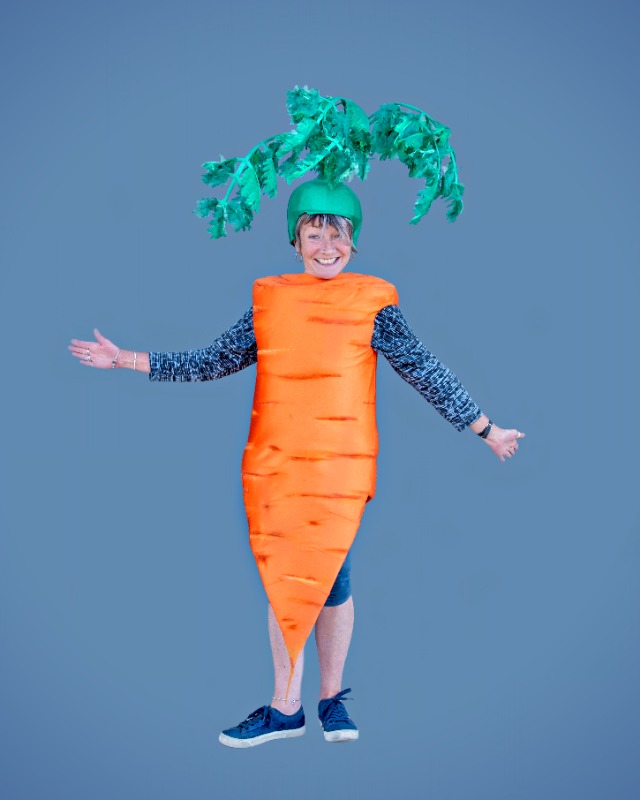 In all her time she has never been stumped. Well, just once, when a lady enquired if she had a pink rabbit’s costume. Pauline tells me that all she had was a beige one, but it was no good.

Enquiring why it had to be pink, she was informed the lady had promised a friend she would undertake a very important, personal task on her friend’s behalf dressed as a pink rabbit. 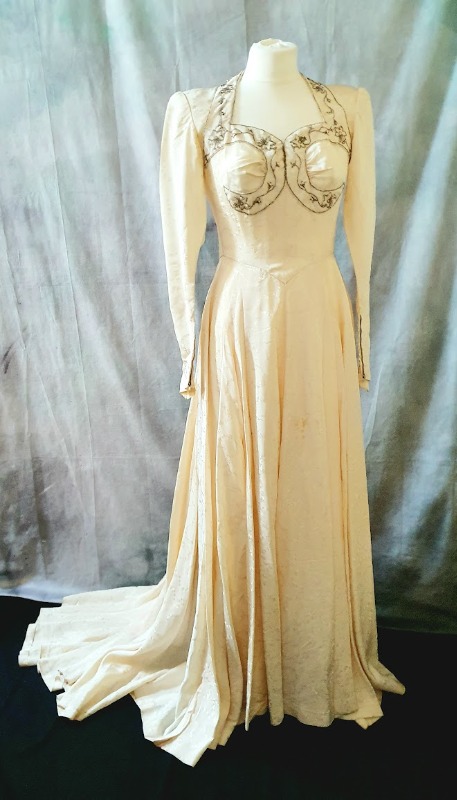 “The funny thing was she asked if there was anywhere else one could be hired. But it can’t be synthetic! I left it there,” Pauline says raising her eyes to the ceiling.

Sometimes there is great excitement. When the theatre was being renovated in 2016 a profound sense of anticipation and thrill went round after a Georgian style man’s shoe was found buried beneath the main stage.

“I burst the anticipation bubble when I pointed out it had plastic on it,” Pauline declared.

The stories are endless. One Tudor style doublet was returned with one sleeve missing. An actor wearing the costume cut her arm during a performance. Pauline received a call from a hospital A&E department asking for permission it cut the costume. It now hangs on the ‘distressed’ rail of costumes.

Distressed costumes are those that are too old or have been adapted for a special reason such as the wedding dress I am shown. It has been spray painted and a blow torch taken to it. Perfect for Miss Haversham.

For now, though I must venture back through the door into reception. As I do I have one last look around and wonder what I would look like in one of the Pantomime dames dresses. Should I or shouldn’t I try one on.

Hmmm … perhaps not on this occasion and I quickly step back through the door to reality. 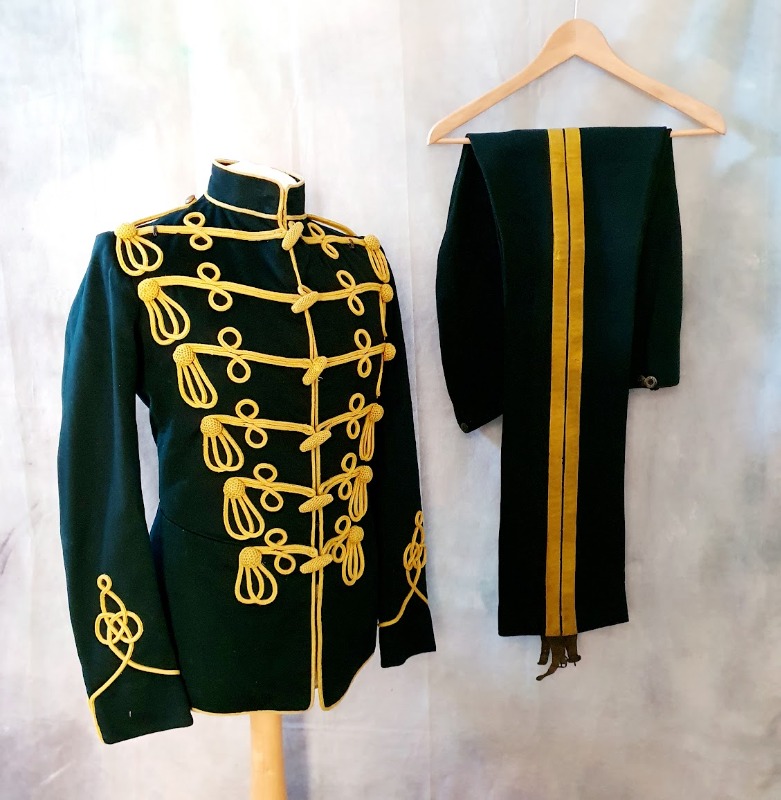 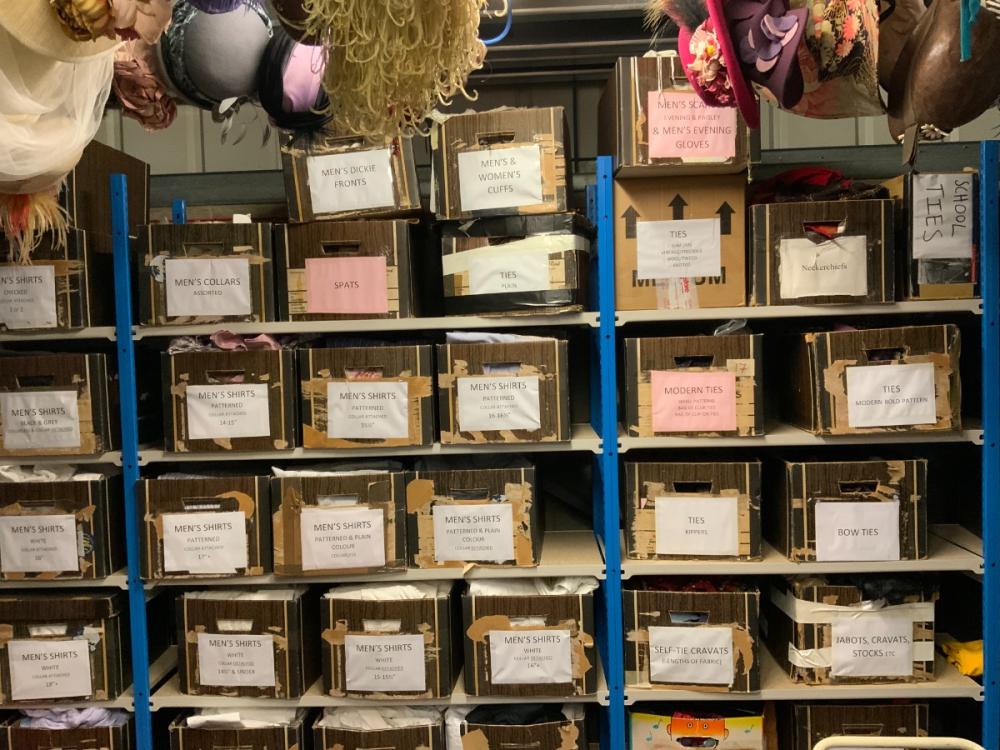 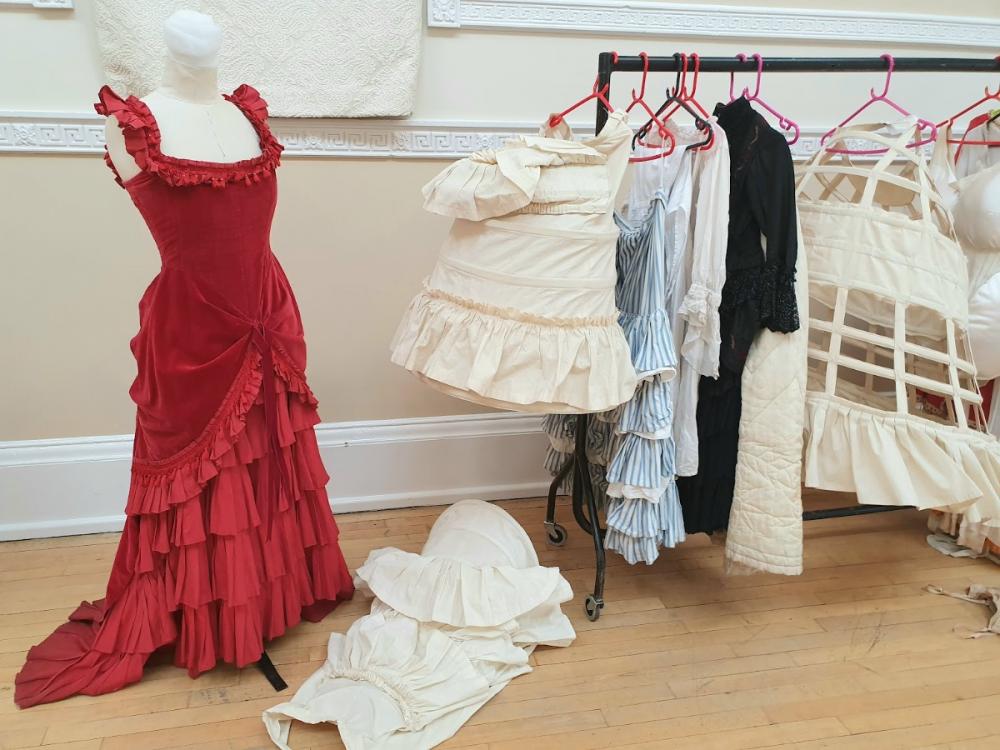