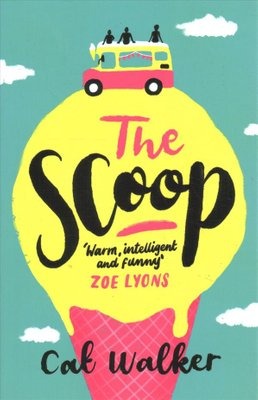 Somerset Maugham tells us in Of Human Bondage, ‘The secret to life is meaningless unless you discover it for yourself’. Douglas Adams, on the other, hand believed the answer to the ultimate question to be ‘42’! Echoing The Hitch Hikers Guide to the Galaxy’s use of whimsy and a quasi-encyclopaedic travel guide form, Cat Walker’s debut novel is an ambitious and colourful first-person account of one woman’s quixotic search for meaning in her own becalmed life.

An entertaining ontological odyssey is undertaken in a vintage ice cream van named Alice after Lewis Carroll's eponymous heroine and becomes the vehicle by which Walker distils wit, wisdom and sensitively modulated poignant truths. The result is a quirky gem of a debut which is as uplifting as it is gently enlightening, and a book resolutely intent upon giving its reader considered insights, ribald mirth and a big-hearted metaphorical hug !

Walker takes a decidedly antithetical stance to that of Albert Camus when he said, ‘The literal meaning of life is whatever you’re doing that prevents you from killing yourself’. Though Walker uses her diverting novel and her chief protagonist Casey’s impromptu road trip to tackle the grimmest episodes of history and personal ennui, she playfully keeps her book bright, effervescent and emotionally comforting. Casey may not discover all the answers to her questions on her exotic travels, however she does begin another solipsistic journey towards becoming a self-actuated Being. Voltaire said, ‘judge a man by his questions, rather than by his answers’. Casey’s epistemic extravaganza precipitates very fine questions, compassionate responses and a just as importantly for us, a hugely enjoyable and enriching read.

Walker’s use of the Road Novel genre is a creatively imaginative means of addressing her knotty themes, whilst simultaneously producing a delightfully amusing book. On the Road by Jack Kerouac can be seen as the modern father of this diverse genre and Walker sensitively employs many of its components. We also have echoes of Robert M. Pirsig’s Zen and the Art of Motorcycle Maintenance, without Walker’s own novel descending into the impenetrable jungle of intellectual abstraction. John Steinbeck’s Travels with Charley: In Search of America, with his camper truck ‘Rosinante’, also presented itself to my mind. I also caught glimpses of The Electric-Aid Acid Test by Tom Wolfe and its day-glo painted school bus.

However The Scoop is not a lazy derivative rehash of established classics. It inventively draws upon venerated literary treasures and wise authorial musings to find its own contemporaneous, engagingly original voice. All literature is to some extent allusive, referential and creatively cannibalistic, however talented authors perform a dynamic metamorphosis upon that which has been expressed and give us something cumulative, but fresh. Walker is such an author.

The novel’s plot is best understood in terms of being an account of two co-dependent journeys, one literal and the other metaphysical. We accompany the book’s central protagonist Casey, ‘the relapsed daughter of a vicar’, an emotionally fragile lost soul, ‘lonely lesbian’ and troubled adoptee as she travels the globe and journeys into her own intellectual and emotional hinterland. Casey is heading towards a midlife crisis, puttering through a pointless existence, ideologically unmoored, unloved and alone.

As she regards her bland flat, a moment of existential ennui galvanises her desire to examine her spiritual lethargy, stilted emotions and mental disquietude. She confronts the asphyxiating knowledge that she is alive, but passionless, phlegmatic and perpetually in a state of unease. Casey decides ‘To explore the world and find meaning and purpose in my life – to find, in short, the meaning of life’. 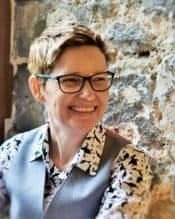 Cat Walker
So, the first journey we take is with Casey and her divorced best friend and inveterate lothario Dan and his truculent twelve year old son, Ari. Dan is searching for a bond with his estranged son and the terra firma of personal integrity and adult responsibility. His ex-wife, Niobe, is facing her own brave battle with cancer and Dan has inadvertently become the unwanted father figure in Ari’s tumultuous life. Ari is an almost catatonic bundle of resentments and longings, on the cusp of adolescence and moodily recalcitrant toward any attempt to understand or befriend him.

A converted ice cream van is hastily purchased with our motley crew’s meagre funds and does incongruous service as a gaily painted camper van. The unlikely trio set off on a six week adventure from Harwich to Tibet, via Amsterdam, Germany, Eastern Europe, the Czech Republic, Istanbul, Kazakhstan, Lhasa and Kathmandu.

The second journey we take is the one concurrently taking place in the unexplored back blocks of Casey’s psyche. In order for Casey to resolve her own philosophical dilemmas and find meaning and feeling in her life, she embraces the transformative power of questioning her own beliefs, whilst consciously attempting to truly understand those of others.

We are privy to her inner musings, doubts, demons and cogitations in the form of confessional diary-like episodes charting her travels. The reader vicariously experiences the forces acting upon Casey’s disenchanted heart and dissolute mind. The journey becomes a causative force, surfacing home truths whist subtly reconstructing Casey’s world view, sense of self and raison d’être.

Casey’s Cervantes-like literary expedition allows her and the reader to tour humanity’s strained attempts to organise its societies according to a heterogenous panoply of ideological systems and principles. We encounter a faux-utopia, drug-addled hippy commune, the Mauser Museum, Check Point Charlie, the Theresienstadt Concentration Camp and Jewish Ghetto, before witnessing the livid scars left by Slobodan Milosevic and his policy of Ethnic Cleansing. We explore politically variegated versions of communism and socialism as we take the Trans-Siberian railway from Russia to China and finally encounter doctrinal Buddhism high in the mountains of Tibet. Eschewing drily didactic expostulation for riveting storytelling, Walker gives us a pithy historical synopsis of the places we encounter, and succinctly explores the ideological paradigms and cultural zeitgeist of each node on the trios’ journey.

Thematically we are presented with a veritable smorgasbord of philosophical, political, religious and metaphysical concepts. Casey ruminates upon her experiences and says, ‘another of life’s strange little lessons to be mulled over, chewed and contemplated during the journey’. She observes, ‘What bewildering creatures we really are’. Confronted by anthropological variety and indeed horror, the dank waters of her psyche are disturbed and drained. Walker both playfully and poignantly absorbs us in one woman’s quest to authentically understand herself and the world around her. En passant of Casey’s own transformative journey, we explore personal responsibility, fidelity, emotional intelligence and the lack of it, the power of compassion and the restorative bliss of love itself. 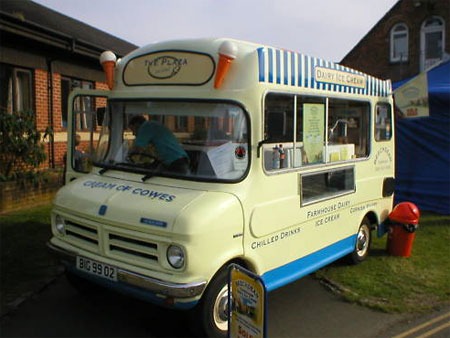 Walker draws upon a wide variety of literary tools to enliven her tale. Pithy epigraphs serve as Chapter headings seeding the pages that follow with the voices of Robert Louis Stevenson, Dante Alighieri, Horace, Confucius, Kahil Gibran, Henry Thoreau and my own beloved H.G. Wells to name but a few. Walker mines literature’s finest gems to colour her own prose and dextrously layer the book’s episodic structure with intellectual mood music. Walker favours a vernacular lexicon for her sparkling dialogue, whilst occasionally allowing herself almost lyrical descriptions of the places our trio encounter. Her pen though is predominantly restrained, neither hyperbolic nor ornamental.

Symbolism is yet another of Walker’s many strengths. The ice cream van, with its putative origins in the activities of New York-based Thomas Cavellos in 1929, is of course a modern iteration of Nero’s own love of snow flavoured with juices. A symbol of community, of innocent pleasure and mankind’s pursuit of happiness. Like Dominic Facchino, the founder of the Mr whippy ice cream company, Walker give us a refreshing ‘scoop’ of her own reflections upon life and its purpose. Casey’s beanie hat, Ari’s PSP and Dan’s beer swilling are all cleverly exploited for their reverberative connotations and casual realism.


Also by Paul Spalding-Mulcock...
'We Shall Be Forgotten' : In The Palace Of Flowers By Victoria Princewill‘Grief Can Make People See Things In A Very Odd Light’ : Body On The Island By Victoria DowdIt's All Greek To Me !Review: A River Called Time By Courttia NewlandAn Interview with Alice Ash - Author of Paradise Block
Casey, Dan and Ari are all well rendered, three dimensional characters. Walker allows us to witness genuine personal growth on the part of her vividly realised protagonists. Casey strikes me as being a fictionalised, if entertainingly exaggerated version of our author, perhaps allowing her to cathartically process her own questions and personal demons! This, of course, is pure speculation on my part, however believing it to be so did lend the book even greater resonance and force as its brightly-spun story unfolded.

The book is not without faults, though all of these may be forgiven given that they are not deleterious to our enjoyment or understanding of it. My chief complaint rests with ideological expostulations being staged as clunky confabulatory encounters with subject matter experts who stumble fortuitously across our trio’s path. From Arabella the ‘bourgeois socialist’ to ‘Piff’ the leggy Texan Bible basher, we are presented with a host of characters who are conspicuously introduced in to the plot as Deus ex Machina clothes horses conveniently garbed in salient philosophical, political or sociological positions.

Mr Yangis a pallid authorial advocate of Confucian principles, and for me, barely more than an ideological mule lugging his thematic load clumsily along the way. The same may be said of Sinclair, the spaced-out hippie. The artistic purpose is clear, however the delivery is at best a tad contrived and at worst perilously close to jejune. Forgivable faults in the round and certainly more bothersome, than significant.

Our jaunty tale concludes with Casey forming a set of Baz Luhrmann-like rules which deftly echo, but astutely expand upon, the lyrics of ‘Everybody’s Free ( To Wear Sunscreen )’. A truly delightful conclusion to a tale likely to warm the cockles of most readers’ hearts, whilst providing a thoroughly absorbing, intelligent and audaciously original book. The Scoop is a joy to read and a promising harbinger of the avant-garde novels yet to come from its author’s deliciously bohemian mind.


The Scoop is published by RedDoor Press
More in this series...
Girl In The Walls By A.J. Gnuse - A ReviewReview: Lightseekers By Femi KayodeAn Interview with Alice Ash - Author of Paradise Block‘ …Really Real Poor People, Surviving Alone Together’: Paradise Block By Alice AshInterview: Neema ShahKololo Hill By Neema Shah: A ReviewInterview With Catherine Menon - Author Of Fragile Monsters‘Ghosts Everywhere I Look. Ghosts Everywhere I Don’t’: Fragile Monsters By Catherine MenonInterview: Bethany CliftLast One At The Party By Bethany Clift: A Review'There Is No Such Thing As Fate, Because There Is Nobody In Control': My Name Is Monster By Katie HaleInterview With Frances Quinn - Author Of The Smallest Man'A Hero Of Our Time!': The Smallest Man By Frances QuinnInterview: Thomas McMullan, Author Of The Last Good ManReview: The Last Good Man By Thomas McMullanInterview With Nikki Smith - Author Of All In Her Head'I Don't Know Who I Am Anymore': All In Her Head By Nikki SmithHannah Tovey: An InterviewInterview With Cat Walker - Author Of The ScoopThe Education Of Ivy Edwards By Hannah Tovey: A Review