Beer Of The Week: Old Peculier - At The Craven Arms, Appletreewick

‘We don’t want it to be madness when pubs re-open,’ says David Aynesworth, who has been landlord for the last fifteen years of one of Wharfedale’s finest pubs. Some would call The Craven Arms at Appletreewick, the finest. Standing, as it has from the sixteenth-century, at the heart of the dale, a stone’s throw from the famous brown trout river, it offers stunning views across to Burnsall Fell and over to Simon’s Seat.

David and his dedicated staff intend prudently to open two days later than most of the rest of the country, on 6th July, in order to see how the land lies. He remembers some weeks ago at the first sign of hot weather people came flooding into the idyllic village ‘parking anywhere, hammering on the door.’ They were not his usual clientele and more suited to Magaluf, he reflects.

His chief concern is for the well being and safety of his staff, his locals and the regulars who come from all over Yorkshire and Lancashire. ‘We need to make sure everything is in place and that we are used to the new systems and can operate them safely.’ The beer garden is now a wi-fi zone and all orders can be taken on line, payment made by contactless means rather than cash.

Obviously, the pub won’t immediately boast its full range of draught beers but there will be our beer of the week, truly one of the world’s greatest, Theakston’s Old Peculier, plus a choice ale from Dark Horse Brewery and a beer from Littondale, from a firm of very recent origin, Lamb Brewery (which I’m looking forward to sampling). Good food will be available, although from a slightly reduced menu. 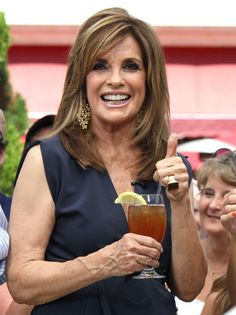 Linda Gray (Sue Ellen)
During the lockdown the team have been able to redecorate and refurbish quite considerably – whilst still keeping everything traditional, David reassures me. Who would want to change this beautiful old pub, with its traditional beams and gas lighting – a corner of old England that seems to have attracted some of the world’s most beautiful women like Linda Gray - Sue Ellen, from Dallas - who absolutely charmed the locals, Teri Hatcher - Lois Lane in The New Adventures of Superman – and, not exactly least, Keira Knightley. In such company it almost seems unnecessary to mention that members of the Emmerdale cast often drop in.

‘Normally, it’s like trying to repair an engine that’s still running because a pub never stops,’ David says, graphically, ‘trying to make refurbishments and changes – but during the compulsory break we’ve managed to make a lot of improvements’ . The snug has been completely refitted. There’s been lots of painting going on and there's an all-new cleaning regime.


Also by Andrew Liddle...
Georgian Theatre Royal Gets Grant To Boost EnvironmentChick Corea, Colossus Of The Jazz KeyboardMagic Rock Zooms In With A New AleTop Of The Hops: Magic Rock’s Eight HaulA Dumb Blond In Charge Or A Malign Force?
One thing seems certain: David, his son Robert and the staff, for whom he has the highest regard, will be ready on the sixth of next month to provide their usual warm welcome and high standard of service. I hope to be there to bask in the sun and sup a pint of our Beer of the Week, Theakston’s Old Peculier, brewed in Masham.

It needs no recommendation from me with a pedigree stretching back 180 years and, at 5% ABV, packing a punch to appetise you for lunch. It’s beer that seems to be made to go with the Sunday roast. I pour myself a bottle of it now to remind me of what awaits, see it settling a dark mahogany with a hint of ruby beneath a tan head, get the heady waft of fruity caramel and yeasty raisins and then that piquant sapidity that makes this such a popular beer in the Dales, nay in the country, ‘the legend’ that people coming up from the south so often ask for.