Saltaire Blonde, a beautiful peachy-coloured pale ale, brewed in the heart of the West Riding, with a light refreshing taste, is my beer of the week. 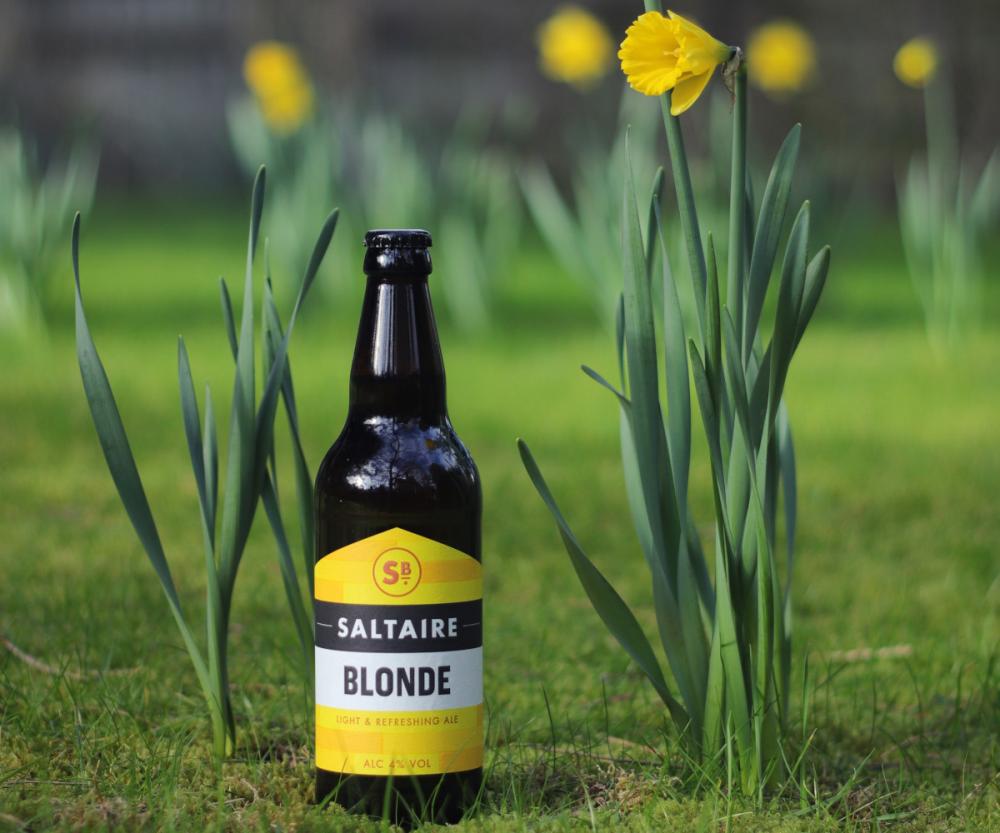 It is fitting that I begin the series with this appealing beer for a variety of reasons. But, first, let me very briefly set out my aims and good intentions. Whilst we can’t get out to the pub, we need to think carefully about what we are going to drink in bottles. As a beerman, someone who sups the stuff in its many forms and varieties and never takes any other form of alcohol, I have been giving it particular thought and have decided to do some informed tasting – in moderation, of course. As a former member of CAMRA, I suppose I know the jargon (although I don’t much like jargon) and after a lifetime of drinking the stuff I reckon I have as much right to pass judgement as anyone else.

Saltaire Blonde is an obvious choice for me to begin with. I went to school in the village - which is situated on the River Aire a few miles from Bradford - long before it became a world heritage centre and, as a student, worked in its famous mill. To me, back then, it was never just a smoky milltown but a wonderfully romantic place and I retain a fascination for all things Saltaire. So I make no apologies for beginning so personally what I hope will be a wide-ranging selection. I also rejoice in the irony that the Victorian model village, that its founder, Sir Titus Salt, decreed must be teetotal, now gives its name to a nationally famous beer. Indeed, Saltaire Brewery also make a splendid bitter called Titus!

The last thing I want is to appeal only to the self-styled connoisseur. Beer is - or rather was - the workingman’s drink, voluminous enough to slake the hard thirst, with enough alcoholic content to give the moderate drinker a feeling of ease and well being. Even after decades of marketing by the brewing industry to widen its social appeal and to encourage more women to drink it, it is essentially the drink of choice for the ordinary guy.

The real ale aficiandos, malt mavens and epicurean scholars borrowing their terms from the wine buffs have got their own esoteric publications and forums. And the barley pop merchants probably don’t read anyway! So I will be writing about bottled ales and lagers, real ale, craft beers micro and macro-brewed – and I think there’s no better place to start than with this golden beverage brewed, actually, in Shipley’s Dockfield area, just a short stroll along the canal towpath from Saltaire.


Also by Andrew Liddle...
The Lonely Chapatti’s Food For ThoughtThe Nomadic Life At ChristmasTerriers Get The Magic Rock For ChristmasLaughter In The Dark In Leeds - From The Devil’s JukeboxFalsgrave Park, The Town Crier And An Upturned Santa
Technically a pale ale, Saltaire Blonde might also pass for a lager. I know many lager drinkers who consume it with relish. With an ABV of 4%, it is strong enough but not punishingly so. I love the earthy hoppy incense that puts me in a mellow mood even whilst I’m pouring it. The hops come from the Czech Republic, where they know a thing or two about brewing. The lightness of colour comes from the pearl malt. I would describe the colour as peachy, especially when held up to the light, although the label has it as straw-coloured, a tad unflattering I would have thought. The taste to my palate is exquisite, lightly floral, a pleasingly unsweet citrus. I’m gratified to say it has next to no head, apart from a creamy top at the time of pouring. The bubbles too are evanescent. Some pale ales leave a slightly bitter after-taste: this does not. This is a beer of real character, combining Yorkshire candour with a touch of Bohemian flair.

I have to remind myself that the independent Saltaire Brewery, one of the earliest micro-breweries in Yorkshire, was founded as recently as 2005, because by now they are so well established producing more than 5 million pints of beer a year for drinkers around the globe and have scooped numerous trade awards, including two national championship brews and four international gold medals. Currently, they also produce, among others, their Triple Chocoholic stout; Cascade, their American pale ale; Titus, a rather good English bitter and Amarillo, a golden ale. Doubtless, given time I will review some of these also.

Their story begins in 2003 when owner and founder, Tony Gartland, met Derek Todd, an industrial chemist, on a brewing course in Newcastle, the two discovering a mutual passion for brewing real ale. From the humblest beginning with little more than a 20-barrel (a barrel of beer is 31 gallons) Moeschle brew kit, they were soon producing as many as three beers a week, before in 2007 launching Saltaire Blonde and Cascade Pale Ale. Fourteen years later it has grown into a 40-barrel brewery producing 20,000 hectolitres of beer annually with its own packaging plant, Tap Room and brewhouse events space.

Clearly the Covid crisis has hit the brewery very hard with more than a thousand outlets they supplied, pubs, bars and restaurants, having to close down. The workforce, nearly 40-strong, led by managing director Ewen Gordo, are responding with typical Yorkshire grit and determination.

Almost overnight their focus has switched from producing regular and seasonal cask beers, to focusing on its 500ml and 330ml bottle and 330ml can production for off-licences, supermarkets - and, not least, home delivery across West Yorkshire.