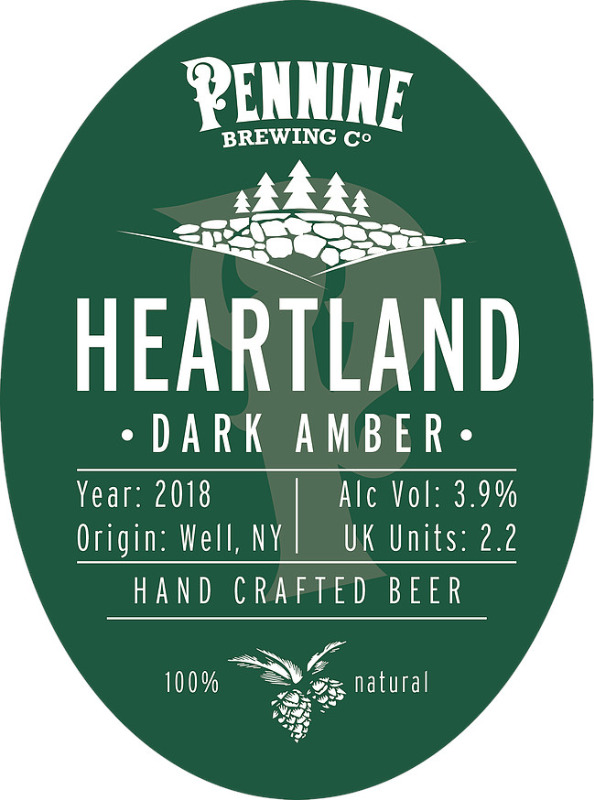 It pours with a glow like polished mahogany and has a deliciously creamy head. It is a genuine pleasure just to behold Pennine Heartland, still more to take the first heady quaff. It is my beer of the week.

Describing it as ‘a dark copper-coloured traditional ale with a toffee, malted-caramel smell and a rich, smooth flavour’, as the website does, puts it pretty much in a nutshell. I would add that it is rich and full-bodied and does, indeed, give off a pleasingly malty-hoppy aroma to match the inkling of caramel - and the palate is genuinely delighted and intrigued, detecting much more, maybe a suggestion of nectarine balancing the hoppy bitterness. It has an ABV of 3.9 and is ideal for drinking all the year round.

It is one of a full range of excellent craft beers produced in an18-barrel micro brewery by the Pennine Brewing Company, founded as recently as 2013, in the little village of Well, near Masham, in Bedale. Heartland is well-named because if you look at a map of Yorkshire and Humberside, this place does seem to be about bang in the middle.

‘Most of the beers we do are traditional,' says award-winning Head Brewer, Tim Butler, ‘appealing to drinkers in a rural location.’ He waxes lyrical about ‘the legendary Yorkshire water’ which allied to the finest malt and other ingredients makes fine beers. ‘We try to use a variety of hops to suit the differing styles of beers and we are even trying to make a commercially available brew using hops grown locally.’

Tim, who has been with the family company since the beginning, having so far brewed more than 3.5 million pints, crafts new ones lovingly and knowledgeably, very often after considerable research. He gives me an instance of this, explaining they have recently reintroduced an old-style Chevallier Malt to brew their Cellar No3 IPA. This was the most popular barley malt from about 1820 onwards before the move towards Maris Otter in the mid-1960s, which is still very popular both in home-brewing circles and among traditional real ale breweries.


Also by Andrew Liddle...
The Lonely Chapatti’s Food For ThoughtThe Nomadic Life At ChristmasTerriers Get The Magic Rock For ChristmasLaughter In The Dark In Leeds - From The Devil’s JukeboxFalsgrave Park, The Town Crier And An Upturned Santa
This particular IPA has been crafted in collaboration with Vale of Mowbray Pork Pies, whose factory is located nearby in Leeming Bar. Before becoming manufacturers of excellent pies, they were actually a brewery, Plew’s. Tim’s intention was to produce a beer to complement the pies, from ingredients that Plew’s would have used in their beer. The consensus of opinion is that he has done just that and the two might have made for each other.

Tim is currently studying for a Beer Sommelier accreditation, and but for the Covid crisis would have had his assessment a couple of weeks ago. That must now be put on hold but happily the beer production is still in full swing. ‘We have moved our efforts into supplying households, through home deliveries and delivering to shops or suppliers,’ he says, nothing daunted. ‘We will continue to adapt to these changing times and provide more range and types of packaging such as bottles, cans, minikegs - to provide high quality beer to our customers.’

Their other permanent bottled beers include Black Forest, a dark ale; two IPAs, Cellar No3 - already referred to - and Pennine; Millie George, a blonde; and Tan Hill, an amber ale. Seasonal beers are issued to celebrate various events, usually of local significance. In my experience, you can't really go wrong with any of them and I intend to feature others later in the series.

Their bottle range is widely available in independent retailers across Yorkshire. They also deliver to Lancashire and the North East. To find out where it can be bought visit their website: www.pennine-brewing.co.uk or ring 01677 470111